I would describe Dariusz Mlącki as a painter who plays on the most subtle tones and values. Even on a small piece of painted area, a Bach-like play of sounds is set and occurs. The paint is applied with extraordinary tenderness. Next, it is turned into a colour, and the colour is turned into light. The pictures seem to radiate out their own light and energy. The value, the gradations of white, from dark or dusky up to sunny, become the means of expression and dematerialise the matter, whilst spiritualising the planes or objects being painted. Despite its ‘our contemporary’ painted record, I would refer Mlącki’s painting art to the one of such masters as Piero della Francesca, due to the luminosity of the colour and the respectable quality, and Morandi, due to the metaphysical quality as achieved by simple and disciplined means of expression.

What I like about Mlącki’s paintings is a temporal-and-spatial suspension in a piece of painting, hiding what is important, and, a high degree of spiritual saturation. It would not be proper to attempt at analysing this art in the context of what is on as regards the ‘network’, ‘obligatory’ art, with its peculiar message to convey. By this I mean straight-forward communication, throwing some irresponsible, arrogant mass against one’s face. It would be equally improper in to do so in the context of postmodernist freedom or randomness, deprived of a spirit and of any individualism. Mlącki’s art needs being watched with greed, and its underlying secret needs being unveiled. It needs being considered as a unique phenomenon, apart from any fashion or stylisation.

This is a set of sculptures, paintings and designs made of wood, string, wax, paint, and some found objects. The works were created over several months, carefully wrapped up in with a thin thread. Both the exterior and and the interior have gained a new quality through the drawing emerging from the threads. I would call is an obsessive investigation into the shape. The interiors are composed of a Sarcophagus, rock-and-tree mass, a still-life with a sheaf, a landscape, and oil paintings of the ‘Windows’ cycle, with their illusionistically painted frames. In the black interior, a spiritual coherence is stiking as appearing between various disciplines. Painting becomes an object, fabric, or sculpture; a sculpture turns into a drawing. The works seem well known and close to use, but it is rather hard to tell what they really are. Their nature is unambiguous, as if suspended between functions being remote from one another. They exist like separate beings, some fetishes. The light, sliding across the black interior, is at times turbid, hazy, only to glitter shortly afterwards, and eventually disappear in the bends of the black string.

This is a series of illusionistic works. A window, candles, tables, switches, ventilators have formed the main theme here. Empty paintings, not infrequently comprising but one element – such as a frame or candle – evoke Renaissance windows, the magic of light as in early paintings, tenderness, and the inevitable death. The window frame is the frame of the painting. The eye has been deceived, led astray into an empty place; the viewer is tempted in a negative field. Piotr Rypson, one of Mlącki’s creative output critics, wrote of an attempt at reconciling the opposites, which causes the sight to wander across the painting, and gets beyond it, to discover the secrets of the painting’s space and the space around it, which complements it. Tracing the consequences of the process and the incoherencies of the illusion, being created by the painter in a clever, and sometimes indeed perverse, manner is the essence of Mlącki’s most recent works.

At his exhibitions in Podevil, Berlin, and Orońsko, Mlącki hid his works, or indeed the painting art, by placing objects in customary venues. That is, a ‘Door’ was fixed in the place of the door; a ‘Ventilator’, where the ventilator was supposed to be placed; and so on. In Orońsko, a table with stools was cntrally placed; this was, actually, some small glass cubes on which the artist had painted the pieces of furniture. Those objects do and do not exist at the same time. They do not exist as a function, yet they are there, on a customary basis, in our consciousness. The borderline has again been shifted. An identification takes place as you approach and actually touch the object. The trick played on the viewer is of a positive nature here, since the watching person gets his or her bearings and then feels a relief at discovering that he herself, or she herself, is for certain a (piece of) reality.

This idea got materialised in the form of the recent cycle titled ‘Envelopes’. In Ujazdowski Castle and in Otwarta Pracownia [‘Open Atelier’] Mlącki has shown a compelte set of geometric envelopes, from monumental, five-meter high ones, down to small, virtually natural-sized ones. To make a blue envelope, the artist availed himself of a radioactive pigment taken off from the hands of alarm-clocks made in the seventies. A joke, that, and at the same time, a dream coming true about a painting radiating its own energy. Again, a well-known, and universal, shape. And again, a mystery, it being impossible to open the envelope to reach for a letter inside there. A tension before you get a meassage. Marked envelopes is a series of fifty envelopes-paintings furhished on both sides with five stamps each, and hand-painted post-stamps. The letters have been released to circulate somewhere out there; again, some mysterious message, that. It is really difficult to talk this art over. It is better to watch it. Not to think, but just see, as you may by accident discover you’re amidst a desert, on your own. 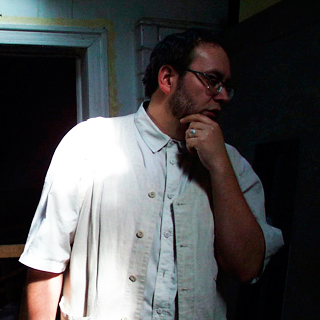 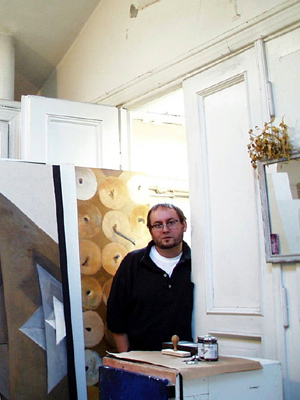