Hawker Fury. The name was coined to add, or inspire, terror. In reality, the machine’s structure was tiny and rather delicate. The gentlemen who mounted it used to paint coloured chequered patterns on it. As if the plane was not supposed to fight, but rather, to race. These days, in the time of those flying buses, Hawker Fury’s shapely silhouette evokes nostalgic associations: with the ‘retro’ age indeed, the one of The English Patient, or, Farewell to Africa. But then, it did seem futuristic. Elegant, and cold. Pilots used to like Hawker Fury but treated it with respect, considering it to be an elitist plane. 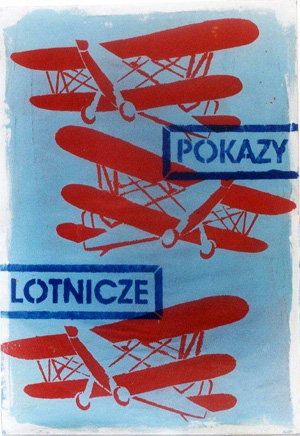 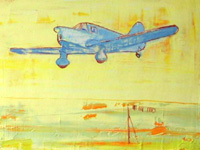 De Havilland Dominie. Antoine de Saint-Exupéry used to carry mail on one such plane. A weather forecast. A sunrise in the cockpit. Fighting with the headwind. Listening carefully to the engines, rattling. Long hours spend over the rocky Ands, a Morocco desert, or waves of the Atlantic. The radio-station grinding. And, the landing, at last. A trolley on the landing ground, waiting to meet the bag of mail.

Sandeep, a Indian friend of mine, was brought-up close to an airport, at Bombay. As he goes back in his mind to his earliest recollections, it was Dakota planes serving as travelling means in that huge country of his. Dozens of years passing, the broad ‘airport meadow’ still saw these same Dakotas arriving and departing. Their languid, larva-shaped fuselages may still be met there, even today. They have not ceased to transport anyone having ten dollars in his or her pocket to get a ticket and who is not really willing to walk all the way long on foot. These machines are kind-hearted and useful indeed. In Casablanca motion picture, a Dakota waits patiently till Ilse says goodbye to Rick, and then, lifts her up into a safer world.

Moth is an aircraft for loners. As the very name tells, its time is night. Providing that some stars are visible. It’s the stars that cannot allow you to vanish completely. They prick the surrounding space with light. The rustle of air and the hardly-audible clatter of the engine, just like a whirring of a moth’s wings, trapped under the dome of the sky. A pure pleasure of flying. Flight for the flight’s sake; an art for art’s sake.

The resistance of matter is exasperating. We yearn for something that’s pure and lofty in itself, not powered with everyday toil. We would like to rise lightly, to leave the ground. In our dreams we fly. In Jacek Lydzba’s painting those dreams come true. The Earth is a planet of angels and various flying machines. When we’re already airborne, we see many interesting things from above: a cyclist, a worker with a wrench, a girl with a rifle and a wolf. Is it that new painting subjects are discovered when flying? What boyish impudence! But then, why not? As long as your tank’s full of dreams... That’s what Jacek is like.