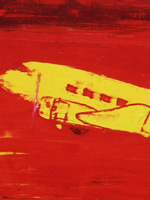 Apollinaire, who was among the first people to see aeroplanes fly, added the sight to the canon of Christian associations – I will not say „symbols”, although a symbol is always based on some kind of association, because at that time that particular canon was crumbling, or “had been had enough of”, just as today we’ve had enough of the avant-garde canon and our first association with a sewing machine is no longer an umbrella, but the Singer café in Cracow, considered to be the oldest and almost pre-war. In the twentieth century every association had the weight of a symbol, or maybe its lack of weight; we lived surrounded by rank-and-file associations which we only now, posthumously, award medals and include in a roll of honour. One of those is Apollinaire’s association: Christ as the „pretty pilot”, stretched on the Cross and ascending to Heaven: everything about it buzzes and hums, it’s ever new and fresh. After that, it was the ultra-Catholic Saint-Exupéry who became interested in aviation, with less stunning effects; I don’t even remember how the Little Prince travelled from one planet to the next. The conquest of space spoilt something in our religiousness; a spaceship is phallically straight, with no arms or wings. To add one more theme: Apollinaire’s Zone was translated by Adam Ważyk, who towards the end of his life wrote the dazzling poem Lot (The Flight), in which an air hostess’s pantomime sends passengers into a dream of a “fabulous land of gold mines long exhausted”, a land that is as much surrealist vision as description of our world, with its “exhaustion” despite seemingly “fabulous” opportunities.

Such is the set of associations that come to my mind when looking at paintings by Jacek Łydżba, or more specifically at the one which I saw first, on the wall of a friend’s home, or maybe it was just in a postcard? I still have that postcard and now I wonder how come the painting is titled Night Flight, since such illumination of air, sand and sea happens only in daytime, and the spectral aeroplane is one of the most Apollinaire-like I know. Only (at least that’s how I explain it to myself) it is „in the hands of the Alpha and Omega organization” and is headed for Ważyk’s Ofir, where all we’ll ever get to do will be to sit “on a blackened tree trunk” and stare at a termite colony. “Who will redeem us, and at what price?” – so ends the poem and the picture. 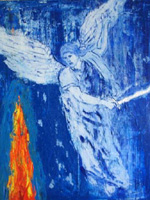 Les anges voltigent autour du joli voltigeur / Icare Énoch Élie Apollonius de Thyane / Flottent autour du premier aéroplane – this theme could be continued, as Łydżba is obviously interested in flying creatures and machines; the second (and even the third) postcard that I have unearthed shows angels. Łydżba’s angels are conventional, feathery and might be reminiscent of Icarus, were it not for their obvious femininity, which, incidentally, is one of (I think) five possible ways of representing them, the other four being baby angels (Pankowski made the putti the patrons of paedophilia), angels as gracefully swaying young men (as in the Corpus Christi church in Cracow), avenger angels armed with swords (one of which hangs in Nürnberg, scaring visitors to the local museum), and the pure, invisible essences known only from literature. A woman angel is the least worthy of those, especially if we remember that at the time when angels were created women were not there yet (nor men, for that matter.) She is an image formed on the basis of verbal caresses such as “Oh my angel, give me your hand” (“O mój Aniele / Ty mi rękę / Daj” (Adam Asnyk). In Łydżba’s paintings one is wearing a wedding dress (with the wings substituting for a garland), another is holding a drum, as if rehearsing a cabaret version of Apocalypse. They are sweet images, which one should run from if one wants to preserve purity of imagination. Icarus of the myth has been replaced (in Leonardo’s painting) by a flying reptile, later reduced to the form of a flying fish, which chooses pure jet power over an atavistic flapping of the wings. That’s why I consider the aeroplane paintings to be more religiously original, touching the essence of things, faithfully transcribing the hieroglyph of Modernity.

Interestingly, other, non-winged figures in Łydżba’s paintings also have a distinctly angelic character. For example, the pair of Boys are simply little angels brought down to earth; the painting Man and Youth is reminiscent of the biblical Tobias with the archangel Raphael, for example, as depicted by Perugino. The fantastic motif, reinforced by many centuries of imagination, has been domesticated, like a chicken or goose, or even made human in a manner characteristic of our times (compare the film characters played by Bruno Ganz and Krzysztof Globisz). An angel turned human is a special variant of a fallen angel, driven not by ambition, but by a need for ordinary earthly love, understandable if we take into account the popularity of the notion of “God’s death”. Let’s note, however, that Raphael had no wings either; his angelicalness was revealed through purely intellectual qualities. We can therefore reason á rebours that it’s not the angels who need us, but we who need them, and in a basely erotic way, as the people of Sodom needed those who had the bad luck to come there. And what did they need to go there for? Łydżba’s paintings give no unequivocal answer; we see his angels in wide, open, empty spaces, as if even a dog wouldn’t bother to chase them. The are waving at someone, calling someone, and nobody knows whether that is someone they might look after or someone who might look after them. 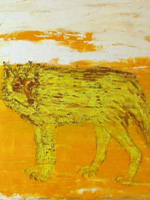 A real painter should be able to paint a dog – vide “The Arnolfini Marriage” or Brainard’s whippet. Łydżba paints wolves (or are they Alsatians?), apparently howling at the moon; the atmosphere is nocturnal, a wolf like that expresses metaphysical despair and is poles apart from an aeroplane; it is always a bit crude (or rather unfinished, like the toy dog in Beckett’s Endgame), so it deplores its imperfect introduction into matter, thus becoming an ideal medium for demonic forces. The companion dog is here unaccompanied, separate; other, event more sketchy versions of its own head are all that’s available to him. Does it represent the artist (in an exhausted world) or is it an object of condescending pity (we know artists who delight in other people’s despair)? This wolf needs an angel, its angel is a human, but he has left it in the forest and boarded a plane. Unless he’s riding a... 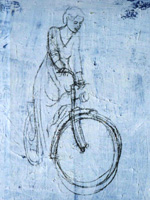 bicycle. That form of transport, albeit simpler, is almost the same age as the aeroplane. The idea of flight is replaced by the less alluring, but also respectable idea of balance. Invented for the poor, who can afford neither a plane nor a car, or for those who like gradual improvements, who would like to move faster, but not too fast, without noise or fumes, with angelic grace. Painting a bike is hard work, all those spokes and cogwheels are not as naturally painterly as the gleam of an aeroplane, a dog’s coat or even an angel’s plumage; yet it’s worth the trouble: a bike looks friendly in a painting, it has a holiday dimension to it and a certain relaxing power, of which the motorcycle, favoured by hyperrealists, has none. Nobody rides the bikes in Łydżba’s paintings; they are pushed by beautiful women, they accompany them like dogs, perfectly useless, yet remaining at their service. A man on a bike evokes too strong associations with cycling as a competitive sport; the combination woman plus bicycle is wonderfully idyllic, it can be a model of a contemporary Arcadia in itself. A bike is present where we forget both the lofty and the grim side of our metaphysical situation; it moves horizontally, along a path leading somewhere not far away. It would be nice to remain there.

The bicycle was introduced into literature by the pataphysician Jarry, who rode one in as a naughty boy playing tricks. In visual arts we encounter bicycles in numerous Chinese woodcuts, where it fits in marvellously with all the umbrellas, pagodas and crane legs. Maybe that’s why Łydżba paints so many Chinese women, although his bikes are rather pataphysical in character; if someone added wings onto them, they might fly. For the time being, they remain stationary, but it’s clear that their owners have only stopped for a chat: their faces are animated, captured in several versions, focused on worldly matters. The painter uses those moments, behaving like a nineteenth-century photographer, unable to record anything that moves. Jarry also appears to be riding in his bicycle photos, but each spoke is perfectly visible – how come?

All those things add up to a childhood picture for me: myself on a bike, a dog running by me, aeroplanes above, and an angel with a sword behind. Only now the bike, the angel, the dog and the plane have moved apart and are stuck on separate backgrounds.