Did you already know you were going to paint pictures when you were a child?

In the last year of primary school, yes; but that was my second idea; the first one had been to be a naturalist.

Did you keep to that first plan long?

No, I really only thought about it in the first two years of primary school. I lived in a forest then, in a forest ranger’s house, and maybe that’s why.

In such surroundings it was only natural; but after moving back to the city, did thoughts about art return, or maybe was it family tradition that decided it?

I had already painted earlier, before I wanted to be a naturalist, but my family did matter, because they showed more acceptance. My Mum said it was the most difficult job one could choose, she kept telling me not to do it and to find something that gives a steady income and a more stable existence.

Was your father an artist too?

No, my Dad is an engineer by education, and now he breeds horses.

Let’s return to painting. After finishing primary school, did you already know you would go to the visual arts high school?

Yes I did, especially as I also attended preparatory drawing classes.

And what was it like in the art school?

When applying to the Academy of Fine Arts, did that give you a definite advantage over your peers who had gone to ordinary secondary schools?

People from our school usually had more works to show. We were given so much freedom that we really could paint, we had the time, but of course one could use that time differently. I could have shown up for painting classes once a month and I would have passed all the same. There was no strong pressure to paint. The requirements did not exactly coincide with what I did - I focused on studying the model, and what was expected was large sizes and lots of expression.

Does this mean there was no model?

There was one, but I would also go to additional classes. And besides, the manner of painting a model which the teachers required was completely different from mine; they wanted expression, not anatomy, and I wanted to draw studies of nudes from a model because that was what I wanted to learn.

Why were you convinced that that was what you should learn?

At the beginning of secondary school I relied only on talent and painted those large, expressionist compositions. In the first year I had an exhibition in the school corridor; it was obviously approved. But then I resolved it made no sense just to draw on what I have inside, that I must finally learn something, because if you know how to do more it gives you more possibilities. That’s why I decided to study the human figure while in secondary school, the way it used to be studied once. That’s what I planned and that’s what I did. I filled ever so many sketch-books. I drew my classmates, but without any intention of creating finished works. They didn’t look very interesting, they were just studies for studies’ sake. Maybe that’s why they were not very well liked there.

Does this mean that, in your opinion, it is necessary to know how to paint a man in order to continue painting?

I don’t think that’s a rule. I thought that what I wanted to show... and that changes, of course... I wanted to have a certain facility, so that when painting a hand I wouldn’t have to wonder how it’s done, but would be able to it freely, easily. But these skills don’t have to be a rule. There are people who paint very well without them, but I needed them.

And so it happened that you stuck to painting from a model for a while. Only in the most recent works did you start to create more complex compositions out of those figures, those studies. Are you now conscious of using the knowledge and skills you acquired?

It really did come about gradually. First I did coloured drawings (my mum was terrified that I had no sense of colour whatever), then I introduced colour in the next studies, and in the next I started composing the whole; it’s even a bit funny, but that’s the way it was. Now everything is completed, as there are all the elements necessary to a painting, but I don’t want to stop at that and just paint. I still often make rough studies, which I then use when painting. I would like not to lose those skills. But I also do paint without sketching, or change the whole composition while painting. Sometimes I pose for myself while working on a picture and add missing elements. Of course I always start with some proposition, but I don’t always fulfil it.

What is striking in your paintings is that you are usually your own model. Why?

To be honest, it’s a matter of comfort. I like to be alone when I paint. Even if I need a model, I make a sketch first and use that afterwards. I lose too much energy in contact with a model and then I find it more difficult to paint.

Maybe I’m already a bit bored with myself, so I like to deform myself and if I come out unlike it makes me very glad. I’ve seen too much of myself. There were such three months once when I did some two hundred self-portraits.

Sounds as if you’re hard-working.

When I still painted at the academy, which I don’t do any more, I was regarded as an insane individual who paints instead of sitting and talking like everyone else. I do not consider myself particularly hard-working. When you paint, you just have to work to achieve something.

I have the impression that you treat painting as a way of life. There is something 19th-century about such a conviction.

I think it’s the only way that makes sense.

Are you satisfied with what you’re doing?

There are such rare moments, but they are really rare. I have a very emotional attitude to everything I do, but I always try to make it as good as possible. Especially now, when I’m trying to paint pictures and not just studies. Every painting should be a height, and that’s very difficult. Before, I used to treat my efforts with more indulgence.

It is a real pleasure to observe the increasing complexity of your works. Is this the result of gaining skill and self-awareness, or is it that you look at a lot and it gives knowledge, making you see more?

It’s that too. At the same time the painters I’m fascinated by change continually. I often used to “think different painters”. When creating compositions I thought, this a la ....and this a la .... I suppose it was a little dangerous, but I didn’t want to go against it, to fight it.

Well then, whose influence did you yield to?

Early Picasso - longest, I think - then Klimt, and now Balthus. And before that there was Caravaggio, Leonardo da Vinci for a while, and now mostly the early Renaissance: Giotto, Massacio, Fra Angelico, Piero della Francesca.

Your paintings are immersed in the past. It seems that old art is more inspiring for you than the reality around you.

I think it is so. Of course I must be interested in my surroundings to some extent. The places I paint are usually some existing places, I don’t even have to paint, it is enough that I think about them. My compositions are usually form nature; in this sense I do communicate with reality, but in the style of my paintings there is more of old that of contemporary art. Although interesting things are still created and I like some of them, I’m not too much at home in what is done now. But in the end, everything in art is connected and it would be difficult to mark firm boundaries.

Looking at what you used to do and what you do now, I see a good deal of Balthus in your paintings.

I think he is a kind of model now. Not his artistic path, but just the attitude, which looks a bit like escaping from reality. I think art does not necessarily have to respond to the times in which it is created. For me the most important thing is to convey what really is on the painter’s mind. If he doesn’t care about what’s happening here and now, it makes no sense to try and show things he doesn’t feel or experience. Of course this can change in the future. If a couple of years ago someone had shown me he the things I paint now, I might have been dissatisfied with the direction it’s gone in.

You paint pictures of small sizes. Is it because painting takes you so much time?

Yes, it is mostly because of the time, but I’m also afraid that if I continued to work on a painting longer, old ideas would mingle with new ones on the canvas and the painting would grow terribly eclectic and its whole original idea lose sense. The composition would fall apart, some novelties I hadn’t planned for would appear. At the moment I can’t do otherwise. When I learn to paint with greater ease, I’ll move on to larger sizes.

Tell me where the colours come from in your paintings - they are not very realist, are they?

Usually from the overall design, the general concept. Where that comes from I can’t tell. It may sometimes be inspired by art, but most often it is the harmony, the play of colours. There are of course examples of painters who did this well, but usually I just want a particular combination.

And the idea for a picture, a particular composition - where’s that from?

In smaller pieces it can be some specific observation. And in paintings it’s nearly always an almost mathematical calculation: this should be there, and this, and also this and that. And the idea frequently emerges while drawing. I find it easier to order things by drawing than by thinking. Sometimes I have to spend a long time drawing in order to get the idea I need. And sometimes I lie in bed and think up four pictures at the same time and just get up in order to note them down.

And what are your paintings about?

About life, maybe? But for me they are mainly “compositions”, because what I primarily think of is that there should be a larger figure here, and here some object of a certain size, and some kind of stories get built out of that which turn out to be connected with me, even though I didn’t plan anything of the sort when I started painting.

It seems to me that the reality of your paintings is more important to you than the reality which surrounds you and that you prefer to stay in the one you painted.

I would prefer not to think so, even though I suppose there is some truth in that. If work is most important to someone, what they do is a different world from the surrounding one. But I try not to be that way, for it can be dangerous. 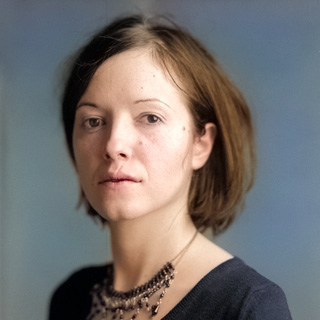 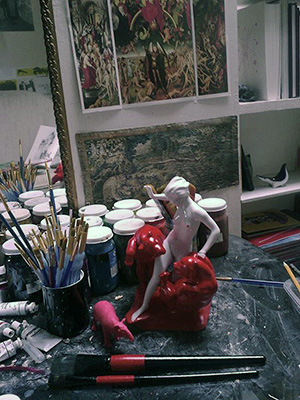