Podkowa Leśna. An old wooden house with lots of soul… Not that big, but quite spacious. There’s enough room to house pieces of art, books, a random collection of interesting objects, records and drums.  Anna Podlewska, painter, and  Paweł Polit, art historian and exhibition curator, are telling us its story.

Małgorzata Czyńska: We’ve kinda pushed into your house. It was Wojtek’s idea.

Wojciech Tuleya: As soon as I’d visited you for the first time a few months ago, I started persuading Małgosia to come to see you and encourage you to discuss your house. 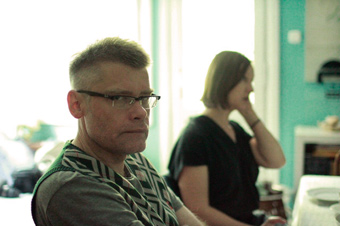 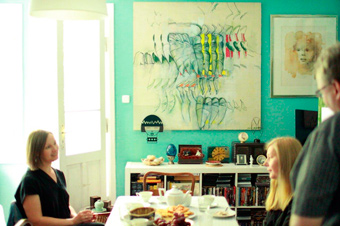 Anna Podlewska: You didn’t have to try too hard… We like our house, it’s a great place to live. It is quite spacious and has some beautiful light. It’s tolerant of its owner’s (Paweł) procrastination. The staircase is quite cold in the winter. And the house is far from being soundproof and it’s impossible to do all the overhaul works once and for all – there’s always something left to be done here.

WT: As soon as I’d come in, I was intrigued with its modernist wooden architecture. It’s quite peculiar, if not weird.

Paweł Polit: But there’s a method in that weirdness. Wood was an evident choice, cause my maternal grandfather - Henryk Albrecht – who built the house was a forest engineer. That’s probably why he chose this kind of material. The house is made entirely from wood. With time, an external layer of plaster was added. We owe the design to the architect and engineer Zofia Ruśkiewicz whose office was located at Smolna Street in Warsaw. The oldest version of the architectural design kept till these days features the date of September 28th, 1938.

MC: In the 30s of the 20th century Podkowa Leśna – a garden city – became a place to be.  Warsaw’s intellectual elites and establishment representatives used to build there their summerhouses which were often used as regular residences as well.

PP: My family hardly comes from Warsaw, but in the end we made it to Podkowa. My grandma - Maria Albrecht née Tokarska – who was a teacher came from Sosnowiec, while my grandpa was raised in a mansion near Opoczno before entering the Faculty of Forestry in Poznań. Once married, my grandparents lived in Serwy forest division near Augustów. There was a lot of buzz around plots of land in Podkowa at that time, so my grandparents bought one of them as a means to secure their future, though probably they wanted to move here one day.

WT: Did they manage to complete the works before the war?

PP: The house might have been completed by 1938. When my grandma Maria moved here in 1939 with two children, a shell building had already been erected. Grandpa Henryk joined them one year later.

WT: Were you raised in this house?

PP: Not really. I moved in no sooner than after maturity exam – three years after grandpa’s death. To be honest, this house was a huge burden for me for quite a long time and plenty of things had to be done here all the time. Winters were a nightmare, cause there was no central heating in the house and I had to load three masonry stoves with coal. Then we used a coke oven until we installed a gas heating two or three years later. Apart from that, the house required repair works all the time. At the beginning, the roof was replaced. Then I had new external plastering done.

AP: One thing is sure: a house and particularly an old one needs lots of concern and care.

MC: When did you move to Podkowa, Ania?

AP: More than eight years ago. I made a quick decision, cause it’s not a problem for me to move to a new place. With Paweł it’s a different story, cause he’s very attached to this place.

MC: You’ve got an atelier in Milanówek. Do you paint at home in Podkowa? Or maybe you need to take a break from your home environment?

AP: I definitely need a break, so I work in my atelier. There’s a very good light there and I always paint in natural light. At home I sometimes paint in watercolors or prepare painting drafts – so-called cut-outs. Home is where I come up with my projects, painting series. Atelier is where I experiment and carry out some proven elements of design. Sometimes I get commissioned to paint something – e.g. a landscape or portrait. It’s something I really enjoy.  In some of those cases I stay at home painting.

WT: It happens that your paintings travel from your atelier to your house.

AP: Yes, they do. It’s mainly Paweł who selects and hangs them but I am also eager to see if they fit in the residential area and what kind of effect they bring.

WT: Is there a painting of Anna’s that you particularly like, Paweł? Have you received any of them as a gift?

PP: Yes, I like a lot of them. For instance a portrait in watercolors from the “Faces” series. Or an oil diptych painted eight years ago – an abstract in shades of grey, which, according to Ania, is a portrait of mine. She offered both of them to me as gifts. We don’t have a permanent exhibition of Ania’s works at home. We select them according to circumstances, season of the year etc. She has also given me a lot of drawings from a series called “The Mouse and the Cat under the same roof”. She paints them inspired by our discussions or by overheard conversations of other people. 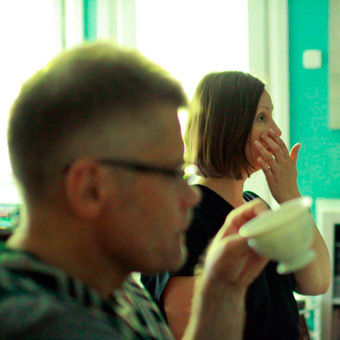 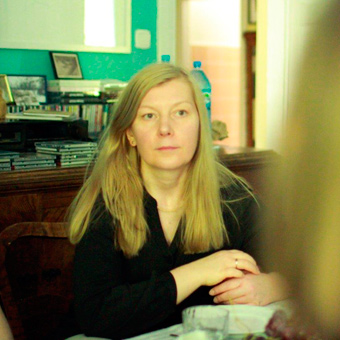 WT: What do you appreciate about art? What’s the most important about it?

PP: A kind of chillout vibes which make us see or hear amazing things. Lack of despotism, dialog with recipients.

MC: Did your families implant artistic interests in you?

PP: They definitely did. My grandma took me to the National Museum in Warsaw when I was a very young kid. She told me a lot about Chełmoński. When I got older, I started being critical about him and she felt a bit offended. Then I came to the conclusion that I was wrong. When I was a teenager, I came across a book about surrealism at home. It was a good beginning.

AP: When my maternal grandmother lived in pre-war Vilnius, she knew a lot of artists from the Academy. There’s a portrait of hers on a ceramic locket and a winter landscape from those times. My paternal grandfather – Wawelberg’s graduate – had a drawing board and a beautiful set of compasses. They’ve somehow inspired my work. Drawing and painting was the air I’ve been breathing since childhood, all the more so that I was the only child in the family. Then followed Debuffet’s exhibitions and “4 x Paris”, “Projekt” magazine…

MC: Are you both collectors of different things? It seems to me that your house is gathering more and more things in a natural way.

AP: We do not attempt to develop collections in a regular way. Apart from works of art, we gather various intriguing objects which often include souvenirs from our trips but also everyday objects. There are also books, loads of books… 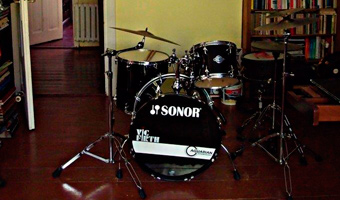 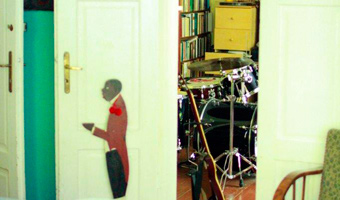 MC: If you were to list a few must-haves in your house, what would it be? 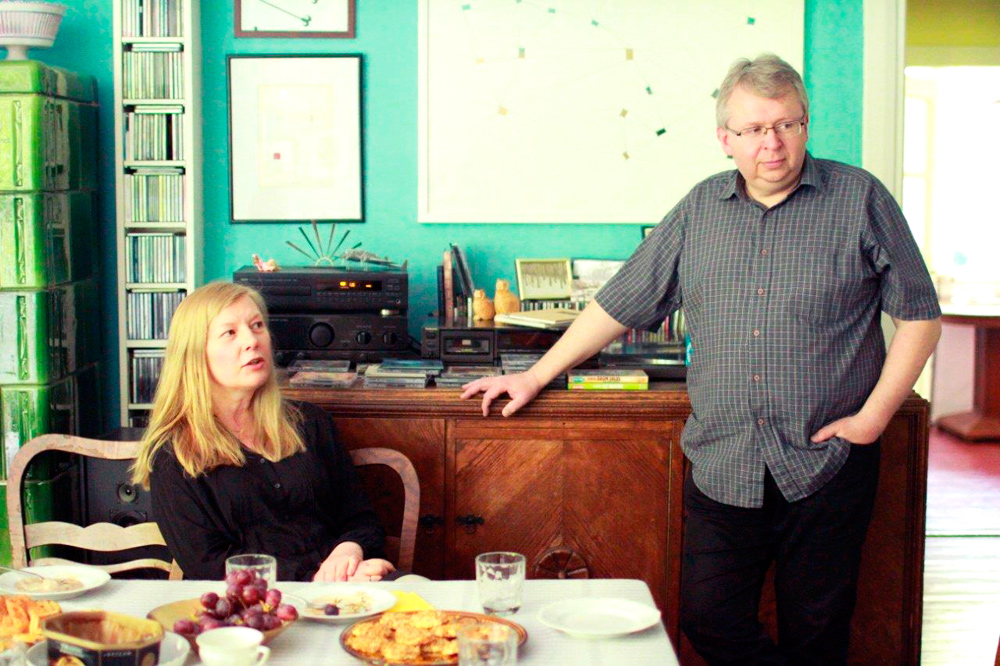 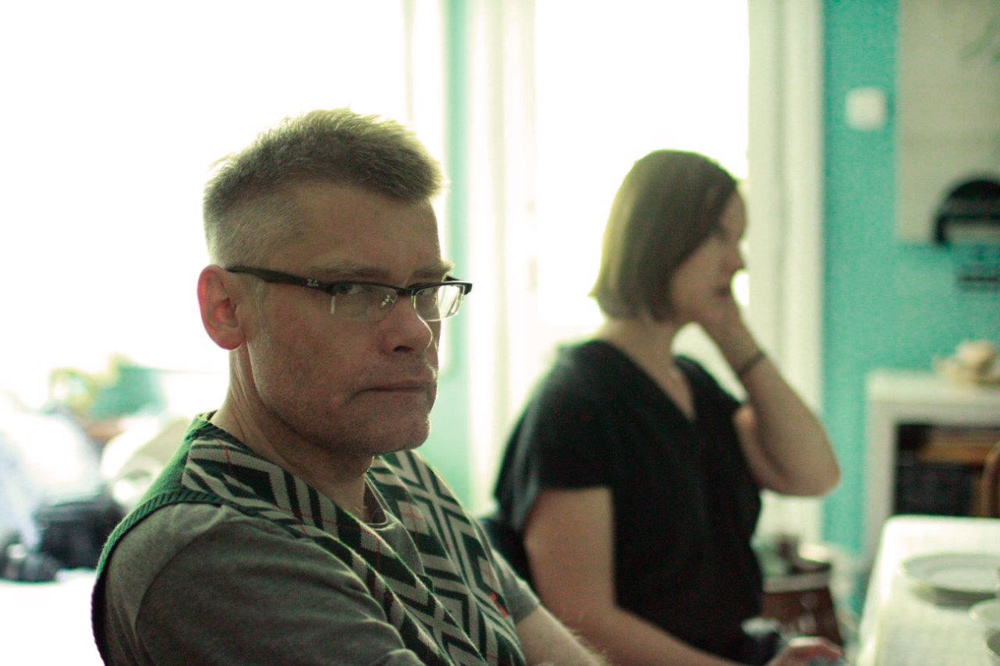 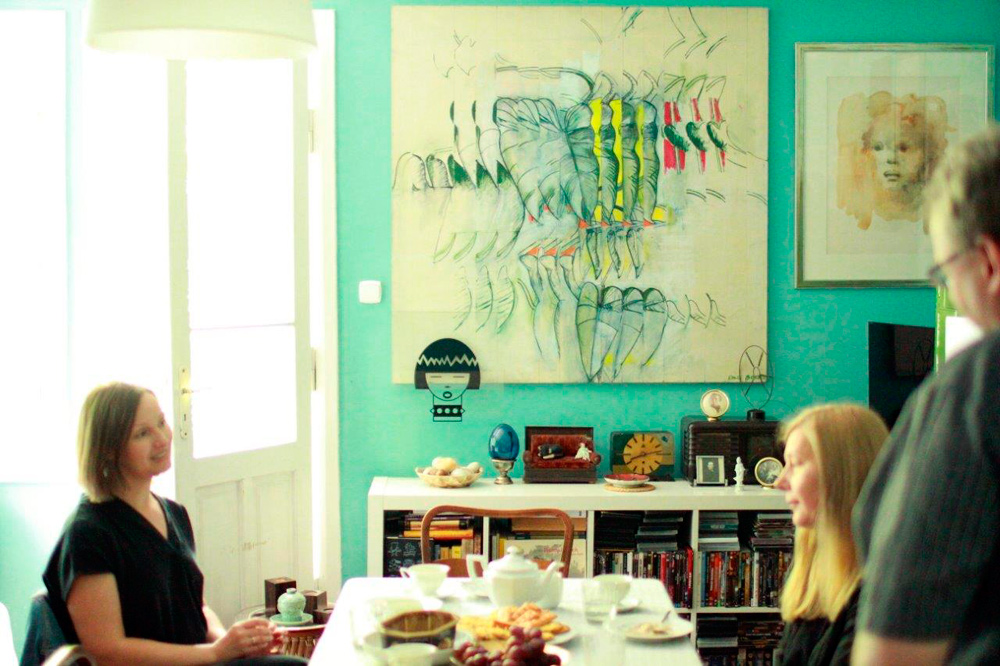 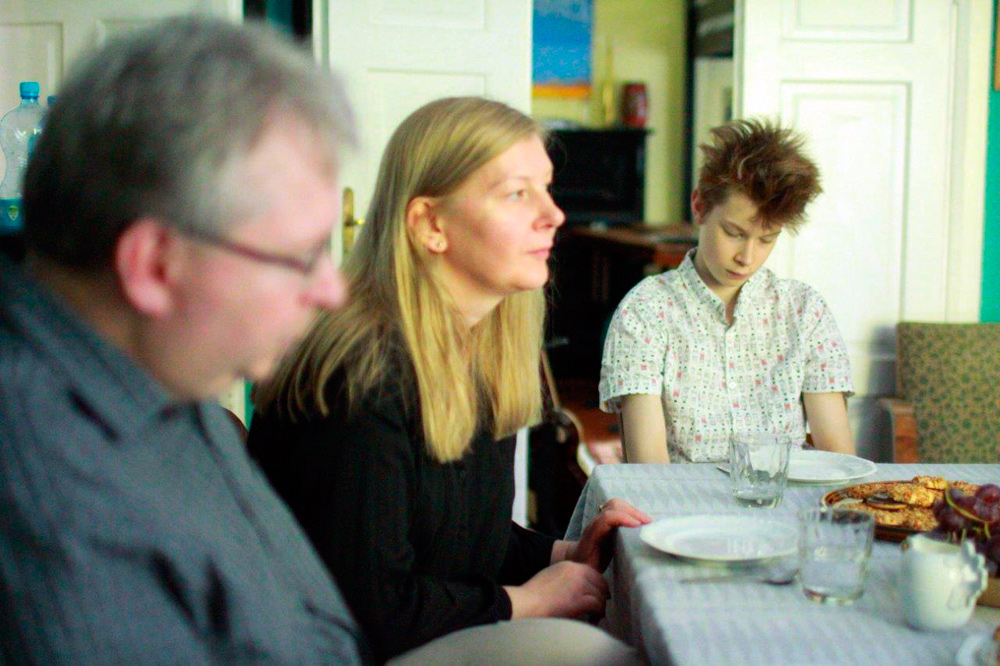 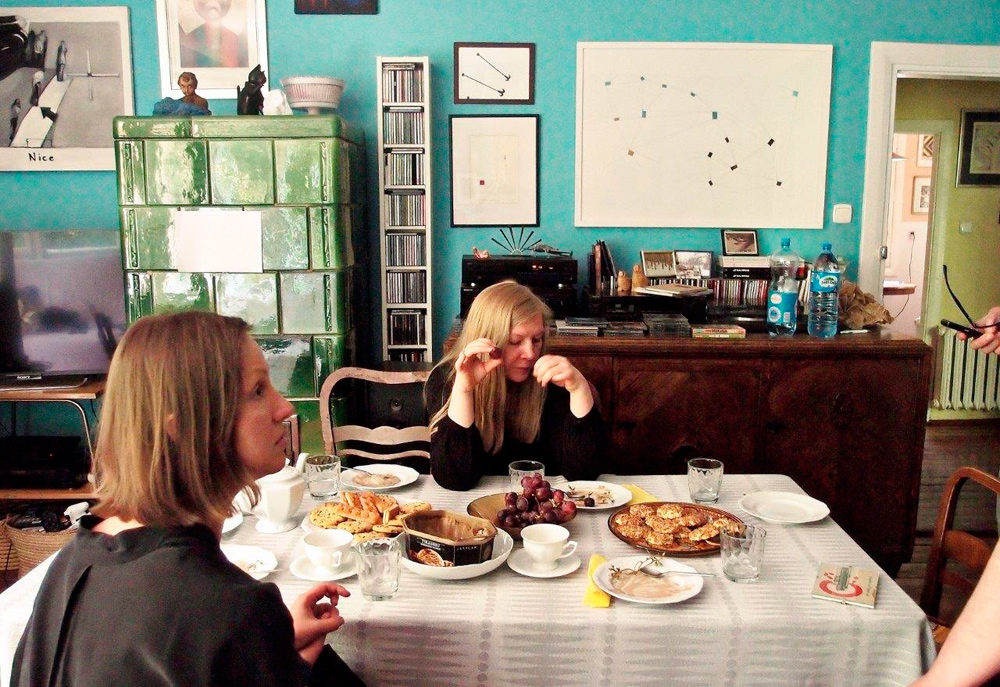 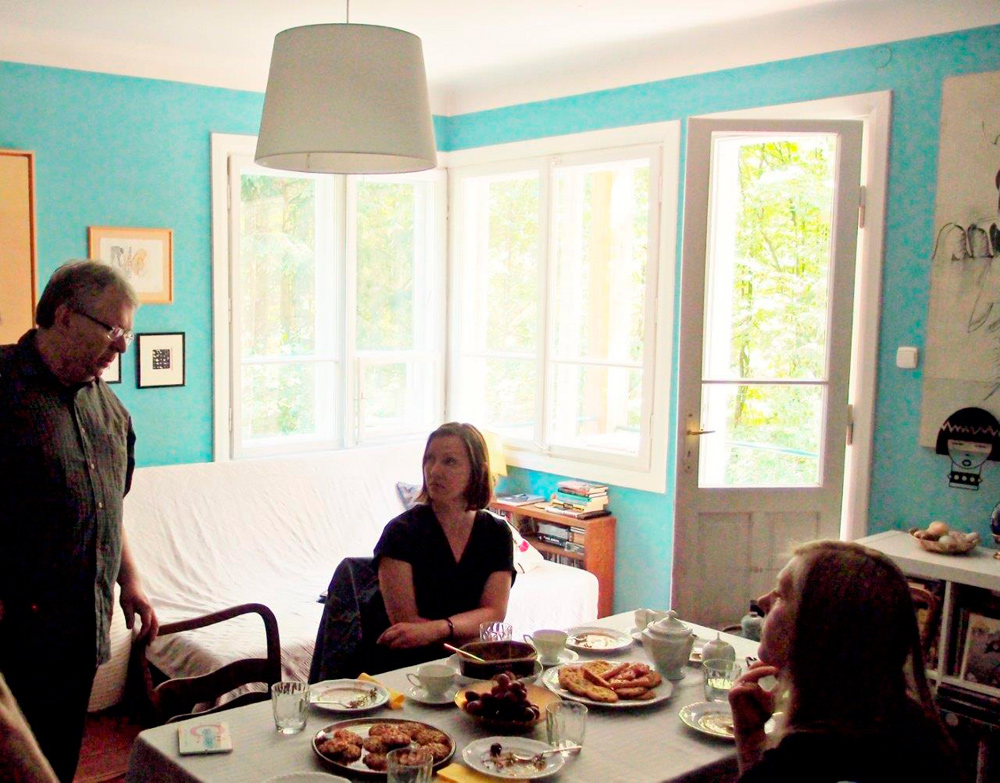 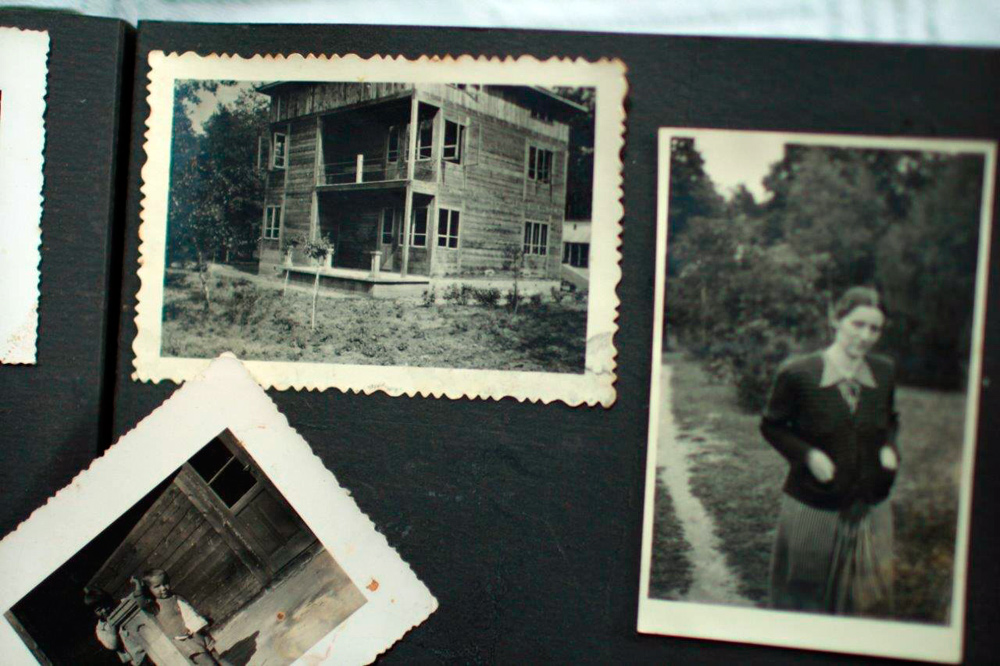 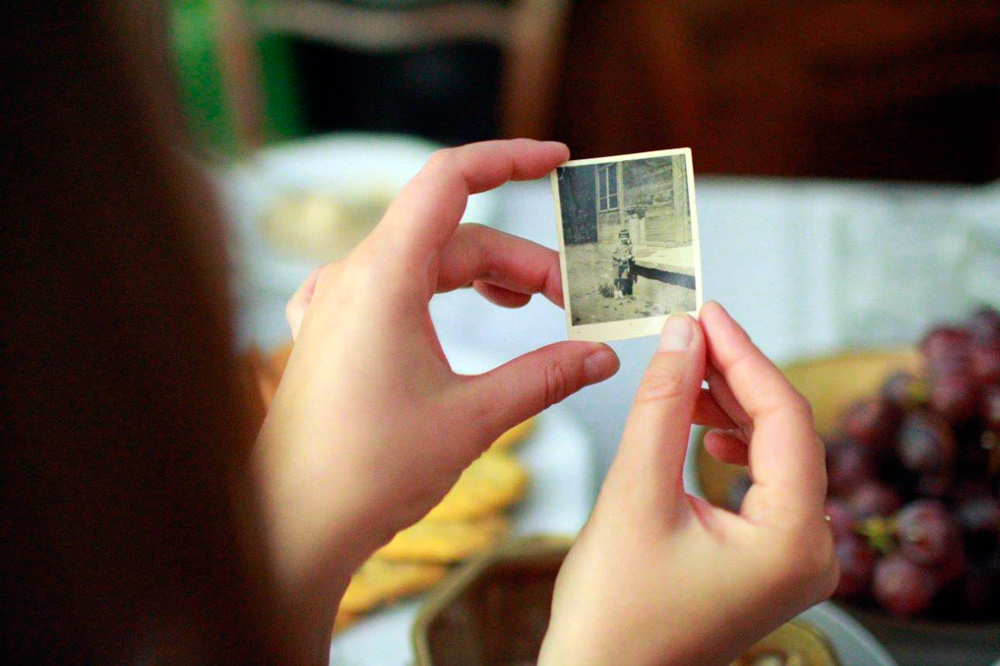 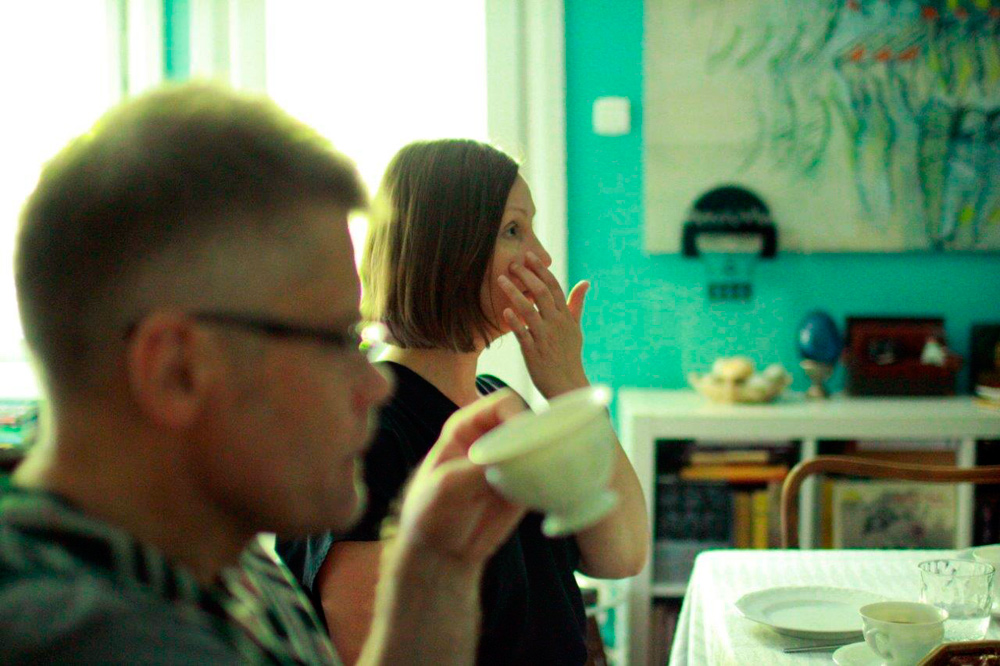 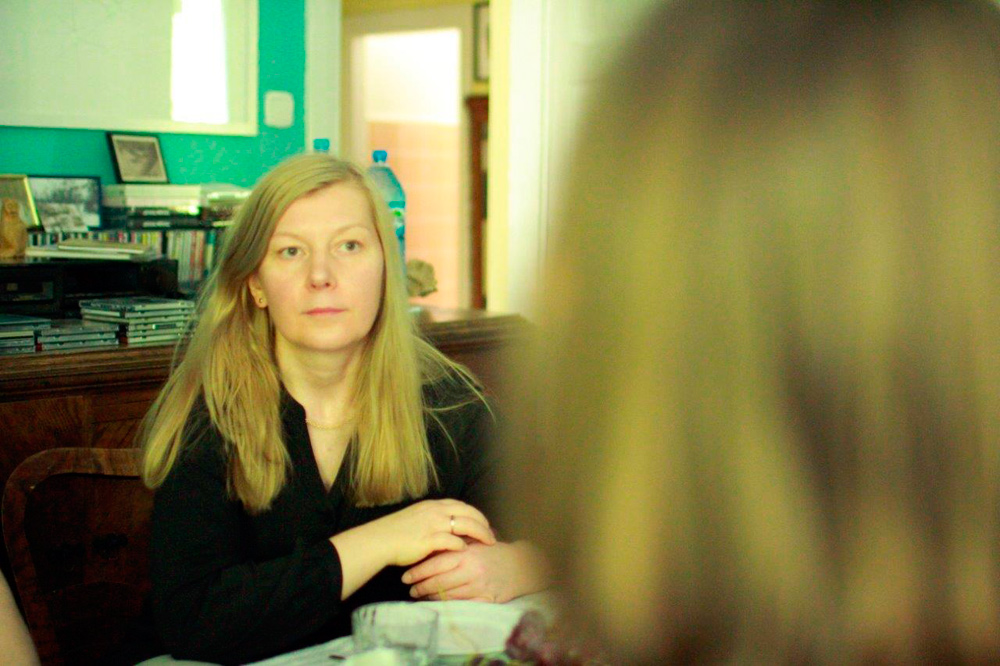 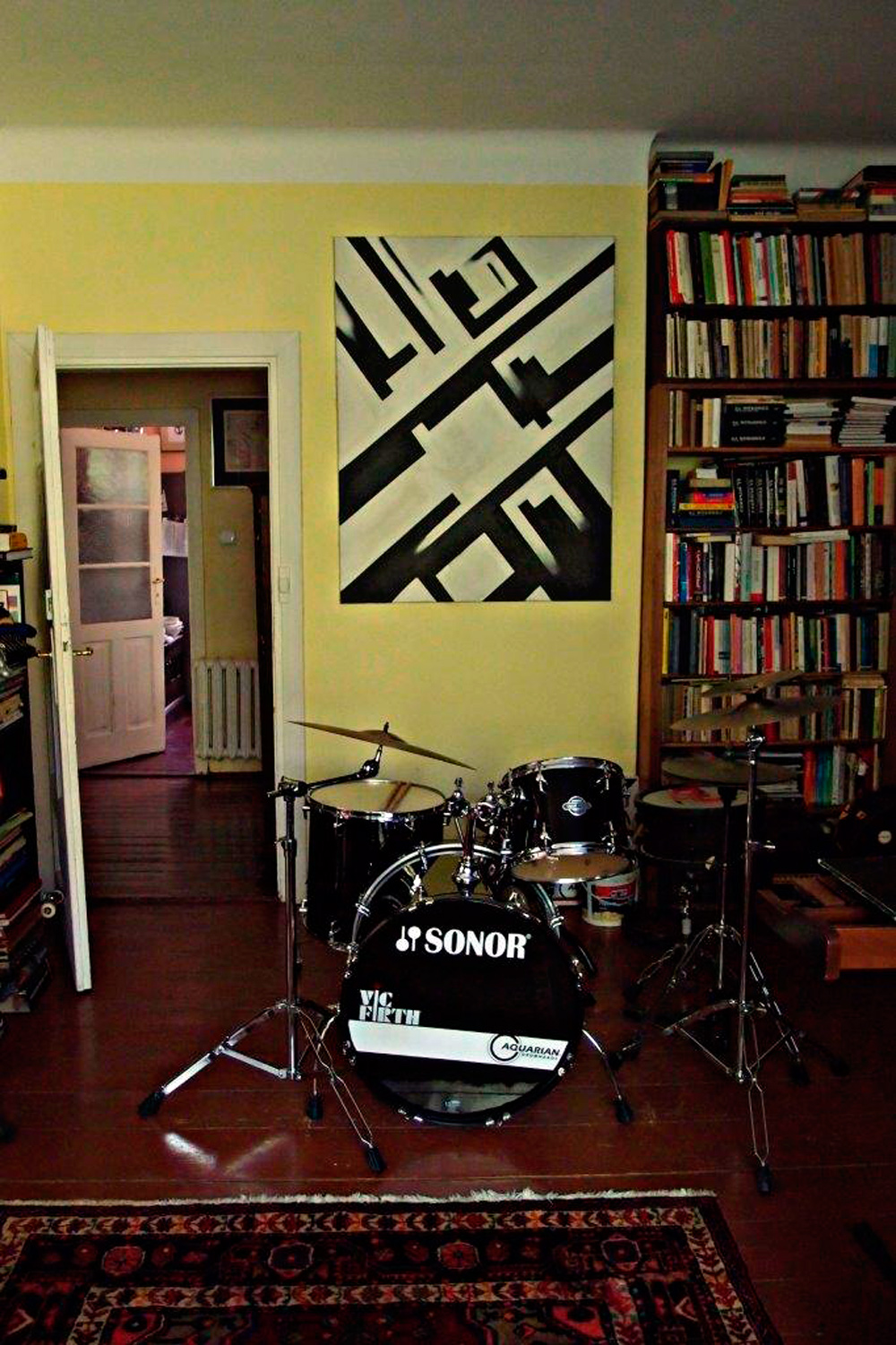 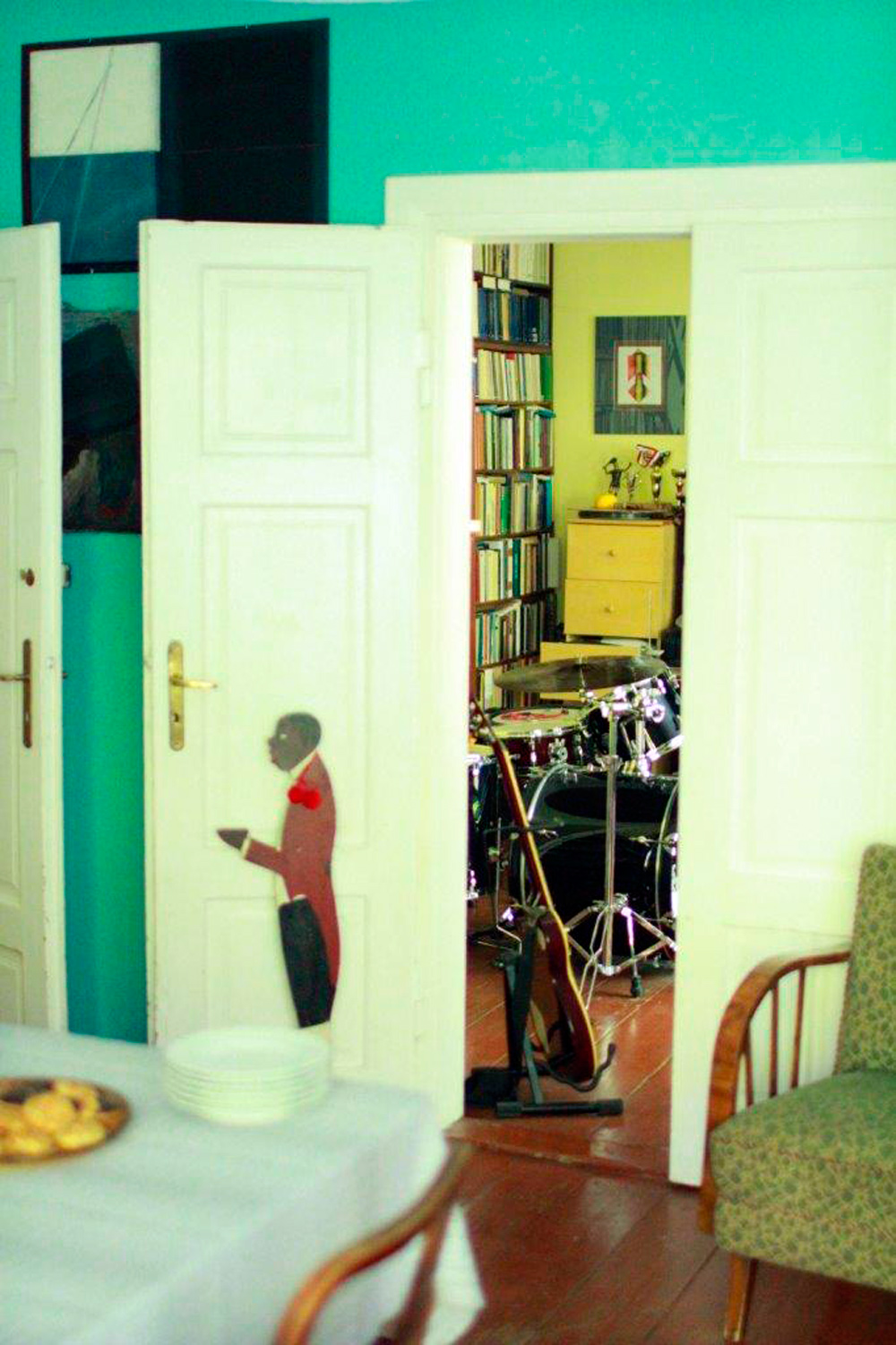