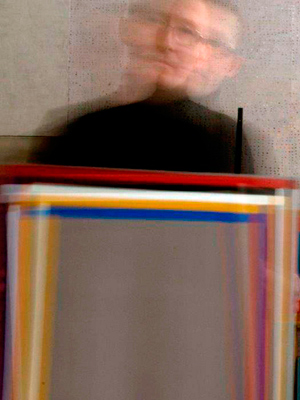 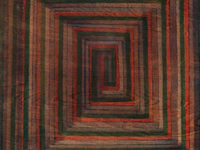 The labyrinth is a recurring theme in Łukasz Majcherowicz’s art. With each painting the artist ventures deeper on the journey into his unconscious, down the byways of reality. He tries to understand himself and the world. He poses questions but offers no answers. He’s not the only one:

I care about one thing only: am I drawing closer? Circuitously, wandering here and there, now receding, now returning, but always with a clear aim. Drawing closer to what? To knowledge, although I know not of what kind, to a reckoning, to understanding, wrote Czesław Miłosz in the poetry collection Unattainable Earth.

In his influential essay The literature of Exhaustion the novelist John Barth said: A labyrinth, after all, is a place in which, ideally, all the possibilities of choice (of direction, in this case) are embodied and must be exhausted before one reaches the heart.

If one reaches the heart.

We wish to understand, to intuit the aim, to find it. And to generalise that individual path into a symbol of humanity’s journey. But we are in a labyrinth, and Ariadne’s thread is only a myth.

We could say that the motif of the labyrinth is as old as the hills, or at least as old as Minoan culture. Łukasz Majcherowicz knows that by painting labyrinths he enters into a profound dialogue with the history of civilization, of art, of philosophy.

In his modern, abstract paintings he touches the problems and existential fears of our times; but they have been experienced by whole generations before us.

A meander, a labyrinth, a point in the distance, at the edge of the world, at the edge of the painting. Standing in front of Łukasz Majcherowicz’s pictures we stand at the beginning of the road to understanding, to feeling, to discovery. It is feeling more than understanding; touching unrealised truths rather than reading them. The contemplation of a painting may turn into a journey into the depths of one’s unconscious. There is transcendence in these pictures, a power and exaltation similar to that in medieval icons or Buddhist mandalas.

It’s a maze, going in circles, searching, says Majcherowicz. — It’s a constant wandering, walking ahead. A path towards an aim. Sometimes only a path. Like life. Like painting.

Krzysztof Penderecki said of the two garden mazes he created in his park in Lusławice: To me they symbolise artistic exploration. You can’t always follow a straight path; sometimes you reach a wall and have to turn back.