Geometry for painting. Painting dabbling in geometry for fun. The world compiled with mathematical bricks is the fun.

Mathematics is our reality. It is ruled by one and only formula. To reach this formula means to break the chain of cause and effect, to swap day with night and night with day. Rectangles and squares are the continuous boring of the space. As if the will of cognition was breaking through to the other side of sight. Building up of with geometric solids is not helplessness but an attempt to return to the beginning. The clash of the real with the unreal. Using geometry is like casting a cartographic net over a void. This painting stems from the void and it aspires after the void – the quintessence of being. The void we follow every day. A Big Nothing that sometimes can be everything.

The void is the inner silence, a kind of contemplating stillness. One stems from the other but they are actually one. The infinite void and the void with bounds. Apeiron and peras.

And the second kind of a void is the exorbitant hierarchy called reality.

Two voids, one painting. Two voids, like black and white.

It is the painting ‘in view of’ the multiplicity that becomes chaos. Chaos degenerates. These paintings’ briefness is an open defense from the chaos. A mutiny – mature and thought through – against the accumulation of events and information. This mutiny is the knowledge, coping without knowledge.

The geometric figures are used to describe the world… we move along the length, width, height and it wouldn’t even cross one’s mind that there might be a passage somewhere to a completely different dimension.

These paintings are a language by the use of which the invisible world is trying to communicate with the visible one.

The geometric lines look like some secret maps on which, possibly, are roads to understanding, roads to the place where the mind becomes free and senses are cleansed. Such roads that lead to honest and profound feelings demonstrate that Descartes’ ratio is just an invented schematic to describe the world and a man. These geometric lines blur the borders between time and space. They hypnotize with their rhythm of regular sequences. They are like a continuous ostinato of colours.

The lines are taken out of context. Now only the viewer can give it to them.

The same motif appears again and again on the paintings. However, it undergoes transformations completing a full circle. A rectangle becomes a blue door. A rectangle minimized to a single line. What was first: the door or the line?

What do those quasi labyrinths, in which the artist makes the viewer walk, say?

A labyrinth as a metaphor of something that fools, beguiles and cons. A labyrinth and its deceitful clues. The ways always lead in a wrong direction; the passages always go the wrong way.

But the labyrinth is not outside - it is inside us. It is inside us where all the entanglements happen. How to detangle this net of deceitful routes of our feelings and emotions?

These paintings boil down the feelings and emotions to falling for The One. The feelings and emotions are suspended, placed in brackets (in concordance with Cartesian epoché). What is left when we suspend this entire emotional baggage? Does ‘I’ still exist in us? These paintings are trying to help us to identify our real ‘I’. These squares and rectangles are to bring out one’s own, intense, and real ‘I’.

Thanks to the reference to the labyrinth the painting becomes symbolic. It becomes a kind of a mandala, a record of meditation as well a call for it. A call for calming, stillness. A call to enter.

In Buddhism, a labyrinth represents an illusion; in ancient art it was a personification of danger while in European culture it is a perfect structure, just like Descartes’ ratio that imposes on us very rigid frameworks for reasoning which become a kind of prison for one’s imagination, spirituality and intuition. The artist may be using very brief and simple means of expression to make us realise that what is important remains inside, away from real and the rational. What is important can be found not in the complicated and loud but in simplicity and in silence. To bring the multiplicity down to one becomes the new thing.

Going through the world of Łukasz Majcherowicz’s paintings I found a door. A blue door. A door made of staggered rectangles. This multiplicity realizes itself in the last rectangle - the unfinished rectangle that seems to be a door. These rectangles are like the uncountable number of doors, moving farther and farther and each time there is another door, and one more, endlessly. There is some optimism in the blue colour of the last door: that we will make it to our destination; that in this unsure multiplicity there is a constant. That blue colour is like a full stop at the end of a last sentence. Is it a blue exit from the labyrinth? Or could it be an entrance?

The abstracts, even though non-figurative, are a narration. They are a record of the road, possibly a road to a different world where we could rid off the burden of matter and adopt the weightless lightness. A record of the road going towards silence.

Maybe this is why these paintings are flickering and are full of internal tension, and have many peaks.

The lines used by the painter do not restrict – on contrary – they open up. This is the paradox, just like the Escher’s paradoxes. What has a restricting shape brings freedom. What seems to be a prison is a freedom indeed. Or the opposite. What looks like a tower is an open space. The open space can be a tower. What seems to be the knowledge can be the lack of it. A lack of knowledge becomes the knowledge. This is how these paintings should be interpreted: as the face of something that does not exist but it IS indeed. 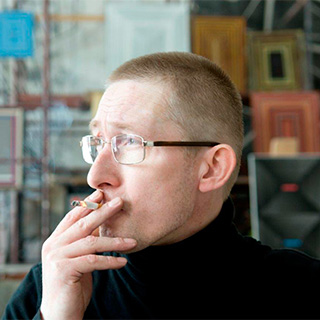 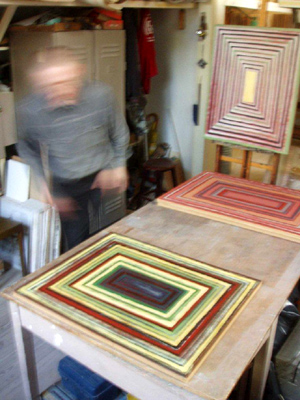