To see what it’s like to live together and paint separately for 23 years, to judge the state of affairs after 23 years, one should visit the exhibition of works by Bogna Gniazdowska and Mikołaj Kasprzyk in the Konduktorownia Gallery in Czestochowa. Both being faithful to themselves, the artists keep autonomy of their own art. 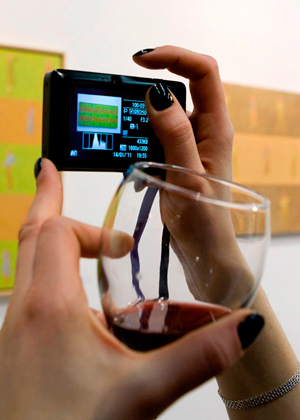 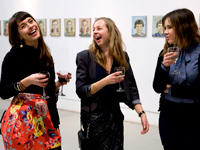 Under the cover of going to the past in the convention of a renaissance costume, he presents interpersonal relationships and the human form. In his paintings everything is thought-out, no wild shots. In his ‘Boustrophedon’ series he once again proves that there is method in the madness. He is reaching to the past again, and this time it means going back as far as antiquity. The typical lines on which he makes his character walk, jump, hop and halt are the boustrophedon. Originating from Ancient Greece, the term describes a type of bi-directional way of writing, where alternate lines are read in opposite directions and every other line of writing is flipped or reversed. The movement of the writer’s hand goes back and forth like an ox drawing a plough across a field. One thing, however, never changes – the woman in Mikołaj’s paintings is always his wife, Bogna.

She likes to refer to the family photo album, to her own childhood photos, to the surrounding objects that she portrays with the same level of empathy she does with people. ‘Formerly I really cared about finishing, making a painting, creating an object. Nowadays what seems to be more important is the act of painting itself, applying paints – one beside another – onto the canvas and observing the tension between hues and the emotions they evoke in myself. It’s as if I was having a kind of inner dialogue with my own clumsiness, laziness and inability. It’s also an attempt to capture what’s most important for me in the subject of the portrait – a person, an animal or an object – character, similarity and atmosphere. Painting as an activity is like auto-therapy – it helps me regain my composure and inner balance. Painting as a job disciplines you – it’s the order imposed upon yourself. And I stubbornly hold on to this completely impractical job even though doing it today borders on the miraculous. I am struggling because this is what I like doing most,’ says she.

Unfortunately, the vernissage of Bogna Gniazdowska and Mikołaj Kasprzyk’s exhibition took place without the main characters. She had to stay in Warsaw to look after the cats and although he did come to Częstochowa, instead of coming to the opening ceremony, he came down with flu. Jacek Łydżba did the honours and the audience without any embarrassment were able to follow 23 years of their married life.