Koza can be described using the slightly old-fashioned term of a truly renaissance artist for he is involved with several different types of art. From the entirely obvious such as painting to video, animated films, as well as poetry and comics. He is able to boast significant achievements in each of these areas and the list of exhibitions he has been a part of is long. His works had been seen, for example, at the Museum of Art in Lodz, the National Museum in Poznan, the Mozg (Brain) Club in Bydgoszcz (he’s on the list of people who have had a strong influence on the character of the club), as well as among the works of artists such as Edward Dwurnik, Stefan Gierowski, Jerzy Nowosielski, Roman Opalka, Leon Tarasewicz, and at the “Boundaries of Painting” exhibition at Warsaw’s CSW.

He is being called a star and a legend of the Wroclaw artistic avant-garde. Among its other members, one can count in Monika Grzesiewska, Elzbieta Janczak-Walaszek, Pawel Jarodzki, Antoni Wajda, and Krzysztof Walaszek – all artists associated with the Entropia Gallery. Janek Koza has held exhibitions with them all. Their first exhibition was dedicated to hairdressing (Frisier Wunder) and took place at Entropia in 2000. At this exhibition, Koza showcased his versions of hair care implements (mousse, dyes) manufactured by renowned cosmetics companies made of cardboard and painted with crayons. The group’s next exhibition at the Arsenal in Wroclaw was titled “Fun Gun” but it was closed amidst a scandal before it even had a chance to fully open.

Everyone knows that, for an artist and for works of art, there is no better form of publicity than condemnation. With this in mind, Jan Koza’s works and those of other Wroclawian creators were ever more enthusiastically being shown in many corners of Poland: at the BWA of Zielona Gora, at the “Europe Non-Stop” exhibition dedicated to the economic and political situation in Europe, and at the Manhattan in Lodz where “Paintings That Heal” were presented. At this exhibition, Janek Koza presented scenes from the Polish healthcare system, among others “The Bribe” and “Nurses’ Strike” made of matches and chestnuts. In Ustka, he exhibited his work “Art With a Capital G”. This same title bore Koza’s article which summarized the group’s artistic activities published in the online journal “Latarnik”.

Besides painting, Koza also works with the art of video. His films have been shown at previews throughout the world – Russia, Germany, Great Britain, Brasil, Japan, Holland, Czech Republic, Ukraine, and Austria (Review’s title – From monument to market. Public space in Polish video art; at the Kunsthalle in Vienna.).

Everything was drawn with a stylishly „ugly” line, carelessly, without taking into account principles of perspective or proportion. Or, the way that Koza has been drawing for years (for example, in the “Erotic Lyrics” series of three years earlier). The animation was done in a similar manner and did not in any way resemble the chiseled films made by Disney. The illusion of motion by the principal characters was accomplished by the muddling of two drawings representing two characters in two different poses. By consciously applying this sort of style and an absurd sense of humor, Koza has managed to effectively mock programs such as “Forgive Me”, “Talks in Progress”, and “All you need is love” before these programs made an appearance on our television screens. Mocking in itself is really a simple thing.

Koza is a master in portraying the ugliness of the human body. He accomplishes this using a careless, broken line and by applying “dirt” to finished drawings. The secret, however, is first and foremost tied to disproportional, dwarfed, or overgrown physiognomy. This includes details such as hair on legs, under the arms, and in the groin area. Also, wrinkles, folds of fat, and bare gums. Koza does not, however, attempt to suggest that physical ugliness implies an ugliness of the soul. His heroes are sometimes cruel, sometimes kind, sometimes loving, sometimes unfaithful, sometimes romantic, and sometimes horribly cynical. Simply humanly imperfect. Certainly this cannot be said of the girls in Playboy spreads.

Koza’s other cartoons are no different. In the print version of “Vacuum” from the “Arena Cartoon” (another story well-known from an animated film), we see preparations and the start of a Polish space mission whose success is threatened by a certain small error. In the tale, “Sailor Moon in Warsaw”, taken from the “Manngha in Polish” anthology, we meet a hard-working, petite Asian woman (varicose veins on her legs) selling Chinese food. According to Koza, an equally dull and sad life is that of Captain Zbik. In “Fresh Tracks” (The “What now, Captain?” collection), he is no hero pursuing bad guys but an aging man with a big belly who searches for lost dogs and seduces the aging women who own them.

Janek Koza draws cartoons for the sake of pleasure and earns a living by working at an ad agency. And his real name is not Janek Koza. It’s only a pseudonym – one that is as familiar and ordinary as his stories. 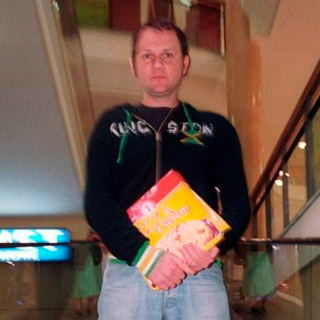 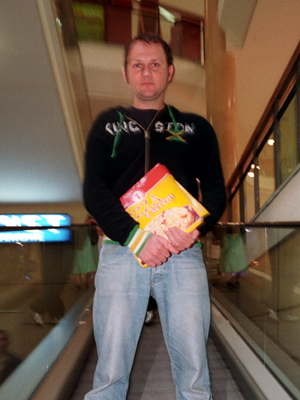