A mobile network tower ruins the view from the window. They installed it here – in the middle of nowhere – not long ago. It’s ugly, but half of Łódź has got a better signal now. 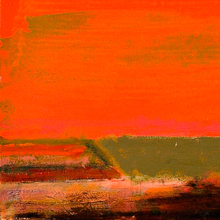 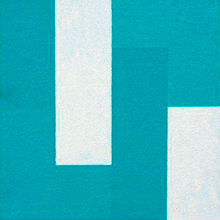 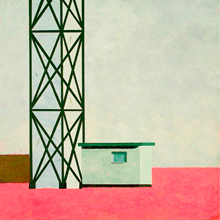 It ruins the landscape, but looks really cool in the paintings – a light, delicate geometrical structure. There’s a kiosk next to it – a little concrete block. It’s a landscape, but when turned upside down, it becomes a still life.

He was born and spent his childhood here. His parents moved when he was five. The family had been living in that old, wooden house for generations. After a longer stay in the Netherlands, he came back seven years ago, by which time the house had been abandoned. He changed the tie-beams, the roof, the windows and the floors. Living out in the sticks has got its good and bad sides.

The process of artistic creation may be approached in two different ways. One can either grind stones or cook, remove one layer after another. One may be glad that there are fewer and fewer, or add them, mix, stir and taste. The “cooking” way is more like him. A painting must be “well flavoured”. 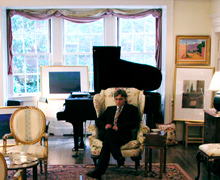 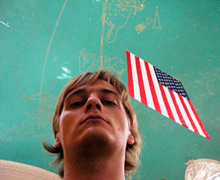 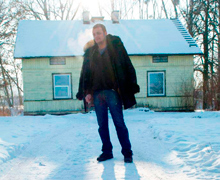 Choosing between abstraction and figuration makes no sense. He doesn’t divide his work into periods, doesn’t name them – they are parallel ways.

- I begin with what I have, with what’s close at hand. But sometimes you just want to try something different.

From the bed in his bedroom you can see the atelier and the paintings there. Some need three hours and some three months. It’s just a job, but it’s the job – usually from early morning, nice and easy, no brainstorming, no dilemmas or dramatic scenes. It may even be a kind of meditation, since painting is relaxing and puts you in a pleasant trance. Boredom seems to be the biggest problem, because this job is all about sitting alone. Being honest with yourself is most vital. It’s enough to decide about your own life: just like with painting – you can make mistakes, but make sure these are your mistakes. Although...

- Painting is like life – sometimes you find a mare’s nest: very often it’s an uphill battle – and you need to get drunk with the painting, soldier on until the small hours.

Walking around the house does the trick. The hall, kitchen, atelier, bedroom, bathroom and the hall again. All passage rooms – so many motifs on the way. A bathtub in the middle of a huge bathroom – and a woman in the picture standing with her back to us. She may be waiting for the bathtub to get filled with water or for a man. Or maybe it’s the man who’s waiting for her. Paintings with armchairs. One thin-legged armchair with wooden backrests, the one from the 50’s, is really standing here, but the other one – huge and geometrical – is absolutely fictitious, although in the paintings it repetitiously comes back in different configurations.

The worst thing is that there is no river in Łódź, and a city without one lacks that beauty or energy. Whenever he longs for Warsaw it’s always the river he misses the most. Mysterious light in some paintings, glowing just like the memory of night fires on the beach of Saska Kępa. Or maybe not, maybe it’s not the source of inspiration – one can only multiply interpretations. There will be no answer anyway.  Over and over again he refers back to Herbert and his Still life with a bridle – there are those who ask and those who know the answer.

- Each painting is a question. It’s also what life is about – to ask questions, especially the fundamental ones like „why”?