I have decided to show Przemek Truściński’s commercial storyboards (panels of rough sketches outlining the scene sequence), as it is the latest art form and a documentary of a Polish dream of prosperity.

In advertising, the storyboards are a single-use product – Przemek says that after a wrap they are just binned. And I believe that in a commercial mishmash of the advertisement production Przemek’s drawings ARE the original thing.

Everything else is the result of market and focus groups research. In the ruthless marketing machine the drawings of the individual takes, as done by Truściński, retain individual features. The author must indeed conform to the demands of the production, advertising agency and the client: the surreality of Rama margarine, Skoda cars or Knorr soups is ideal, colourful, cheerful, full of slim smiling girls and James Bond-like handsome men.

However, within the imposed convention, Truściński musters his own styles: he creates the characters as if it was a masterpiece comic book. He never uses storyboard drawing software; he skillfully draws everything himself in a traditional way.

And maybe as a result it seems that a bosomy girl from Skoda commercial looks with a bit of melancholy, a policeman’s gesture stopping the traffic seems breathtaking and a conversation between people having a ‘Cuppa’ soup has dynamics of a film shot. These are too good for a storyboard and the thought of those striking masterpieces ending up in a bin breaks my heart.

Besides, what an amazing documentary of the consumer paradise of a year 2006 it is! When I hung Truściński’s storyboards like panels on the gallery’s pillar I thought they looked like some priceless paintings from Egyptian pyramids. Just like those, they depict customs, processions and rites. Egyptian painters devoted them to the then ideology of the forever life; Truściński records the contemporary ideology, which glorifies the pleasure coming from satisfaction. He is an iconographer of temporality. 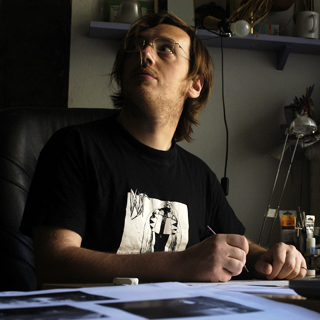 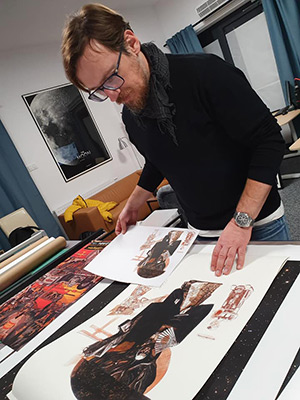