Our bodies, our lives

What might happen if a young girl decides to write down what’s important for her? And what if those things mainly include sex and her own naked body? When painting, I’m getting even with my corporality, I want to look closer at myself, says Agnieszka Sandomierz. Is there anyone else actually willing to take a look at her intimacy? Welcome, you voyeurs in the sexual world of a girl of the verge of 21st century.

The forum is boiling. The internauts are outraged. You’d better apply yourself a treatment, woman, write some. Others, in contrast to those, are delighted, and believe that Agnieszki Sandomierz’s painting is the best work of those appearing in the Painting of the Year contest. One thing is certain, though: the number of entries underneath the picture outnumbers the posts placed under many other paintings. 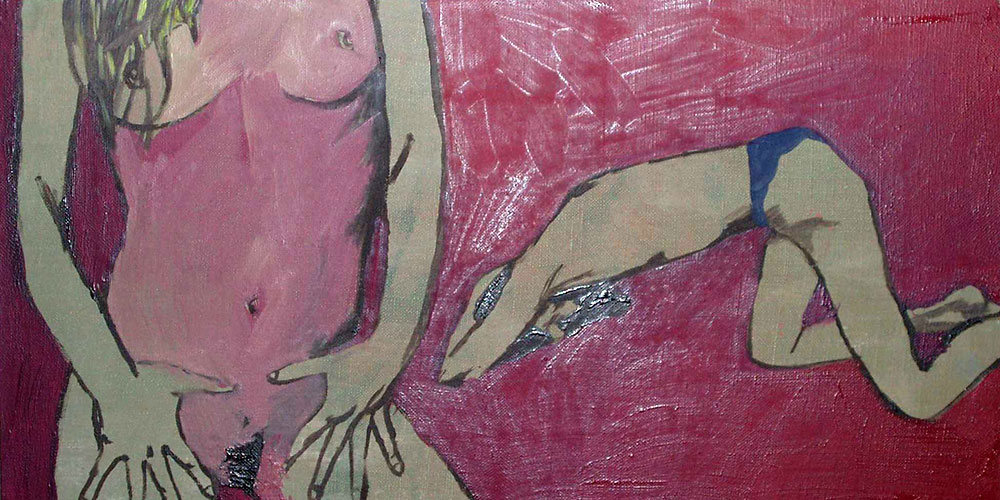 I’m fed up with looking at naked women, Nil wrote. This was good in the nineties, as Poland was opening to the west and such things were giving people a kick.

An apt statement, that, in one aspect: since the early 1990s, owing to the political, social, and cultural changes that Poland was being through, the body, or flesh, settled down for good as an art topic. Most frequently omitted or neglected by that far, as a little important area, it has [ever since] become an important area of exploration for artists, art historians and critics, if not one of the main research categories, Agata Jakubowska wrote in her book Na marginesach lustra: ciało kobiece w pracach polskich artystek [On the margins of a mirror: The female body in works of Polish female artists]. A woman tends to get defined in a relation to body. Intimate themes connected with physicality are then taken up by female artists in order to look for ways of thinking of femininity being different from the male ones. Such artists, Agnieszka Sandomierz included, tell stories of themselves, doing it through unveiling what has so far been a puzzle, a secret, or indeed a taboo.

Someone said, I’m balancing on a borderline of physical exhibitionism, Agnieszka says. And he or she was right at that. 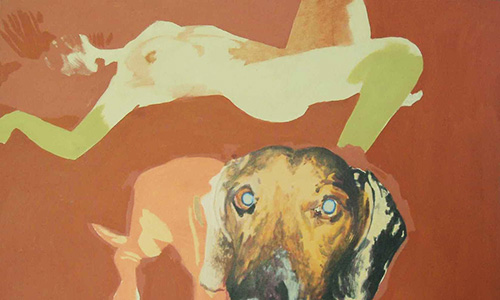 These are but three out of the several intimate scenes painted by Agnieszka Sandomierz.

Private memoirs is a sign of the time. A grand scandal and dazzling success were shared by Natacha Merritt, a twenty-one-year-old American who had published her photos on the Web and them published them again in the form of an album, titled Digital Diaries (Taschen). She would use a digital camera to document, taking pictures at arm’s length, her intercourses with men, masturbations, allowing others to look closer at her body with its most intimate areas.

Anna Nizio has embroidered the penises of all guys she’d slept with. Anna Niesterowicz displayed a video featuring herself having sex with a man, up to the moment when her nose gets bleeding. Agata Bogacka has made paintings in which her lovers appear. In her Seria [Series] of 2001 she lays naked and prostrated on the ground, as if she were killed; and there are three naked males around her body. 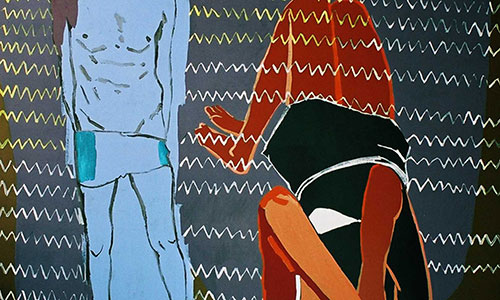 The British artist Tracy Emin has submitted for the Turner Prize a tumbled bed with condoms, toys, stockings and the like scattered all around. Another of her works was also a scandal: Everyone I have Ever Slept With was a tent on whose walls she had embroidered the names in full of all those she’s ever had an intercourse with.

The female body and its sexuality has become an en-vougue and topical theme. An important one, too.

Why should we be peeing on anyone’s private life? Looking at the paintings by Agnieszka Sandomierz, I can answer this question by saying: out of curiosity, and empathy too. Curiosity, because the willingness to peep is an imminent part of the viewer’s nature. Agnieszka’s works do provide you with an excellent satisfaction of your need to peep: it’s like I’d be peeping through a keyhole on one’s life, could see a fragment of my next-door-neighbour’s everyday life, be it the detail we would most eagerly hide against anyone else’s ability to see.

Empathy, for whilst looking at the scenes she paints I’m getting an impression that, yes, I’ve been through all that, several times. The complex human relations, the loneliness of two individuals when they stay together, missing someone, the two bodies attracting each other or merely disliking one another.

Agnieszka Sandomierz’s paintings are somehow universal, and in a most perfect manner so, despite all their intimacy. They may move you or appal you– but they will always concern the viewer directly. 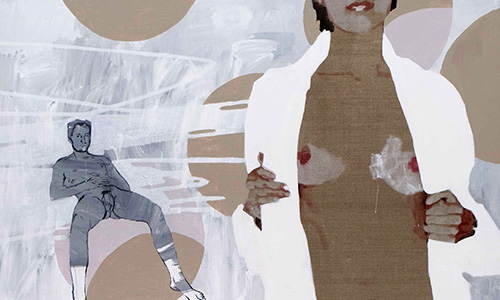 Don’t you cast a vote for them, if they’re not going to pursue your rights. Don’t you sleep with them or share your bread with them, if they don’t appreciate our freedom, our right to decide about our own lives and bodies too. I am not a post-feminist feminist; I am a Third Wave, wrote Rebecca Walker (in 1992), daughter of Alice Walker, one of the leading personages of the Black Feminism movement of 1970s/1980s, the author of the famous novel The Color Purple, among others.

Agnieszka Sandomierz’ differ somewhat quite essentially from the manner in which her predecessors showed corporality. A statement may be risked that this would boil down to a similar difference which could be drawn between the second-wave and the third-wave feminism. The artists of the seventies’ decade (in Poland, also some representatives of the critical art of 1990s) set for themselves as the main goal to feature the female body ‘otherwise’ than the patriarchal visual culture would have it. As Agata Jakubowska writes, they were showing a ‘real’ body. Real, that is, not having been turned into an erotic object, culturally unprocessed, merely natural. They were thus showing things which had never happened before as regards approaching the femininity, expressing interest in the corporal biology, or physiology. They were willing to transgress the then-binding image of femininity.

But Agnieszka Sandomierz, to my mind, is not interested in fighting for a ‘novel’ image of woman. Yet, what she is interested in is freedom, as mentioned by Rebecca Walker. She is like those third-wave feminists, accepting the achievements of feminism, treating them as something obvious, a thing no more to fight for, and, unrestrainedly moving across the space that her predecessors have won. Interestingly, Agnieszka Sandomierz’s early works (e.g. her diploma work prepared under Professor Szamborski) were closer to the second-wave feminist art: they showed the female body fragmented, covered with secretions. Those pictures were annoying. In her new paintings, however, we can look at the body with pleasure. These images are not intended to disturb. They appear to be even pleasant, or decorative, you could say. That they are attractive, is not a bad thing, is it?, the author asks. “Everyone likes to surround themselves with beautiful things.” The most interesting question now seems to be: where will Agnieszka Sandomierz go now? How will our bodies change, and their imaging too, as they grow older and older?

In 2001, the pop star Madonna, on handing in the Turner Prize to Martin Creed, backed with £20,000 in cash for a work based on lights being turned on/off every five seconds, said that art has nothing in common with money but it shares everything it can with love. When interviewed, Martin Creed himself said that he has made all those works as he wanted to be loved.

Is it an abuse on my part if I’d say that, it seems to me, Agnieszka Sandomierz’s works also have everything in common wit love, and it is from the need for love that they’ve ever appeared? The artist herself admits she wants to record moments of import in her life. The most important ones that she selects are corporal intercourses and lonely bodies longing for other bodies. 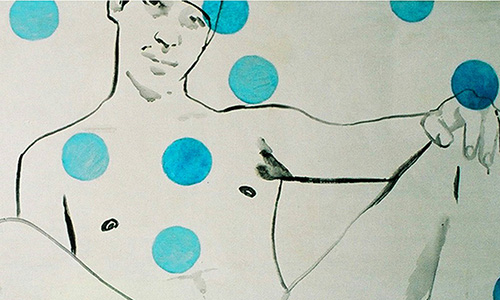 Is this any astonishing that a girl of today is not interested in recording historical events, political games, or, criticising the world of corporations? Moving politics aside is meaningful in the works of Ms. Sandomierz, as is in those of many other male or female artists who consciously tend to focus on small pieces of narrative, private stories – ones where it is easier to find true emotionality. When grand stories or histories disgrace themselves one by one, you can trust but what is closest, or most intimate, to you.

Second-wave feminists would say that anything is political; after all, bodies should be recognised as an area of meaning where the biological and the social/political tend to intersect. This, however, seems no more true to me. Particularly as regards Agnieszki Sandomierz’s paintings. The bodies she paints are not political indeed, nor even intending to become such. If read in this way, then it results rather from a misunderstanding, the all-ruling pseudo-morality, the ‘only right’ ideology which is ashamed of nakedness and bans revealing anything intimate. But Agnieszka Sandomierz approaches the body unarmed with an ideology. She’s innocent at that.

Last year saw the appearance in the Polish market of the legendary book Our bodies, our lives. It is very telling that the book has appeared there right now (i.e. thirty years after the first edition which coincided with the feminism’s second wave in the US), as interest in the body increases in arts.

Our bodies, our lives is a guide to the female body, health, sexuality, adolescence processes, climacterium/menopause, getting older; pregnancy and maternity. First published in the States in 1970, it was recently acclaimed as the most influential book of the last twenty-five years. It is unique and differs from any earlier such guides in that it was written by women and for women. Its intimate, almost memoirist’s, character is emphasised by the hundreds of emotional and very intimate letters from ordinary women. The first edition was titled Women and Their Bodies. Before the second was forthcoming, one of the she-authors got enlightened: This is not about some women and their bodies; this is us ourselves, and our bodies.

Just like in Agnieszka Sandomierz’s paintings, let me repeat: all this is about is ourselves, and our bodies.