I listen to everything, anything… 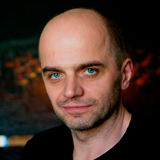 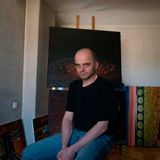 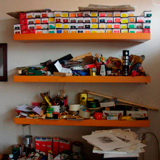 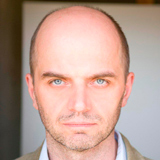 You do not seem to travel too much and yet your paintings look as if you were a real globetrotter. So what is it like then?

You are right. I do travel very little and I may be a home bird, but I do have enough imagination to paint scenes from other countries and fictitious lands. My works are bought by people from Israel or Australia, who believe I have been to all those places. But I spend most of my time in Częstochowa, in my atelier apartment... Travelling is way too much hassle for me.

I liked Paris very much and would have liked to stay there longer. It was summer. Warm and sunny, you know. I went to concerts and did some pub-crawling. I stayed in a very relaxing neighbourhood. But it was only that one time. Maybe I am too fussy and only some places appeal to me.

So, even though you spent some time in Paris, there is no trace of this in your paintings whatsoever. And yet you do paint places you have never been to...

I have no idea how to explain that. I think that, at the moment, New York’s got into my head, or – to put it more generally – the architecture of American cities. I do like it a lot although I am not quite sure it would really knock me off my feet if I actually went to New York to see it... But when I look at those thousands of windows, fire staircases... Well, it’s perplexing, but truly fascinating.

And that New York of yours, is it the one from posters and films? From action movies and detective dramas?

Maybe New York is just a pretext. For 15 years I have been painting windows and doors in different configurations. All the time since my fifth year in the Arts Academy, since my M.A. thesis.

Where does that obsession come from then? Did you enjoy spying others though their windows?

No, no. It’s a story so old that I do not remember how it started. Windows and doors are a motif you can repeat and exploit forever, both in flat and dimensional works. Outdoors on the one side and indoors on the other. You enter or exit. That’s a very bulky theme that has been used by numerous painters, so I believe that gives me the right to continue it.

In Renaissance paintings, and also later, a window has always been a symbol of openness to the world, and when we look through the window inside, there is always something to peep at.

That is exactly what it’s all about. I can look at the world with the eyes of two different people – someone spying and someone being spied.

But the windows in your paintings are usually shut...

Well, some of them happen to be open.

What is painting for you?

A great adventure, a challenge, a task to complete. And a difficult one. I consider myself to be a craftsman whose duty is to do a good job, to manufacture a good quality product.

The way you paint reveals how seriously you treat what you do and how important it is to you.

That’s just me. If I do something, I have to do it right. And it doesn’t matter what the thing is. I do not perceive it in terms of a mission. It’s just a job, but I do want to do it the best way I can and fully use all my skills. Obviously, the evaluation of my work is not in my hands.

Your favourite theme is panoramas of existing and fictional cities. The thing is, however, that normally most cities are inhabited while yours are completely deserted. Only an occasional ghost tram and nothing else... Maybe you just cannot paint people?

I believe I could, but I just happen not to. One day I might conquer my nature and start painting people, but you cannot be successful doing something against your own will.

Or maybe you just want to be mysterious?

No, not really. It’s not my intention. I do not paint deliberately to be perceived as a mysterious figure. If that’s what happens, it’s only by people’s judgement. I concentrate on painting, literally and figuratively. I am more interested in light, composition, structure and texture of paint, transitions between its thick and thin layers. The plot of my paintings is really outside them. The dominating light becomes a narrator. It deconstructs the painting, highlights and reflects objects that are actually not in the painting per se. I find my paintings conceptual. I know I may sound strange saying this, but I once planned to organise an exhibition in a basement... with the lights off. Everyone would know that there would be some paintings there, but just think of that suspense. Tension, just being there; atmosphere is very important, if not vital.

So the light proves the presence of man? Or God? Or is it something else?

It’s beyond me to explain it. I just can’t.

They only differ in composition. In my panoramas it’s architecture and buildings that make a painting. My landscapes are furnished with fields, beaches or the sea. And painting sunsets is an ever-present challenge for me. One day I would also like to paint a deer, but so far I have been tormenting myself with sunsets. It’s a complex subject and I believe one can really have a good time doing that.

Do your windows face west?

So why sunsets, not sunrises?

Subconsciously I yearn for sunsets with their pinkish sky and sea. It’s a synonym of the greatest kitsch. Lately I have been painting a piece of sky for approximately six months. Just a bridge, a river and a sunset and yet I cannot complete it. It’s a matter of talent I guess…

You have a problem with talent?

Unfortunately, I do. I think of more and more stupid and difficult things to do.

Nowosielski – everything by him, some of Lebenstein’s works (from the 60’s), American painters from the 50’s – Pollock, Rothko. Yves Klein. Naturally, the classics are most important – Rembrandt, Caravaggio, Velázquez, El Greco. Older art is probably most important to me. Out of my contemporaries I could also name Francis Bacon. And maybe a few less known Dutch painters.

Well, none of the above influenced your work directly.

It would be quite difficult to paint like Rembrandt since no one does it this way any more. People lack such painting skills these days. Any attempt to go back to classical style results in total misunderstanding or mannerism. You cannot just superficially copy patterns without a profound deepening of the content. When I saw El Greco’s Laocoon in Kraków (on a painting exchange programme), I was transfixed by its scale. Initially I had thought it was huge, but it turned out to be quite small. For me it’s a modern painting, anatomy of white and its tones. If I were smarter, I would have given up painting. Contemporary painters leave me cold and I know nothing about installations.

And de Chirico is not a point of reference for you?

No. Naturally, in a somewhat unconscious way I do copy certain elements, but I do not think of him and he’s not a model for me. Absolutely not. Rembrandt and the portraits he painted in his mature age – this is a real pattern to follow, which – unfortunately – is very hard to do. Also Caravaggio… Magritte…

So you put Magritte over de Chirico?

Magritte is intelligent and witty. In his paintings the plot itself is funny and interesting. He painted some arcades, galleries and alleys… but it does not appeal to me, because it’s awkwardly painted, too flat... His plot is a different story, it’s always interesting, typical Magritte, but the form is not.

Is painting your whole world or maybe you do have a life outside it?

While painting, are you listening to music?

Actually, I am in the middle of a music crisis right now. I am addicted to music, I never stop buying discs, I insert them into my player and after just a second I switch it off because they get on my nerves. But I am still buying more and more of them. It’s an addiction, alcoholism...

Discoholism. Obviously, I wanted to be a musician, but painting eventually won as I had been painting since my early childhood and I didn’t have enough guts to take up music, to force my parents into enrolling me in a music school. In the 80’s you could find rock bands everywhere as everyone played some music. And so did I. Then I heard jazz, Davis. This music is still very much inside me and I do regret a lot that it’s not me playing. Painting is nothing in comparison to music. Any pop artist can move people and reduce them to tears and a painting cannot...

Well, it did happen to me while looking at a tiny portrait by Degas which you can find exhibited in the Musée d’Orsay, and some other times too... Do you prefer to listen to classical or light music?

Both. Nowadays I chiefly listen to the radio. A lot of Radio 2. I do listen to contemporary classical music. My head is just a big mess, a dustbin. I used to listen to jazz mainly, but now I listen to everything – shows, black music from the 70’s, the Pulp Fiction soundtrack etc. And I have recently bought Requiem by Gabriel Fauré and also Marlene Dietrich. I find her German very soft and beautiful. It irritates me when she is singing in English, but her old songs in German are great. I listen to everything, anything... 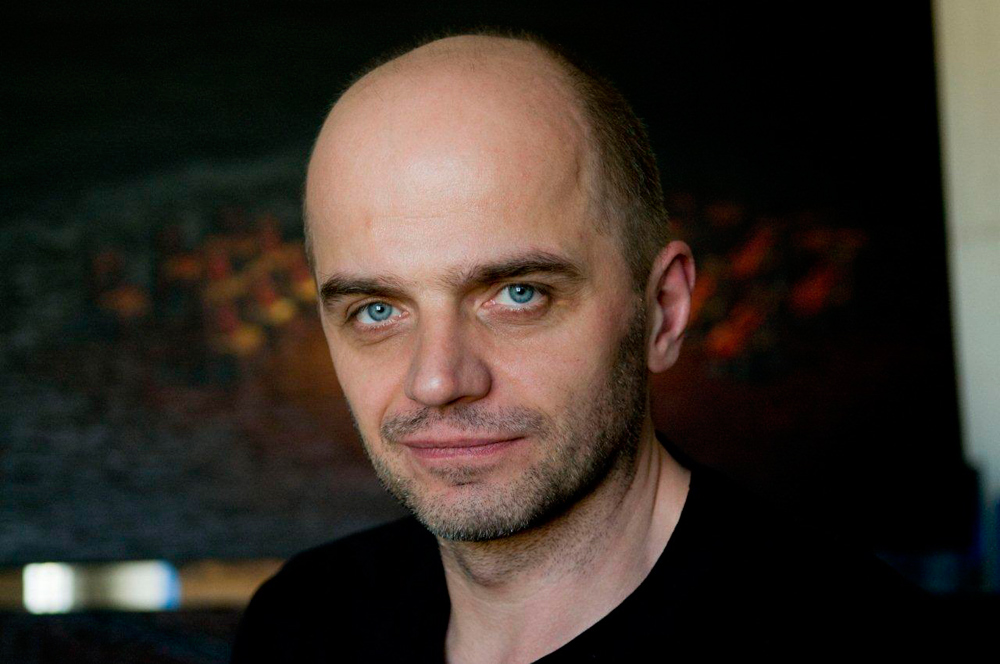 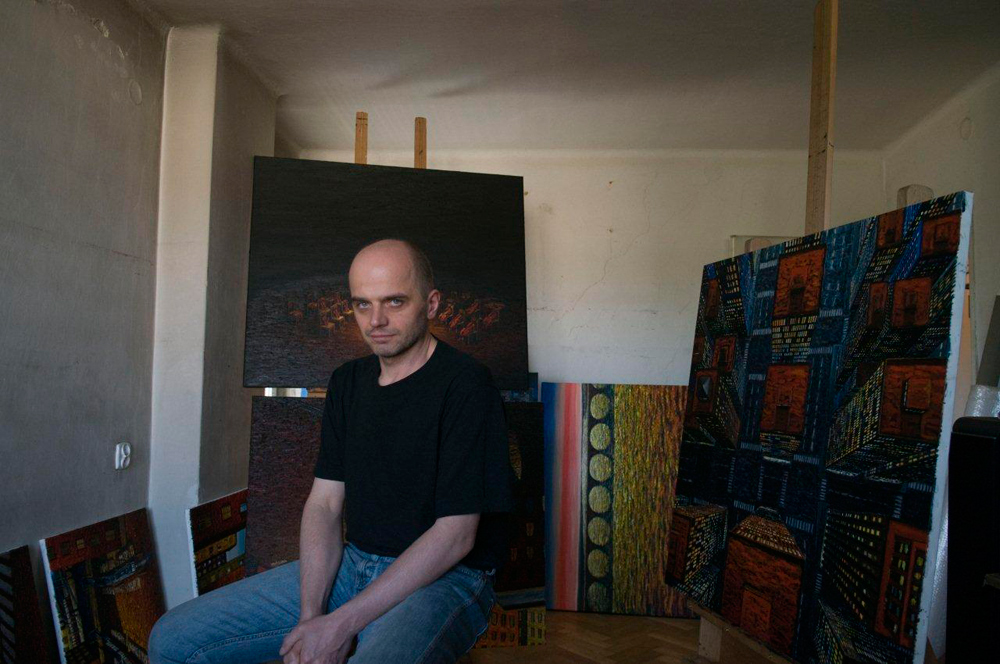 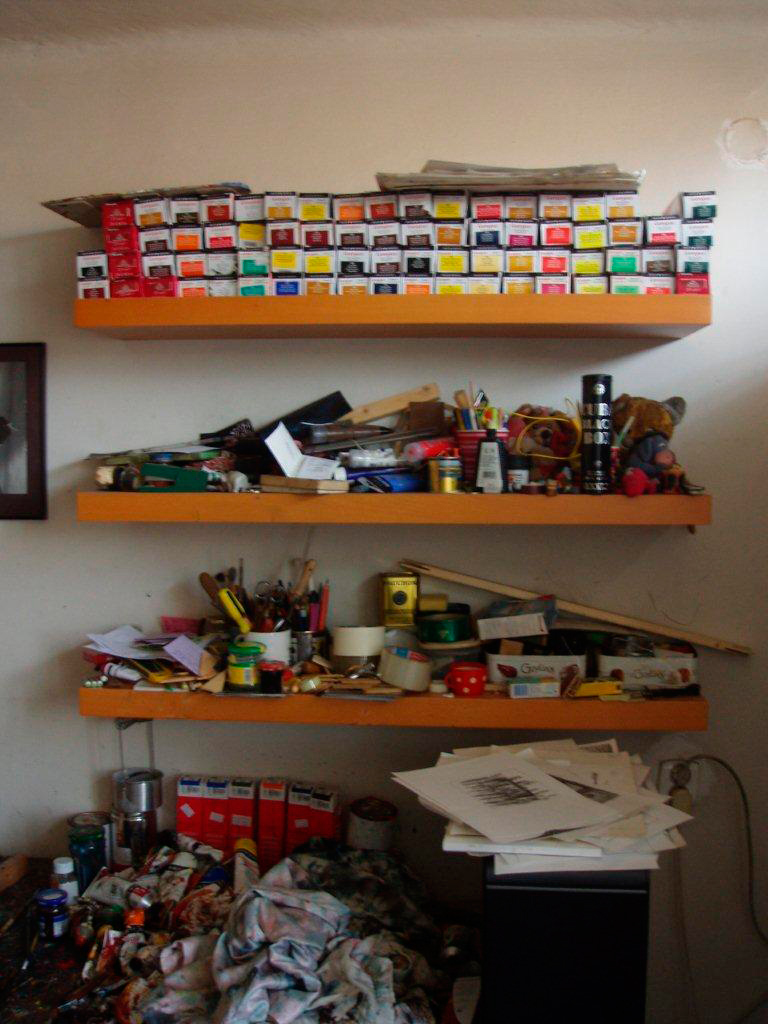 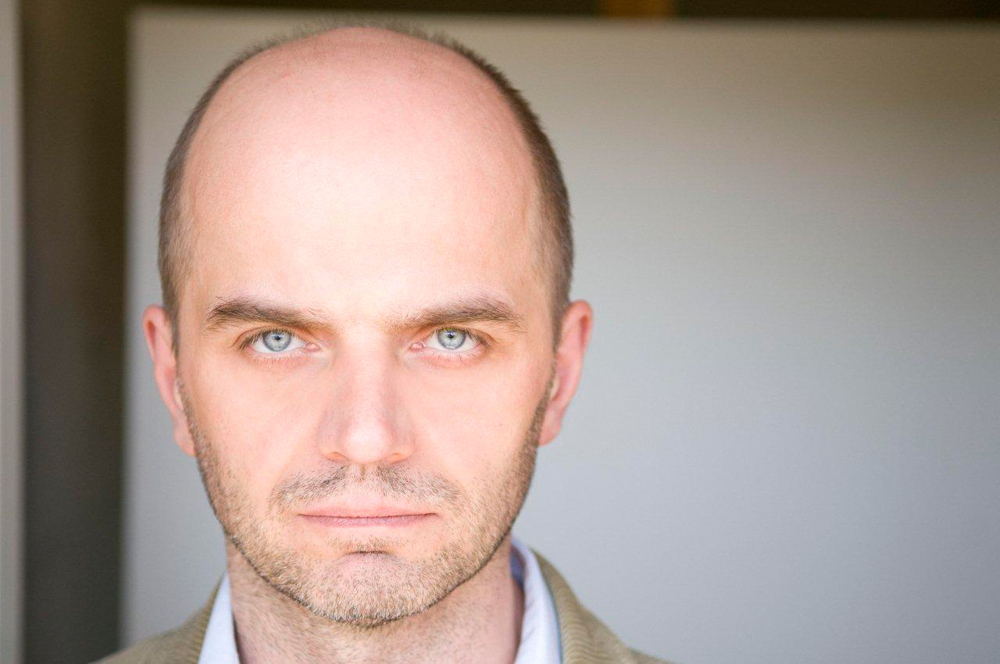 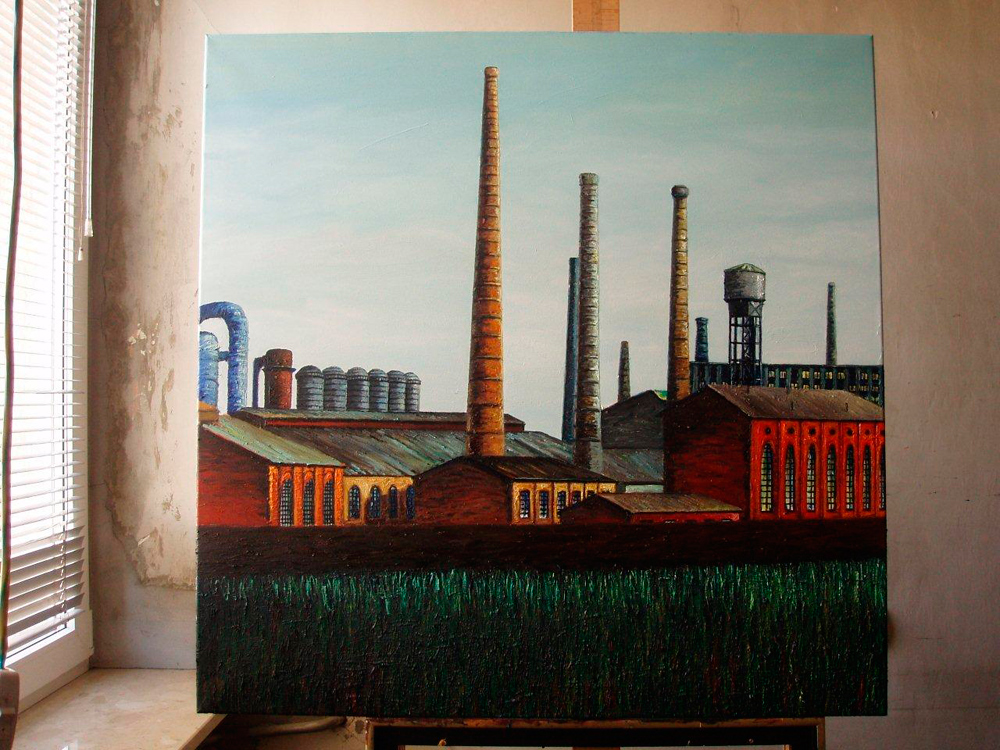 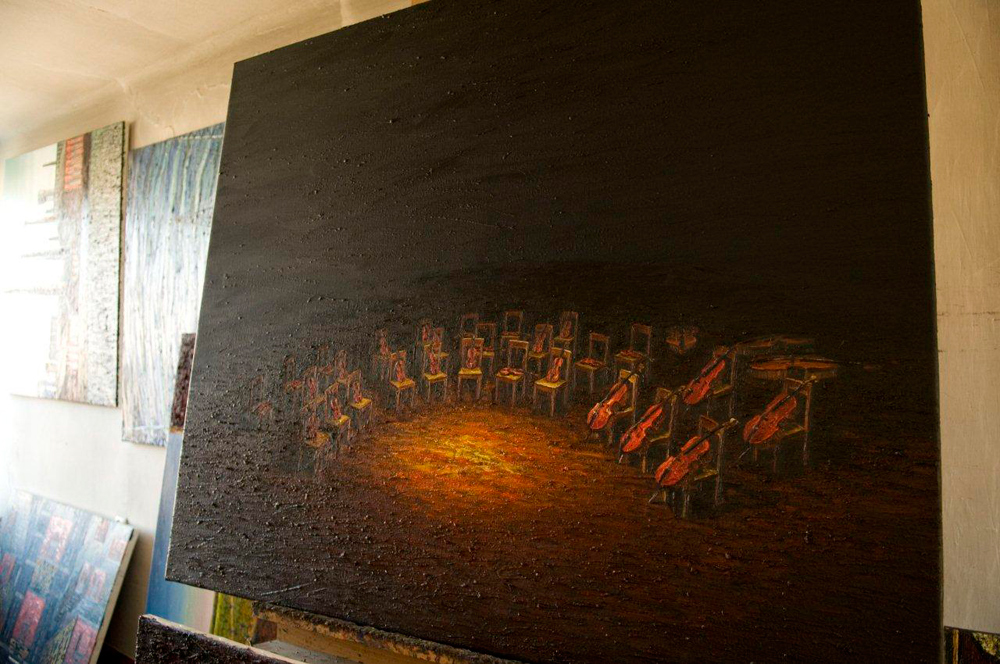 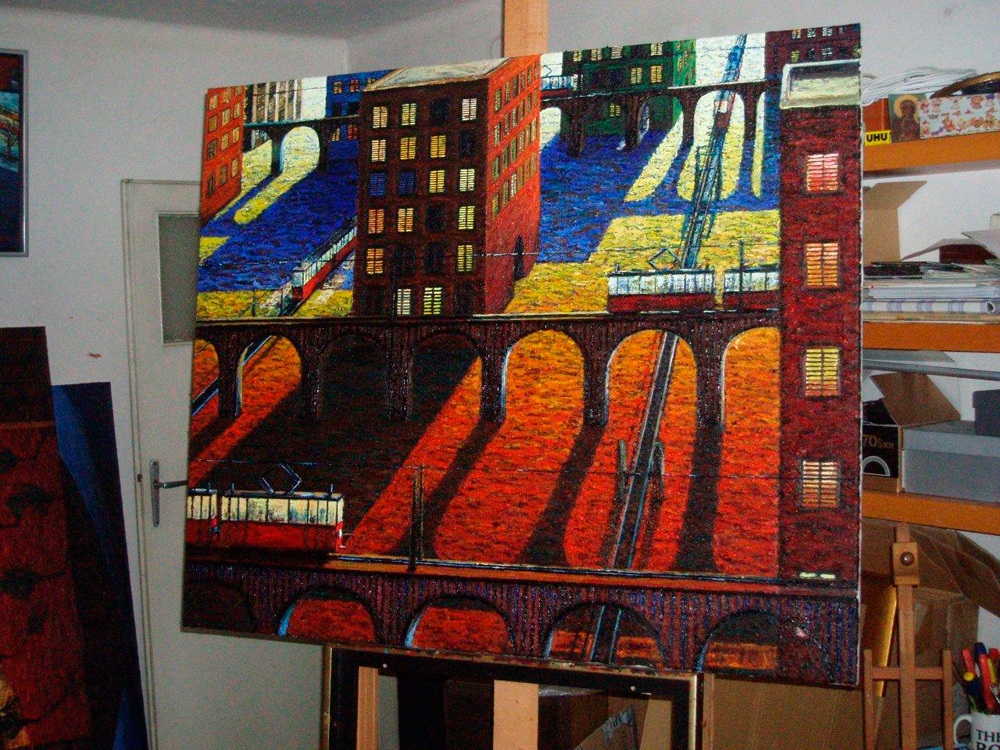 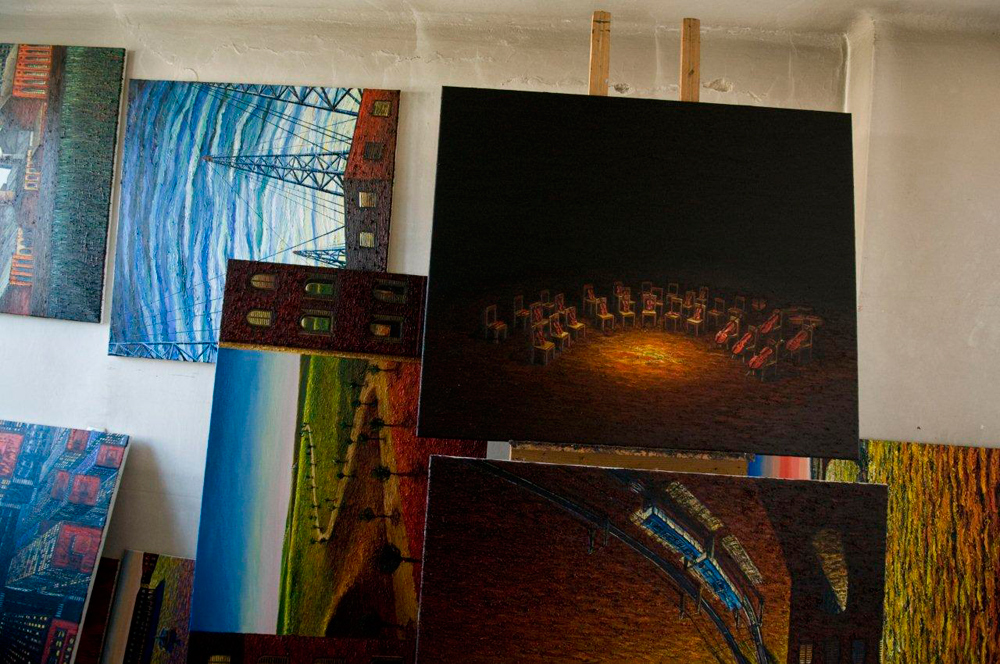