The Universe has perhaps not ceased to expand, but Adam’s Cosmos has long ago shrunk, assuming a safe size. For Adam, the horizon of Being is set forth by the floor-area of his bachelor flat. And it is within these confines that Adam amends the Creation. 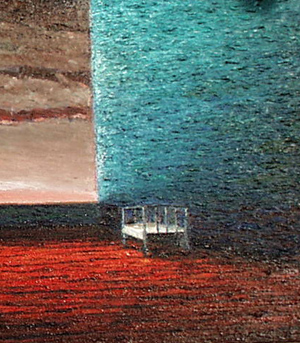 He paints slowly. He wants to avoid any errors appearing due to haste. Has anyone over there heard about a Patrzyk painting which was made within six days? Adam Patrzyk’s art is an idealist project which has been planned as a lifetime activity.

He is not in a hurry. Instead, he constructs his world laboriously and carefully. A world free of madness; a predictable one, indeed. A ‘natural reserve’ where access is prohibited to humans, since it is this reserve that forms a major threat to them.

There is no ‘breaking news’ stuff to it, no flooding rivers, or even breaking pipes. An unruly element of Water having been subdued in a bathtub and washbasin.

There is something disturbing which is happening beyond the horizon’s line, in the remote perspective of empty squares. On the room’s walls, the only thing we can see is some faraway fire glowing.

In a world situated Under the Volcano, Adam has found an asylum for himself, in arts. And, he is patiently painting his way-out over.