A Room With A View

Landscapes by Adam Patrzyk are just like travel memories for so many of us. ‘People look at my paintings and find there the places they once visited,’ explains the artist. ‘They say: Oh! Look, it’s the streets of Padova, houses in Siena, a square in Jerusalem.’ He finds this quite amusing since all his landscapes are fictitious. Adam is not very keen on travelling. For him the best place to be is his atelier in his hometown, Częstochowa. He doesn’t have a computer and he’s quite reluctant to answer his mobile. 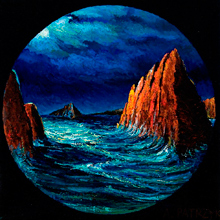 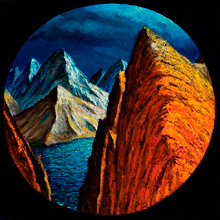 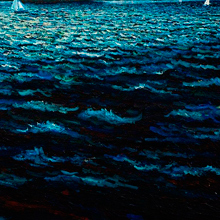 There are no people in his paintings. Streets and interiors resemble sets on a theatrical stage. Adam paints empty squares, libraries stacked to the ceiling with bookshelves, rooms with scattered musical instruments. Where the residents of those cities and houses are remains a mystery. We do not know when they left and if they ever plan to come back. Looking at Patrzyk’s paintings, we begin to ponder over the fragility of our life, the mystery of the passage of time, existence and passing.

‘At the end of my studies I started to paint empty interiors, conventional doors and windows. I focused on the symbolic meaning of entrance and exit,’ says the painter. ‘The paintings were ascetic, almost abstract, with red as a dominating colour. Since then I have been expanding this pattern. It’s been developing and the picture has become more spatial. At first, it was only the motif of entrance and exit that mattered, but then interiors appeared in perspective. Initially, they were empty, but soon I began to furnish them and add new objects. And so they were shelves full of books, and window shutters (that’s why people often think of Italy and I have never even been there!). In the background there is usually a landscape – a sunset, a tree, a piece of sky’.

Adam Patrzyk’s atelier is also like ‘a room with a view’. Only the view is neither an Italian palazzo nor a secret garden, but a regular low-rise building. And once in his painting, a shabby facade and rows of windows can become disturbingly attractive. 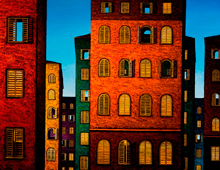 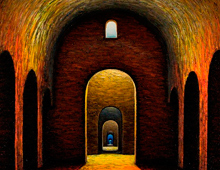 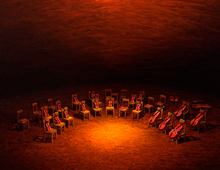 In the atelier there are usually a few paintings that he might be working on simultaneously. It’s a necessity since he is a slow and textural painter. His canvas surface is a sheer masterpiece of precision and intricacy. ‘I need some time to work on a painting, technical matters being one reason, let’s say. Oil paint takes a few days to dry, sometimes even a week. I put a layer on and wait. Therefore, I have to paint several pictures simultaneously or else I would die of boredom,’ he says. He uses just a few colours, but the effect is rich, almost baroque. Red is always most important. ‘Numerous painters claim that red should only be a constituent of the whole composition, because it’s too strong’, he explains. ‘But in my paintings it’s a dominating hue. I also love van Dyck’s brown. I use it for shadow effects while light is made of red and its tones. Once in a while I make an exception and light becomes yellow’.

Adam says one day he might incorporate people in his paintings, but not yet. He needs time to accept new ideas. Lately, after 20 years spent in his apartment at a very busy crossroads, he learnt to admire the noise of trams passing one another by and he began to paint them. Maybe he will conquer his domesticated nature and set off on a journey. He would really like to see New York and compare the fictitious Manhattan he paints with the original.