Sometimes it happens that artistic personalities, individual perception of the reality and – what’s critical – own understanding of shaping of the pictorial form become visible already during one’s studies. For these young students painting remains a significant means of expression. It should suffice to cite some names of the recent graduates of the Academy of Fine Arts in Wrocław who have marked their presence in the exhibition business, being awarded at numerous prestigious exhibitions. 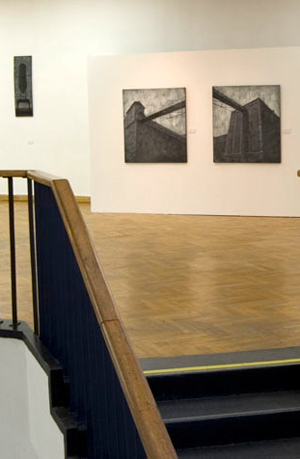 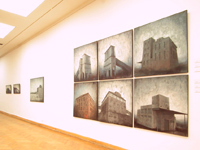 It is worth mentioning that they have all graduated from the same painting studio: Łukasz Huculak with his fascination of the subject and sensuality of the painting matter; Daniel Krysta with his most sublime play on signs and “walled-in” space; Karolina Jaklewicz and her combination of pure pictorial form and slightly surrealistic vision of plain geometrical solids. To this group of painters - so diverse and almost self-contained - Joanna Pałys, a graduate of 2008, obviously belongs. Yet I believe that these students have something in common that is actually undefinable in painting and can be attributed to spirituality and undefinability of the poetic climate of their pictures – apart from the fact that they are of immanent artistic value.

As her former schoolmates from the studio, Joanna Pałys has always followed her own path – in her case both figuratively and literally. It seems that in the process of choosing topics of her pictures she has relied less on artistic speculation than on observation of the surroundings: Strzegom quarries and devices typical for this region. It may be assumed that these apparently ineffective, peripheral motifs revealed in her imagination their abundance of “latent beauty” and extraordinary existence in the suburbs of the urban agglomeration. Hence these everlasting wanderings across intentionally chosen and maybe a little accidentally discovered paths in order to record – possibly condemned to destruction – relics of the industrial architecture, transmission lines and conveyor belts.

For this recorded postindustrial world would be of little significance if it weren’t made into a painting sign, if there weren’t a perfect eventual correlation between a motif and given painting measures. It is astounding that what formed an affirmative topic of a picture 60 years ago, today is for her an object of reflection on the condition of the passing reality. Above all, it reminds artistic meditation, solidifying in the matter of a picture, seemingly stripped to white, grey, black, dimmed brown and blue.

Following Joanna Pałys’s individual trail we are moved by a fading rhythm of Nocturnes and a bizarre harmony of a zigzag line of conveyor belts with almost cosmic space; we are struck by melancholy of monumental and quite mysterious architecture of recent Objects. This special painting sensitivity makes these paintings greatly expressive and this special way of perceiving the world makes them one of the most interesting entries in the young Polish culture.