To her home in India she takes photographs of old factories, devastated conveyor belts in Lower Silesia, all grey and wasted by time. Since she can remember she has always liked spending her time in those godforsaken places that are doomed to a slow decay and eventual death. Whenever she wanted to ponder over something, or to be alone, she would go to have a look at closed factories or mines, or to walk in the vicinity of the quarry. Contemplation of the post-industrial landscape allowed her to go deeper into herself – it was almost a state of meditation. 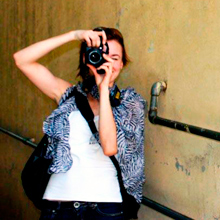 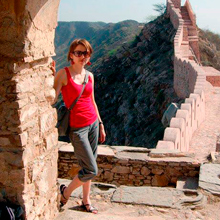 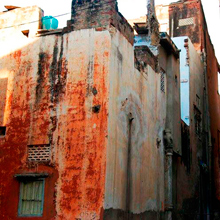 ‘I lose myself in that landscape, stop thinking about superfluous things, I am only here and now. Being in these places physically allows me to regain a sense of balance and equilibrium, and painting them is an attempt to go back to this state.’

Her hometown of Strzegom is bordered by stonemason’s shops. Hundreds of gravestones, hundreds of grey granite plates. Greyness for hello and farewell. And in the middle of it all – the quarry. Maybe that’s where the greyness of the paintings comes from. Other hues appear only incidentally – India with its sun and its complete range of colours surely has its influence, just like in the painting with a red building which brings to mind the traditional colour scheme of local façades.

‘At some point I felt like going crazy with colours. It all started with an innocent small rusty dot in one of the earlier paintings – so tiny that it was almost invisible. To some extent it is also surely connected with the colour of paint used to redecorate façades in Jaipur, a colour which is omnipresent here. It is also the real colour of the brick that the building is made of (substantially strengthened since in real life the building was covered with a thick layer of dust). All this contributed to the making of one painting. I simultaneously started two paintings with that colouring, but I couldn’t keep it with the second one and dimmed the hues. I think I had to create this painting in order to be able to go back to my greyness, happy and relieved. When at work I try to reach a state of concentration and calmness and I believe that rich colours may distract me.’ 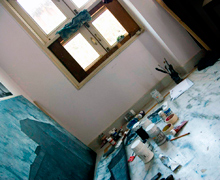 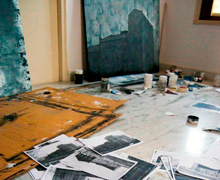 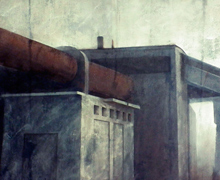 If you measure the time between travelling, between journeys to Poland, it turns out she’s already lived in Jaipur for a year and a half.

‘It’s hard to say whether Jaipur has influenced my perception of scenery. I guess it has. And it has surely influenced my painting, mainly by brightening the range of colours and making buildings more monumental.

I still look around with a feeling of astonishment at the local architecture. There is much more freedom in construction here than in Poland and people do use it.

Jaipur has made me feel more related to Poland. And I am not talking about nationality here, but about a specific place in the world and a landscape that comes with it. In India I feel more like an observer, separated by the boundaries of skin colour. This is not my landscape and I do not co-create it. In Poland I feel an integral part of the scenery, as if the boundaries were fading away and all the cells in my body were vibrating in the same direction as the colour of Strzegom’s granite. It was my departure that raised my awareness of feeling related to my place of origin.’

That’s why she takes all these photos, they travel with her either as printed copies or on her laptop. Then she spreads them all over her Jaipur atelier, puts them up on the walls. They’re everywhere – on the floor, on the tables, in her memory.

‘Yes, you’re right. When I am far away, I miss Polish landscapes a lot. I miss everything that’s connected with it – windy weather, overcast skies, dried-up grass.’