It was 13 years ago that Darek first walked into the gallery I run. He was a young graduate of the Cracow Academy of Fine Arts then. I soon realized that collaboration with this artist would go far beyond the ordinary partnership of artist and gallery. 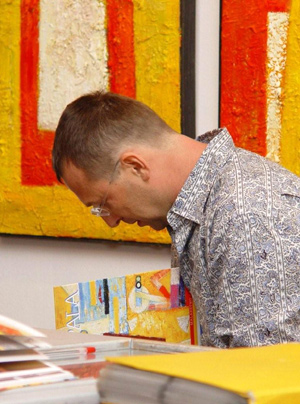 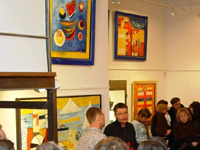 What Darek painted at the time was perfectly suited to the dynamic 1990s. He was the chronicler and decorator of that epoch. It was the time of his greatest commercial and social success. He was able to adapt Cracovian traditions and imagination to depict a completely different reality: the reality of Warsaw, a city in flux.

Darek’s paintings fulfilled the aesthetic yearnings of all those who after the grey and gloomy years looked for joy and exoticness in art. The young artist allowed himself to be carried by the tide, which is also a skill not everyone has. He knew how to make the most of the first symptoms of interest and the great popularity that followed. He worked hard, and I tried to organize interesting exhibitions for him. He travelled a lot, looked for beautiful places and intriguing people. He made friends with the admirers of his art, not only in Poland, but also in Germany, the Netherlands, France, the USA. The young man from Częstochowa got everything out of Warsaw that the city had to offer at the time.

The late 1990s, before he left for the USA, were a time of breakthrough in his work. In the years 1998-2000 Darek’s style changed significantly. The anecdotal layer was all but gone. Thanks to that shift Darek avoided the sad fate of imitating himself. He lost some clients, but gained new ones. I believed this evolution to be artistically valuable. I organized small, intimate exhibitions, in which I tried to show the viewers how to read Darek’s new painting. One thing had not changed in them: colour. Colour is the area in which Darek operates with z absolute freedom. That is his real liberty.

After Darek settled in Miami, our collaboration fortunately did not dwindle. Despite the distance I organized several major shows for him: Made in the USA and Aquaria, in which I tried to show the most important discoveries of his American years. Darek has always been impatient, quick to get bored, and that saved his art from routine. New ideas kept emerging: paintings on wood, abstract paintings. And again the same story was repeated: in a completely different kind of space, in hot Florida, Darek continued, with great talent, to play the same colour games whose rules he’d learned in his youth in Częstochowa and Kraków. That ability to adapt wisely is a great gift, which allows him to develop artistically in any conditions.

I am confident about Darek’s future achievements and I hope I will have the privilege of presenting them to you.