Do Darek Pala’s latest paintings deserve special attention? Or is the exhibition, Pala adieu, just a courteous farewell gesture on the part of the gallery towards an artist who’s moving across the ocean? 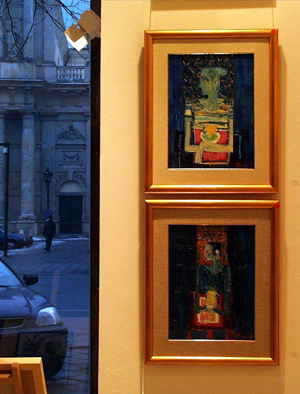 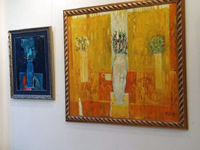 Anyone who has seen even two of his earlier paintings will know on encountering these works that this is not an exchange of bows. We have here a new Pala. Ostensibly, the paintings still happen in the familiar fairy-tale reality, in similarly exotic settings. The characters also appear similar: twiggy girls with their hair in a bun and stiff guys with sideburns. There is no perspective, no illusion of a third dimension, because everything is subordinated to the fantastically bright colours. This is were similarities end and the unknown begins. It is clearly visible in the seven delightful miniature portraits executed in size 13 by 18 cm. Pala has stopped weaving his pictures with decorations, interlacing all those spirals, triangles, zigzags. He’s given up the chatter and the decorative jumble. The texture of the thickly laid paint is now the only decoration. The effect is almost bijou. The paint becomes a relief, so protuberant that one may get a notion to read the pictures with one’s fingers.  This sensuous quality is emphasised by the sheen, as fresh sometimes as if the artist had just put down the brush. The faces are also different. The cartoon, always featuring the same favourite heroes, is over. The miniatures are portraits of persons; they are still summary, but already characteristic and unlike any other. Faces which, once seen, remain in the memory.

The artist has succeeded in transferring the concentration manifest in the miniatures onto large-size still life pieces, in which he’s also turned away from decorative confusion. Instead, he caresses the surface of the picture, changing the intensity of colour, the density of paint. The number of objects is limited. A jug, some bananas standing to attention, coffee cups, a percolator. Sparse enough for Pala. The new artistic tissue, however, makes up for everything, forbidding a sensation of emptiness. The Red Jug or the almost abstract Yellow Jugs are real concerts of one colour. His Colourist forefathers at the Cracow Academy of Fine Arts would be proud of such “clearly resounding colour”. Is this Pala in search for pure art? Without his precious anecdotes, cartoon like situations and fancy titles? Exactly. Pala’s new paintings have no titles. Some of his admirers will probably be unhappy about it; others will understand that titles are literature, which doesn’t always benefit art. A thing named is that and nothing else. Lack  of ambiguity paralyzes. And Pala is a master of interpretation. It is manifest not only in the manner in his new manner, but also in the subject matter of his pictures. They show swimmers, fish, holidaymakers sitting on towels on a beach or bathing in the sea: in brief, an a painted waterland, consisting - contrarily to what we’ve seen so far - not of situations, but separate motifs. This again shows that Pala is stooping lower and lower over the world, concentrating on a small section of it. Pars pro toto - a part for the whole - is a new method in his imagery. The swimmers are a pretext to show various studies of a head. En face, profiles, semi-profiles wearing glasses in thin frames and tight-fitting bathing caps are cut off from the rest of their bodies by the vibrating surface of the water. Attention focuses on one element , which must convince us that the rest exists.

Pala demands more and more from the enthusiasts of his art. He’s taken away the playful decorativeness, the anecdote, the titles which made it easier for them  to read a painting. Finally, he forces them to bend their necks and contemplate the world from the perspective of a curious three-year-old. And although he has risked a lot, everyone is still on his side. They submit to the experiments willingly and trustingly. The reason is that Pala still paints very beautiful pictures. They have the same temperature, the same joyous radiance and sincerity. They have only become more mature and focused. That’s why I am optimistic about Pala’s future on the other side of the Atlantic. Wherever he goes, there will always be people willing to enjoy his art.