I first saw her tulips in 1992, in a small pub at Podkowa-Leśna. The painting hanged on the wall of a dark corridor, between the kitchen and the restroom. Next to the tulips, a sad cloakroom attendant was seated, unable to see that behind his head, the gate to a paradise was opening. 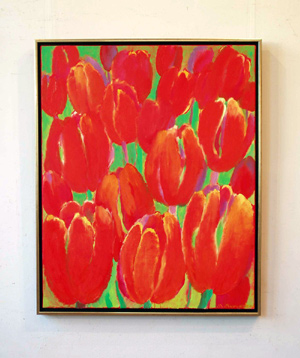 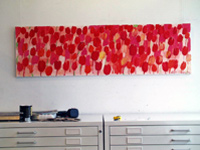 The following Sunday, I brought Ralf along. Ralf was a young German lawyer, and I was supposed to become his agent in charge of Polish art. He had a discerning eye indeed. When he stopped in the corridor in front of the tulips, he didn't hesitate a while.

Ralf lived in Poland for a year afterwards. Long enough. Quite a crowd of Warsaw painting collectors have twisted their way through his smart bachelor's apartment. The painting was hanging on a honorary place, so guests were leaving Ralf's place with tulips in their heads. Ralf's guests were then turning into my customers. Beata continued to paint, and I organised consecutive exhibitions of her paintings, whilst Ralf enjoyed the position of an aesthetic guru.

This was the way in which Beata Murawska, owing to some tulips, added taste and colour to the carnival-like nineties' decade. Ten years have passed ever since. The times have changed. Ralf has been away for a long time now. Beata will son leave her house and garden at Podkowa. Now is the time to stop. And, to muse upon Beata Murawska's paintings. Let the present exhibition give us such an opportunity.