Flowers have remained. At an earlier stage, there were also other themes of Beata Murawska's paintings, yet in time, they have disappeared, and flowers have taken precedence. Their scales are different; sometimes, their sizes can be plainly monstrous, but they do not trigger panic: on the contrary, they seem to be attracting into the depths of the paintings, particularly when the latter's format is so large.

No-one paints flowers like Beata Murawska does. They are gifted with life, and mystery. It seems to me irrefutably that the painter tries to establish some strange thread of mutual understanding with them. She bewitches. She can enchant both us and the flowers. Perhaps this is because we so willingly stand by them, our sight hypnotised. These charms are of a sweetest sort, since these are hexes of a good fairy who reigns over the flowers.

I should think I know how these paintings are made. No matter, any more, what's out there behind the window, or around her: what does matter is the palette. Beata's pallet is, I think, the most unusual and abundant painter's palette I have ever seen. Cones of dried colours and craters of fresh ones get accumulated on it, in apparent disarray. Apparent, did I say, for Beata moves amidst it all quite skilfully. And so she mixes, selects and matches, has a go for a colour or two, and places it on the canvass. And so do the rows of tulips emerge. No matter what those tulips looked like on a flowed bed, or in nature. Now, there is a completely new, painter's species of tulip: namely, Murawska's tulips. Not similar to any others. A not-to-be-imitated, unique product of pure painting art and unrestrained creation act.

A love for living and pure colours must have been dwelling in this painter for ever. This seems to be stronger than herself, or any educational background.

Murawska studied with Professor Stefan Gierowski. Perhaps it was him to suggest to the painter how to best match colours with one another, so that they resound with even a purer tone; so that they may delight one even stronger with their splendour. Some time ago, shortly after the graduation from the Academy, Beata Murawska's paintings looked very different. Her compositions were built with a smaller number of elements, were simpler, more monumental, perhaps more difficult to read, but at the same time, less characteristic. There is one thing, though, that has remained unchanged: the dazzling colours.

In Beata Murawska's art, as is the case with several other painters, paintings get purer and purer. This is because paintings are so irresistibly willing to live their own lives. That means, they tend to borrow a living energy from the painter who has painted them, but this is done practically just in order for them to win autonomy and independence. And so the story goes with Murawska's paintings. At her previous exhibition held at the ART Gallery exactly eight years ago, in August 1995, one could still recognise landscapes, places, and ambience of Podkowa-Lesna, the small locality near Warsaw where the artist lives. Today, there is less and less of that, the flower compositions irrefutably heading toward abstract art. I cannot really understand why has Beata not decided yet to cross that thin borderline dividing her pictures from the abstract. Is this due to a purely womanish attachment to flowery forms, or something beyond that? A profession of faith in a creative power of 'things mundane'?

The world like a flower – this is the simplest and shortest definition of Beata Murawska's art. One can plainly say that the process of 'flowering' of the painter's world is progressing and has not ceased to generate beautiful effects, that is, beautiful paintings. Flowers, small flowers, flowerets – there is so plenty of them there, and this is good as it is, for this is the sort of flower-based order that reigns there. And it would be best for it to remain so. 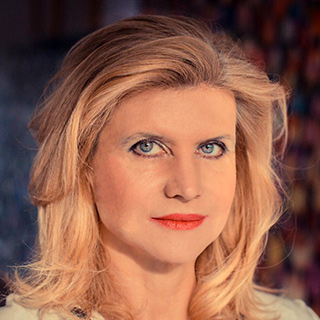 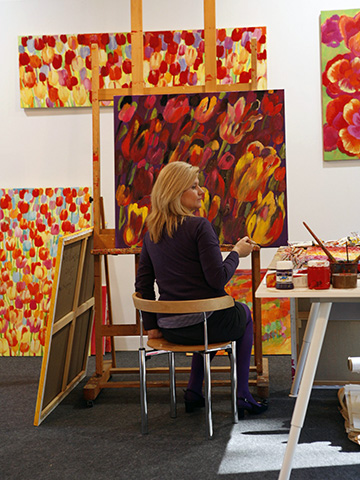