She’s a sculptor for whom the human body is a set of solids which, in spite of changing configurations, never cease to be solids. 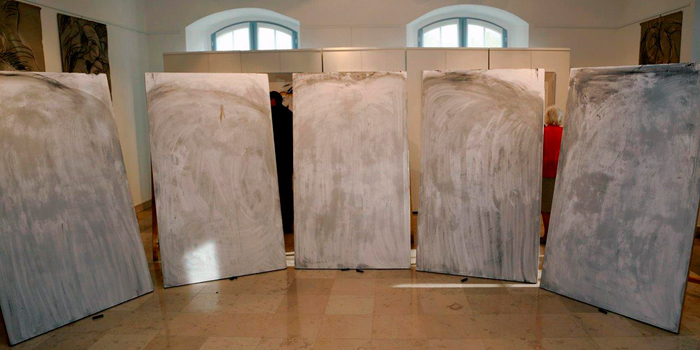 It seems to me that, when it comes to art, Joanna Mieszko–Nita likes female bodies a lot more than male ones. It does not surprise me one bit, although you never know with those female sculptors to whom male angularities sometimes seem more attractive than female curves. Joanna, however, can balance that roundness with tectonics, corporeality and gravity, though not necessarily the force of gravity. What I’m referring to is some kind of specific gravity or seriousness of artistic expression. Her works exude serious intentions, respect for her own artistic skills and serious approach to what she has been doing with such passion… And that passion, they exude as well. Joanna creates first-person art. I know that this kind of statement might be an overstatement, but to me it seems to be a perfectly accurate depiction of her artistic quest, especially in those moments when I watch her face at one of those live painting & drawing performances which can be assisted by the audience. Those shows transform her by providing her with energy, power and a strange confidence which coexists inside of her with all that self-doubt. 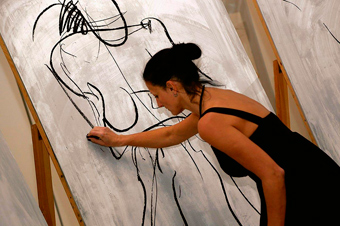 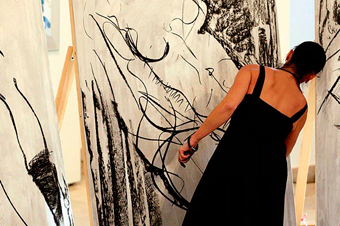 In his book about Degas, Paul Valéry dedicates one of the chapters entitled “Degas, dance, drawing” to nudity and he says: “To the painters of people, nudity was by far the most important thing in the world. (…) You can sense that for Titian, who depicts Venus in her purest corporeality, softly resting on a purple bed in her divine and artistic perfection, to paint is to caress, to unite two pleasures in one glorious act, (…)”. But then he makes quite an opposite comment: “Rembrandt knows that each body is made of mud. It is the light that transforms it into gold. He acknowledges what he can see: women are what they are. He prefers painting obese or emaciated female bodies than perfect ones and even those few beauties he painted owe their beauty to vital forces of some kind rather than to the shape of their bodies”.

It is in the context of such duality between body cult of some artists and meditation on ephemerality of beauty performed by other ones that Joanna creates her nudes.

Such drawing studies are usually merely an introduction to further searchings. A sketch, which in the previous centuries used to be just a preparatory study, can now become and remain the final, ultimate work of art, which is the case of Joanna Mieszko’s sketches.

They attract with strong tectonics of female bodies, be they beautiful or less so. The most important thing about them is that they belong to women. I cannot shrug off the feeling that those bodies are inspired by what their author finds in the mirror. Nevertheless, since she avoids face depictions, those female curves become a totally universal and ultimate statement on female anatomy and its presence in contemporary art. Joanna is not afraid to do it, more so – she seems to find some kind of pleasure in depicting herself and, at the same time, every woman captured in the essence of her own body.

Thick line with a touch of color is what sets her drawings apart. They can but don’t have to be a reflection of a real body observed in the mirror, in a photo or, when circumstances are particularly favorable, during a surprising meeting of bodies on a beach, in a gym or fitness club.

This approach of the artist can be very different and bring very different consequences to her own works. A different and distinct drawing style makes us confront with a very autonomous art whose author, while respecting eternal canons, wants it really badly to find her own path and expression. And she manages to do it, cause it is really easy to recognize her works. She has managed to find her own stroke among so many possible ones. Her searching effort has been awarded with a successful discovery and, as a result, artistic fulfilment.

Joanna enjoys live drawing – a kind of drawing theatre whose most important Polish representative was Franciszek Starowieyski. He liked female curves and shapes as a topic and he drew his inspiration from them. This kind of painting or drawing performances started, however, much earlier, namely in France at the time of Pablo Picasso, Yves Klein, Georges Mathieau, etc.

Hence, Joanna could take inspiration for her artistic searchings from Starowieyski’s or any of his French predecessors’ work. Without jumping to conclusions, it is safe to say that this form of art is very spectacular and dramatic.

I’ve seen photos of this kind of drawing show. Joanna draws females bodies with charcoal on a few pre-primed panels, which are harder and more suitable for this purpose. She draws on all of them moving from one to another. For anyone who observes her it becomes obvious that her movements are instinctive, peremptory and spontaneous. A second before drawing the first line she seems not to know what it will look like, where it will go and where it will end. And it is hardly surprising, cause at the very moment she begins drawing, everything becomes clear and inevitable. I wouldn’t call it evident, cause you can sense some hesitation in these drawings as well, but it makes her actions much more genuine and her statement – more honest. A few lines are enough to let you guess the shape and those first lines are soon followed and completed with thick and full ones, drawn with the wider side of charcoal. The show becomes more dramatic, expression intensifies, drawings get more and more expressive. The simplest light and shadows. Basic stuff like at the beginning of art when shadows were outlined. In this case the shadow’s part is played by gestures which suddenly appear on the surface of canvases and leave a distinctive mark – a completed drawing or, I should rather say, a sketch, cause in Joanna’s case those two terms are equivalent to each other.

When Joanna started a relationship with Edward Dwurnik, she began including in her works an element which had never featured in her art before – city landscapes, or, should I rather say, variations on urban spaces, games which the skies, clouds, air and houses play with each other, town planning or lack thereof.

A specific technique used by the artist – broad, truncated stylus immersed in ink – provides her work with a dramatic effect. Pseudo-horizontal lines followed by but vertical comas, squares but also dramatic black vertical lines are, surprisingly, more than enough. Joanna chose a solution which is very simple from the technical point of view, but allows her to deliver more than rewarding compositions, which can adopt the form of both a small-sized drawing and a quite large painting (she also paints acrylic versions of such paintings). It seems that there is a kind of calligraphy in those works whose esthetical aspect is fully reflected in the gesture and itinerary of her brush/stylus immersed in ink/paint. Sure, she’s fast, but she’s also precise. Speed and precision go along with each other, it works really well and it should work like that in Joanna’s works. Those works bear quite precise names. You are quite sure that you watch a landscape of Szczecin, Szczecinek or Chojna where she lives. There are off course other places such as Krynica, Szczawnica, Bystrzyca. There are also other places, such as Krynica, Szczawnica, Bystrzyca. Landscapes of some fantastical places born out of pure imagination and experience rather than depicting real locations. Are also created in the same way. 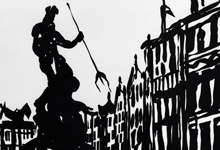 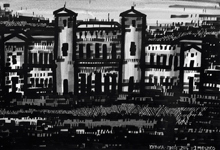 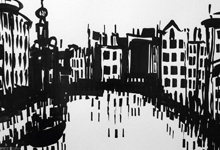 My thoughts went to a French painter who used to be very important for Dwurnik but has fallen into oblivion ever since -Bernard Buffet also painted in shades of black – black only – which looked extremely dramatic and expressive. He depicted this way e.g. Paris which can hardly be associated with black shades, but Buffet did it really well. To be frank, I don’t know if Dwurnik managed to make Joanna like Buffet, show his paintings to her, explain how important he was to him. Perhaps he didn’t, but many years ago I bought for Dwurnik a huge painting of the French artist, so Joanna may have discovered it. The inspiration, if it ever existed, is quite remote and not that certain, but I couldn’t prevent myself from mentioning it if it came to my mind.

There is one thing which distinguishes and unites all of Joanna’s endeavours – expression. When she gets to work, this calm and peaceful woman transforms herself into a powerful and very expressive artist. She creates her own world and claims her own space which becomes hers. This is the secret of her strength and sharpness.

Constancy and ephemerality, perfection and ugliness, corporeality and ethereality – all of these can be found in Joanna’s drawings, sculptures and paintings. Seeking a form for those contrasts is what defines her art and her personality, which is so honest and open that it does not need any artistic or other kinds of strategies. Her works are a result of her discoveries and experiences, moments of insight and inspirations which she collects at work and outside of it.