We long for provincial life: life that runs slowly, with quiet and unassuming happiness. Perfect provincial life exists in books by such authors as Bruno Schulz or William Faulkner. During a journey it may seem for a while that we see it from the train window. 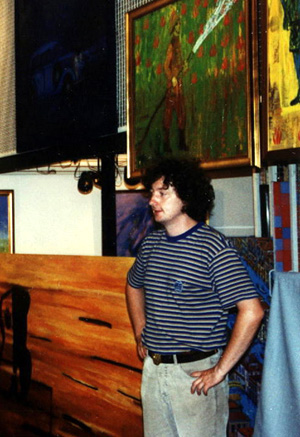 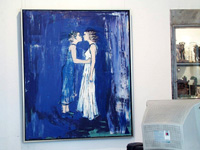 At the same time, the provinces are everywhere. And they are the only places where we can still observe the decay of matter. Metropolises grow; the material world comes into being faster than it disintegrates there. In the provinces, everything stands still. Everyone who can leaves. In recent years, one in six inhabitants has moved out of Częstochowa. The promised land is elsewhere. Those who stay try to patch the holes here and there. The worst vandal is time. Paint, applied thinly in an attempt to be economical, flakes off quickly. Fences and bus stops need repainting; shops signs and tablecloths have holes.

Jacek's paintings are created out of scratches, scrapes, streaks of running paint, which are the same to them as the grain of photographic emulsion is to Wojciech Prażmowski's photos: it is in them that a material image is recorded. Yet the matter of Jacek's paintings flakes and falls off. Old layers of time are showing from underneath, while on the surface we see an aeroplane, an angel, a beautiful girl. Time is a vandal, but in Jacek's paintings it can also be a co-author. Jacek has not only studied history; he has a sense of time. The wolf emerges from darkness and disappears again. The beautiful girl is only young for a moment – that's what makes her so beautiful. She was wearing a white dress, she had a bicycle, she was holding her sister by the hand, there were tiny flowers in the field and in her hair – the memory accumulates images like archetypes. Firemen look like those you saw in a picture book as a little boy. The angel once appeared to you in a dream. Truth only reveals itself once. To paint something, you have to remember it. New images are superimposed on previous ones – like layers of paint, like memories So many images, so many beings, so many gestures, so much to remember and paint!

I envy those who see Jacek's paintings for the first time. I have seen many and have become too accustomed to the nostalgia he paints into them, using it in much the same way as he uses paint. Each of Jacek's pictures records the gap between the beauty of a memory and the impermanence of the matter it's made of. This crack hurts. One can get used to it, or ease the pain by introducing an elegiac tone. Everything moves towards greyness and decay, but before they finally happen, a procession of colorful images from our childhood passes in front of out eyes: angels, dreams of flying, cyclists met by the side of the road.

The provinces are a horizontal place, one that makes you look down, at stones by the road, bent fences, low-growing weeds. The matter of Jacek's paintings is born from looking down in this way. But the spirit of those pictures is horizontal: it is ever-recurring memories, aspirations and prayers: things that lift us up.