Everyone has their "little town"

The lying figure of a beautiful woman is another standard of European art, exploited by the greatest masters from Titian to Manet, later to become a visual cliché. Łydżba is again attracted to a banal theme from the popular imagination of a small town. 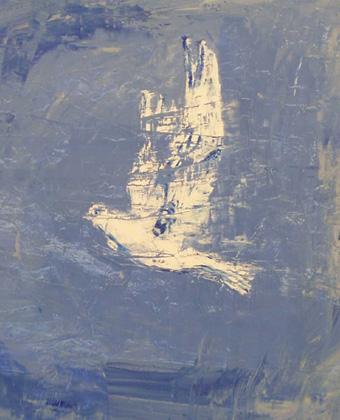 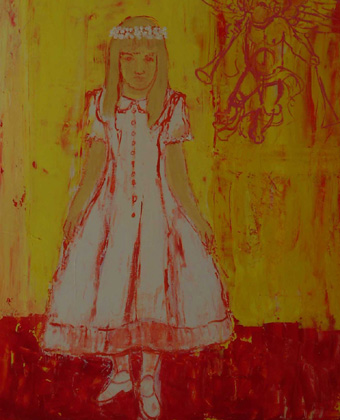 Jacek Łydźba's (b. 1966) paintings are scenes from the life of the small town of his imagination. Everyone has their "little town" - a region of images which remain after strongly felt admiration, delight or fear. The heroes of Łydźba's paintings, although they are at home in the world of a sensitive child's emotions, speak the language of adults. Artistically mature form and a thoroughly modern aesthetic have been applied to subjects such as mighty, dinosaur-sized aeroplanes, a golden-haired boy riding a lion, ladies as pretty as in an operetta by Offenbach, and girls wearing white lace dresses. Thanks to the roughness of Łydźba's style, those sentimental motifs still move and amuse us, even though it would seem they should have been buried by kitsch long ago.

The aeroplanes and automobiles painted by Łydżba are not so much products of human technical thought as fascinating creatures with a life of their own. They belong to the same family as dragons and dragon-fighters, and are no relation whatsoever to a combine harvester or even a photocopier.

Girls going to their first Holy Communion in white lace dresses are one of the essential elements of the ideal image of childhood. Łydżba interprets this imaginative standard in a number of different ways, so that each time it assumes a slightly different shade.