Faces of women – innocent, perverse, dreamy. Their eyes, cheeks, and mouths fill and burst small paintings. Adam Korszun has been painting portraits, filled with tension and anxiety, for years. They are his angels and demons.

While studying at the studio of Jan Tarasin, he was taught that it is more important to think than paint; that “the art of silence” is of utmost importance in one’s work. He took this to heart: It is quite clear that Korszun’s works, loaded with emotions and pulsating with narration, come into being in solitude and concentration. “Are these small, abstract paintings or faces? I always start my work with a violent sketch – so much so that sometimes the board on which I am painting becomes damaged,” he says, “I later apply several layers of glaze in order to cover the initial strokes. I sit and look – I look and look, the way my professor told me to do – and I keep applying subsequent layers.

He painted strange scenes where reality mixed with surreality – all of this in an aura of a particular poetic and anxiety – such as in the painting “Hitting the Ground” where the landscape is faithfully reproduced with a man slamming the ground with a hoe with a cow grazing behind him. A strange, intriguing painting.

Not long after this, Adam painted his first little portrait. It was the face of an alien. He found it in some fantasy magazine and reproduced it in his own way – quite well and in a romantic manner with Rembrandt-style lighting effects. Since then, he has been painting almost exclusively the faces of girls and women.

After college, he returned to his hometown of Biała-Podlaska and completely by accident became a local enfant terrible. In a provincial town, a painter having graduated from the Warsaw Academy of Fine Arts must stir interest and even disgust. There probably is not a girl in Biała-Podlaska whom Korszun has not painted. First, he photographs them and only then, based on the picture, a portrait emerges. And while the eroticism of his works does not offend anyone in Warsaw’s galleries, Korszun’s art sometimes does elicit unhealthy emotions in his hometown.

Television actresses sometimes also serve as Adam’s models. He also photographs them and then creates intimate, decadent images. There is in them some type of yearning, obsession, hidden desires, and perversion. The titles reveal the whole story: “Take me with you today”, “I like to look”, “Don’t allow others to touch you”, “I want to be in you”. He has painted hundreds of such portraits, however, they may really only be variations of the same theme, different images of WOMAN – as demon, innocent, or femme fatale such as in the classic works of Edvard Munch.

From the darkness emerge luminous faces – stripped of the cloak of civilization – they have in them something primeval. Light can seem almost deathly – such as in a room filled with the flickering glow of a television. “Actually, I don’t know why my paintings are so dark,” explains Korszun, “Reaching back into my memory, I can say that I was sitting somewhere under a table, and all around me raged womanliness, at that time still completely inaccessible to me. Then I began to photograph these women from the television. The pictures came out dark like that.

I did not mind it then. I even think that I was glad on the inside. It sufficed. Now as for this dimming of my paintings, I think that it is the result of practical issues, first and foremost. This grayness is the color blue. Parisian blue, which I did use, simply dried too quickly, so I only used it to sketch the women, and later I applied only the glaze. Supposedly in ancient Egypt, sky blue was the color of death and not black. Maybe all of this somehow comes together… 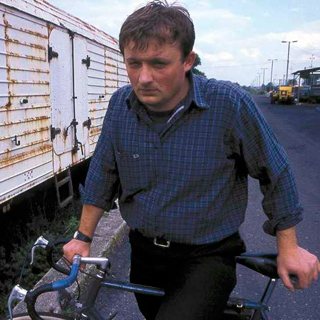 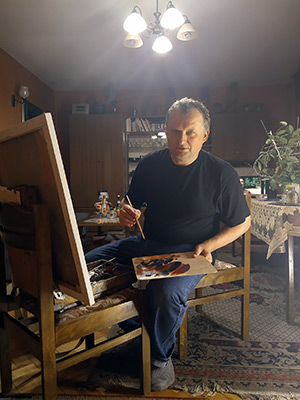