The tango as an excuse (I Met a Friend) 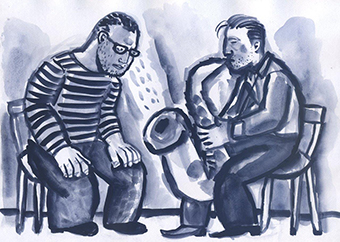 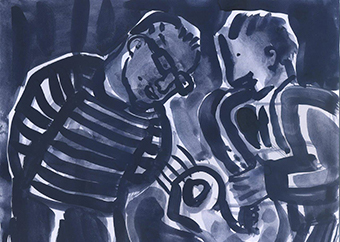 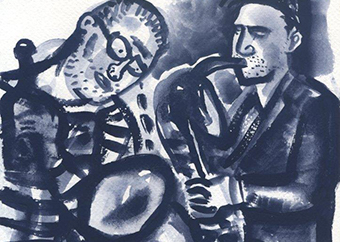 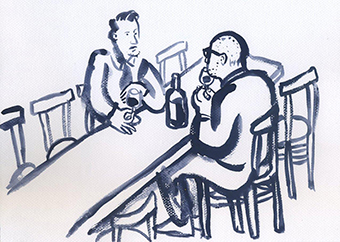 I Met a Friend

KK: The tango is a story that happens between two people, for a few minutes on the dance floor, and that may continue elsewhere. I’m no expert on the history of the tango and it was never my intention to paint that history. To me tango is about emotions. Either you feel them, carry them inside you, or you don’t. Like melodies: there are musicians who don’t compose tango music, but its power is inside them. Mateusz Pospieszalski immediately comes to mind. Mateusz and I have been working together on music videos and animated films for years. We have matched music to images and images to music. Mateusz’s music has in it the power of tango, its melodiousness, a certain harshness, a dance-like quality and a hint of nostalgia. In his music he uses colours that are characteristic of the tango. He doesn’t write tangos, he’s got tango inside him. And that suits me.

MP: Every musician knows what tango is; how could they not know? I don’t need to compose tango in order to feel it. I leave tango in its pure form to people who play it. But some elements of it seep into other music genres. When we speak of tango, we’re talking about emotions, about anticipation. Tango is suspended. It is played with held breath, a metre above the ground, among silence. This means it continues playing when the dancers stop and also when the sound stops. It means the emotion is sustained at a high level all the time. A knot in the stomach. Breathe in, breathe in; breathe in even more, building something up, to complete abandonment. On a stage this state of suspension is precious, unique. It affects the musicians and the audience. In a sense the silence becomes so intense that you have to think hard what tone you’re going to play next, because the pause resounds like a stretched string. And that’s what tango’s like, that’s how it works: it builds tension and holds it. At least that’s the way I feel it. My musician friends and I always say that on the stage during a concert there are moments when it seems the world is about to end: you already know you’re high above the ground or plunging head first. No matter: the only thing that matters is what is happening now, the moment, that feeling of tension.

KK: To me tango always means Tom Waits. His Tango Till They're Sore is a hands-free ride. “Well ya play that Tarantella / All the hounds they start to roar...” and then dancing, drinking, a moment of love – “ I'll tell you all my secrets / But I lie about my past”, despair and euphoria, wild abandon. “Let me fall out of the window with confetti in my hair...”

KK: When exploring the topic of tango for these paintings, I started researching its roots; I read the lyrics, I looked at dozens, hundreds of photos, films and concert videos on the internet. But that was a blind alley; it could have led only to flat illustration, the painted equivalent of an archive photograph. And that’s not what I’m trying to do. It doesn’t matter whether the musician in my picture has the correct instrument, the same one as in a photo from a club in Argentina. It doesn’t matter whether the woman in the painting has the right kind of heel on her slipper, and the man the right kind of period hat. It’s not about the veracity of the details, but about atmosphere and passion. They are playing with abandon and dancing with abandon.

KK: I found myself at my first milonga more than ten years ago, completely by accident. In Warsaw, next to cinema Muranów, there was a police casino, nicknamed “The Truncheon Club”. They had milongas there every week. To me that’s like a dance jam session. Many enthusiasts would go there; some knew how to dance already, others were just beginning, trying. The DJ played the music, and I just watched. It was a wonderful adventure. Imagine: he doesn’t know and she doesn’t know. They are strangers. He approaches her; he’s a bit too large, she’s tiny, and they’re going to dance, to draw figures on the floor, to wind around each other. Or: a plump, mature lady, full of energy. And a reserved gentleman, like a block of wood, with a moustache like the hands of an old clock. Everything about him is like an old clock: tick-tock, tick-tock. They dance. She’s already opening the world up to him, and he – tick-tock, tick-tock. It doesn’t matter that their efforts on the dance floor are very far from classical tango, that they don’t come anywhere near it. The tango is just an excuse for two people to meet.

The film “Our Last Tango” by German Kral tells the story of one of the best tango couples in the world. Today Maria Nieves and Juan Carlos Copes are both in their eighties. She says: “I’d fallen in love with him. That’s all. I wasn’t interested in the dance as much as in the person. But we danced more like this. Understand? Together.”

MP: Do you know that the pre-war hit “The Last Sunday” earned the nickname “suicide tango”? Friedwald’s lyrics were so poignant, Petersburski’s music so melancholy, the atmosphere of the whole piece such that tears came to your eyes. It was said that when an officer requested that song to be played, he would put a bullet through his head at the end. I think Jerzy Petersburski had composed one of the most beautiful tunes in the history of Polish music. Whole generations carried that tango of his inside them.

KK: You don’t have to travel to Buenos Aires to feel the tango. For me, it is associated with the 1970s and house parties, with fishbone parquet floors and marks made on the ceiling by popping champagne corks. In every flat you could find those marks, left over from New Year’s Eve festivities. Imagine: the record player is on, the men have already taken off their jackets, the women’s heels are making holes in the floor. The dance-floor horizon in the paintings comes from those memories.

KK: You can play, sing or paint the tango in so many different ways. An orthodox adherence to classic models makes no sense. But it’s good to have a springboard. I recently heard Penelope Cruz sing a tango in Almodovar’s film “Volver”. Actually, the performer is Estrella Morente, and Penelope is the face in the movie. It doesn’t matter who’s singing though; what matters is it’s beautiful. Morente’s interpretation of “Volver” is far removed from the style of the tango; it has a Gypsy, flamenco-like sound.

„To feel.. / that life is a gust of wind/ that twenty years are nothing / that a feverish gaze/ Seeks you and calls you by name / To live…/ With the soul bound / To a sweet memory / which I mourn again …” 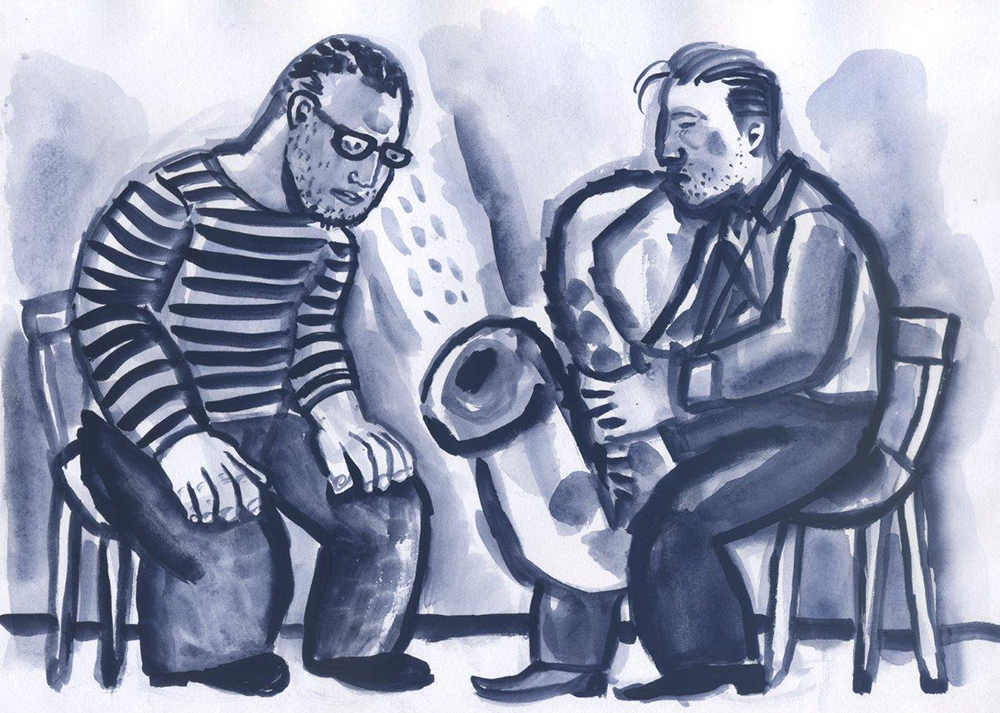 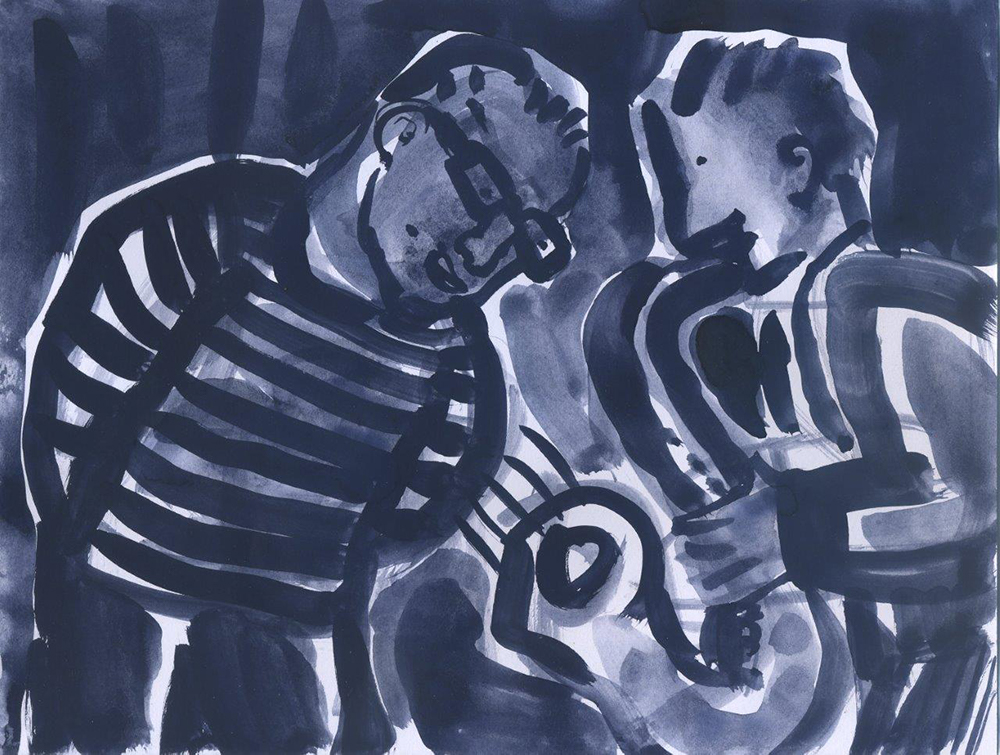 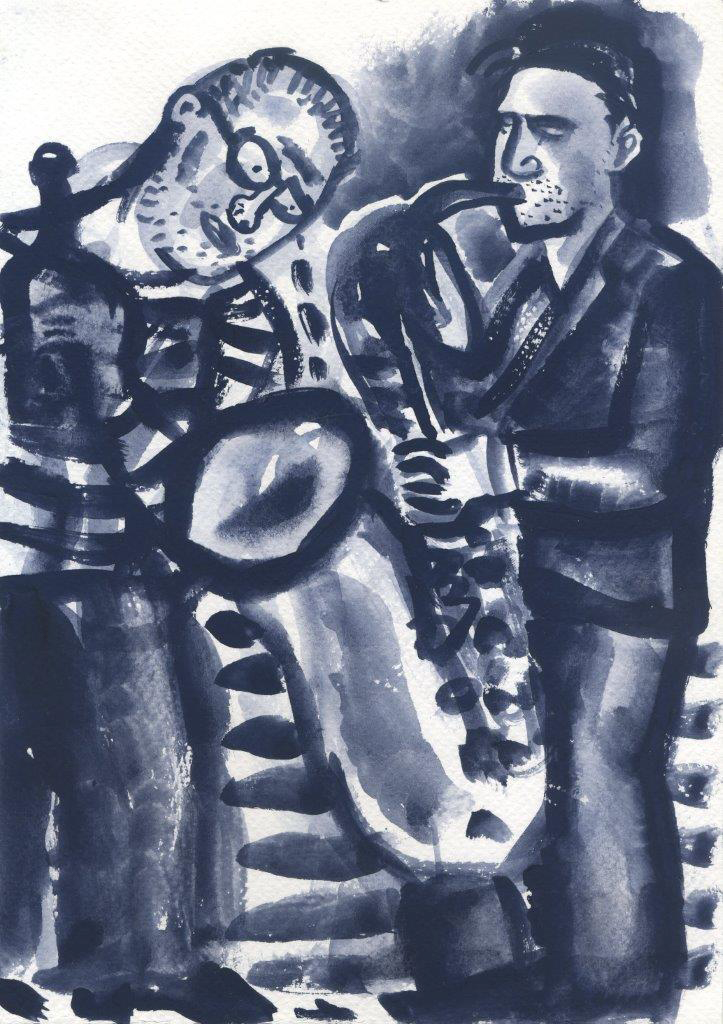 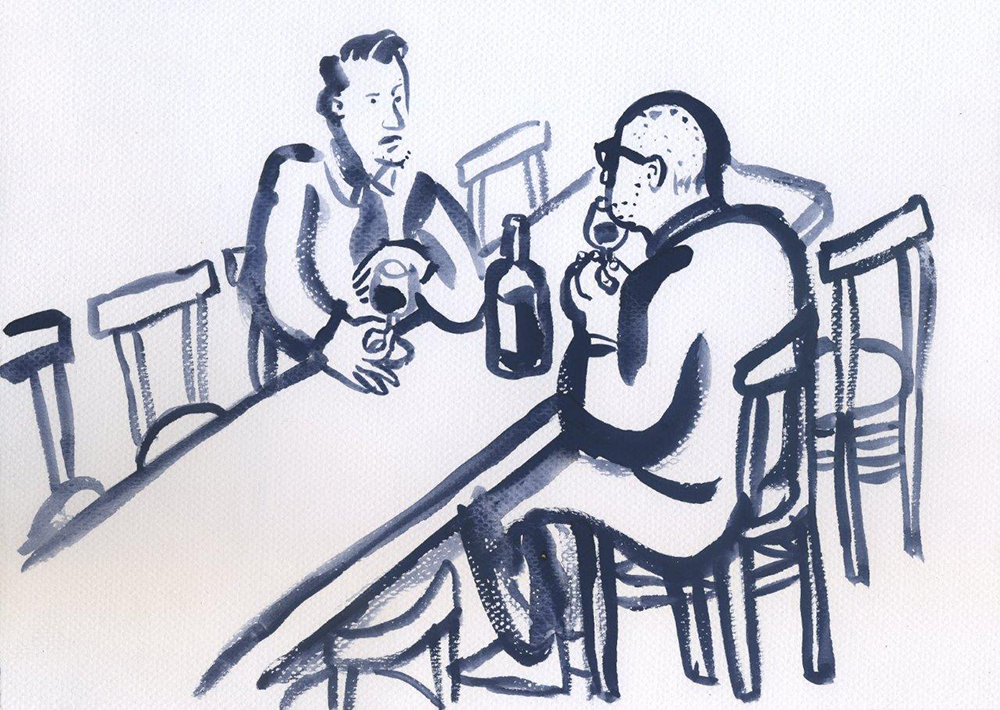