The tango as an excuse

The theme of this exhibition is the tango, the most sensuous dance in the world. Seductive, sexy, filled with desire and jealousy, a desire for power, the wish to dominate the partner but also a longing for love and intimacy. He and she, the story that unfolds between them on the dance floor for a few moments. The tango: a show performed by a woman and a man. Or perhaps – the tango: a metaphor for human life. An elaborate choreography, with all the bending, meeting and passing, with the partners perfectly harmonised; or a clumsy, amateurish dance, which just allows the couples to move around the dance floor together. 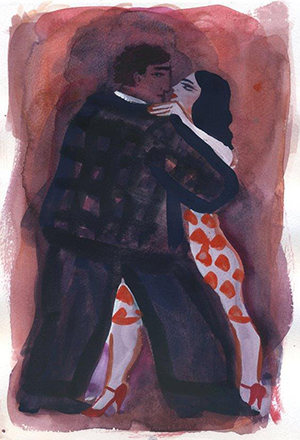 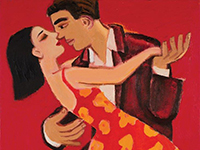 If we were to trace the history of the development of the tango, the way it looks today is light years away from its original form. That tango, born in Argentina, in Buenos Aires, in the barrios inhabited by poor people, crooks, sailors and prostitutes – that was sharper, more visceral, lascivious, lewd, with sudden pauses, turns and backbends. The tango was long considered an indecent, obscene, forbidden dance. It was said that there are tangos to suffer and tangos to kill. Only later, thanks to 1920s fashion and films, was the tango admitted into ballrooms. The bands changed too. Three, four men with bandoneons, playing intuitively, improvising, were replaced by a grand piano with a violin in counterpoint. Professional tango orchestras emerged, along with professional taxi dancers and dance schools. Some say that as tango gained elegance, it lost its true character. But that’s not the point of these reflections or of this exhibition. The tango is just an excuse, although it is also unquestionably the main theme. Kokoryn has approached the subject of tango methodically; he has studied its history, listened to music, looked at hundreds of old photographs. He could have painted illustrations for particular songs or Buenos Aires tales, stories from joints that smell of cigars, hair pomade, gin and overheated bodies. Fortunately, the painter’s temperament prevailed over that of the aspiring historian. For what is tango? An emotional bomb, a charge. A story of two people recorded in dance steps and music. For Kokoryn, tango is associated not so much with Buenos Aires as with house parties from the 1970s, music on vinyl records, the smell of hair spray.

Tango is just an excuse then: these paintings could have come into being without it just as well. Talking about Krzysztof Kokoryn’s art leads, almost immediately, to talking about music. Dancing couples, jazz players, various musicians, a record player in the corner, a pile of vinyl records – these are recurring motifs in his paintings. Silence doesn’t exist; you could easily find background music for each of the café scenes.

Kokoryn can’t imagine life without music, just as he can’t imagine life without painting. He’s been expressing that for years, not only in his paintings, but also through animated films and music videos. Hence the conversation about tango and the pictures in this show with his musician friend Mateusz Pospieszalski, with whom he often works, putting together sound and music. Krzysztof hears the melodious, dance-like and nostalgic sound of tango in Mateusz’s music. Pospieszalski sees himself in Kokoryn’s pictures: he indentifies with the painter’s representations of musicians, hears music in the intense, pure colours of thickly applied paint. The tango is just an excuse for a conversation: Kokoryn doesn’t paint tango nor does Pospieszalski compose it. But both have the power of tango inside them.