I am a busy man and don’t quite much socialise with others. So when I recognised my own self in a picture by Kokoryn, I was astonished. To get portrayed by Kokoryn has been a privilege o musicians, vagabonds, storytellers sitting around joints, or, young girls; at least this is what I always thought. 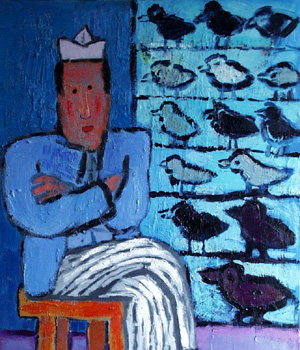 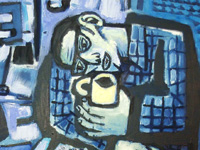 This time, the painter showed me as I hold a mug with hot coffee and lean toward a paper I look through. I look there as if I have drunk or read something that will give me wings in no time. I do have a soft spot for newspapers and coffee, the painter has watched it and masterly reflected it in his painting. This artist is gracious: it is only in his paintings that you can get saved through your addictions. And, by losing yourself in music, having a good time, or chattering.

The picturesque characters in the Kokoryn pictures are not some made-up phantoms. They are not portraits, either. This painter has elaborated his own method of creating such figures and spin his yarns. And he applies it, painting his pictures and making up characters for his animated pictures. When you press him strong enough, he would sometimes tell you who, in specific, might have been the archetype for that scenic red-haired guy snuggled into his guitar, or the blonde staring sweetly at him. Yet, it is not a realism, or painting a social chronicle, which is there at stake.

The effects of such a method are clearly visible. In this way, seductive pictures appear portraying the life of a homo ludens which may only be dreamed of by workaholics of our time who have to be there in the office Monday thru Friday, always on duty. A seducing arcadia in which we can only recognise the prompts from our normal surroundings: glasses’ frames, a dress, rows of bottles in a bar. All that is transformed, however. Objects purified of their neutrality.

Regular events, changed into a tale. We find ourselves inside a world free of concerns and boredom. The lucky dogs shown in some of those pictures can celebrate their everlasting festivity.