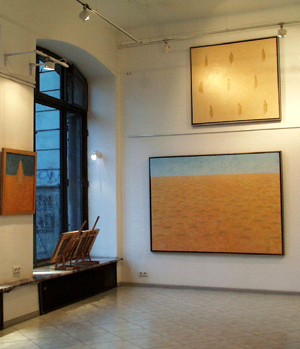 Although they are trivial activities, the characters in the pictures are very much involved in them. Their earnestness gives rise to a sense of irony; we feel that Mikolaj is winking at us.

Another time, when he makes little figures build an absurd pyramid in a desert landscape, we wonder whether he is assuming the role of a demiurge. Is he a director mocking his own characters or a prophet proclaiming the truth about us all? In the end, we face the question: what kind of issues does this art deal with? And who is the artist?

In comparison with our expectations, his own answer is very modest: My wife and I used to chase birds in the fields. First there's observation - observing motion, moving silhouettes - and only later does it lead to generalisation. Generally, Mikolaj is more interested in the workmanship of his Renaissance masters, and what he would most like to do is listen to operas all day long. So, Ladies and Gentlemen, if you seem to detect in these paintings a metaphor or symbol of your human condition, you do so at your own risk. Mikolaj accepts it rather unwillingly.

Since the time of Eduard Hopper, artists have shrunk from touching fundamental questions through painting. No one any longer believes that canvas can endure it and not break under the weight of meaning; that it is possible to be serious without being pompous. Mikolaj succeeds in it because he doesn’t dot all the i’s and cross all the t’s; he leaves open gates and does not resolve anything. He likes a state of incertitude; he offers more questions than answers, and warms up the bitter truth about life with irony.