Thoughtfulness is the essence of these paintings. All people, animals, and even objects seem to be thoughtful and dreamy. It’s not tiredness or laziness, but playing with time that is realistically unrealistic. What comes to mind here is the verses from the Aztec mythology:

‘But is it?,’ the paintings seems to be asking. ‘Since there is death, there must also be life. The shadow of passing is omnipresent, but it’s not a reason to feel anxiety. It can be tamed like a bear. The sleeping animals complement the sleepers and never look predatory – they appear to be mysterious instead. 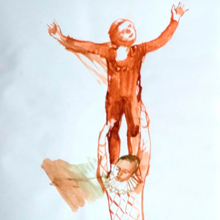 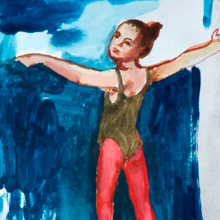 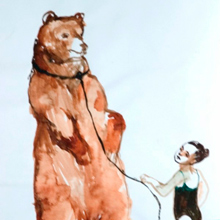 Katarzyna’s paintings form series – short but meaningful series. The reason to focus on a particular theme is always a human and the fascination with a human. What’s left to be done is to cast some light on the figures, immerse them in water, in the air, night or shadow. People drag an invisible veil behind them – it’s a hidden history of their lives and their memories.

The artist watches and observes people, in a kind and tender manner, as if she was saying: ‘I would like to understand you and capture the moment, so do not disappear so rapidly.’ They always do, however, for a while or forever. This results in the shadow of sorrow in her paintings.

In a letter to me, Katarzyna wrote:

Everything I paint must stem from affection, emotions, from passion, from recurring dreams. The paintings that are fictitious, sophisticated, first sketched and then transferred to canvas  never work for me. I must have an emotional reason to paint. Otherwise, I get bored (...) What interests me most is the atmosphere around a person and a short moment that may not be too meaningful, but is sensual.

The energy of emotions hidden in these words gives this art its power. And mystery dwells in these paintings, regardless of their main theme, which may be swimming pools, dancing, dreams or completely new circus scenes. Here, the mystery is probably hidden in time. And the time in the paintings has stopped or it’s the painter who stopped the time for a short while to have a good look at it. And she is reluctant to part from it, and especially to part with people. But what can you do when it’s time to go… 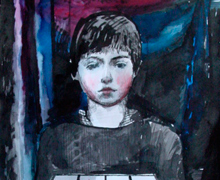 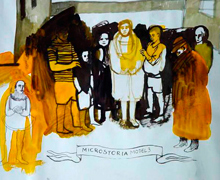 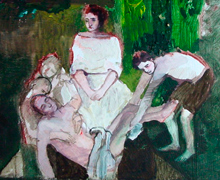 What strikes me is the quality of her skill and technique. As if recording the world in a drawing was just that easy. It should be put down to her family tradition I presume. Her mother, Anna Karpowicz, is a very good painter, while her father, Sławomir, was a truly outstanding artist. Although he died when she was only 16, he must have noticed how gifted she was. The early confirmation of her talent is her sketchbook – a recording of her father’s illness. He passed away on her birthday, which left a permanent mark on her art. It’s a feeling that every beginning is, at the same time, the end, and vice versa…

A separate chapter should be devoted to the way Katarzyna uses colour. She does it with moderate courage that gives her paintings a distinct atmosphere and tone, depending on the theme. She may be using colour in a frugal and well-considered manner, but once in a while she hits us with a much stronger accentuation.

Since her painting is based on a truly solid skill and technique, on the great tradition of fine arts, we can effortlessly find there different motifs and traces – the Renaissance, the metaphysical painting, the atmosphere of the works of Balthus and even Picasso as they both share well studied groups of figures and circus scenes. For that reason the landscape of these paintings sometimes seems to be the summary of all landscapes ever painted in the history of painting…

This art is divided into series. The themes are abandoned rather quickly, but in a natural manner, the same way the traveller’s landscape is changing. They aren’t fully exploited, but well-experienced. Passing away, they leave trails of memory that are later visible in next series.

The painter tours the world, revealing its luminous secrets and dark mysteries. Young, pretty, delicate and sensitive, but strong and fit at the same time – once she used to do a lot of swimming and climbing. And having so much energy, she likes taking risk in painting as well.

In conclusion, I would like to repeat what I once wrote thinking not only about Katarzyna Karpowicz: There is a reason to be glad and, thus, I am very glad that we again have a group of young painters with enough strength and courage to continue the great tradition of figurative painting. And they do so against commercialisation, fashion and critics.