I had a dream

I dreamt about a wild animal and it’s hard to say if it is good or evil. It is both, unpredictable. So far it’s been calm, it’s let me snuggle in its warm side and it’s lulled me to sleep with its peaceful, rhythmic breath. It’s been rocking and soothing me like that for quite a while. For years. 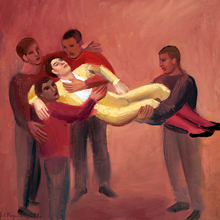 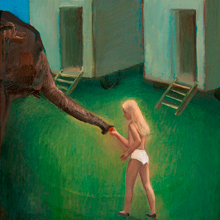 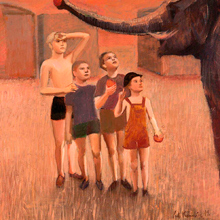 An atelier full of paintings – of life and dreams. No devising – intuition instead. There is no need to devise things as themes, since ideas just pop up on their own. And most often in sleep. Everyday life is reflected in dreams, and dreams can see themselves in the paintings.

So, maybe this story should be about the thing that a human sleeps and dreams together with their destiny. We live with ignorance of what fate is going to bring us, whether things are going to turn out good or bad for us. We have no idea if the lion will only purr gently and close its eyes, or if the bear’s eyes will sparkle angrily in the dark.

Curiosity, even obsession with destiny, the fragility of man and his fate. She paints what she has experienced herself, what still remains unhealed and has stuck deep inside, what fascinates and worries her in a dream. Because dreams aren’t always rose-coloured. They happen to be like deep water, a bottomless depth that suddenly goes dark. Like a murmur of the beast. Like walking along a thin rope.

I dreamt about a kitten – a friend, a mascot, a cuddly toy. It leaps across the frames of childhood, memories, fantasies, notepad pages, drawings of an elephant, tightrope walkers, Pierrots. It fawns on the time that passed. 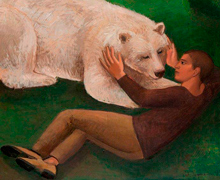 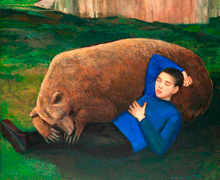 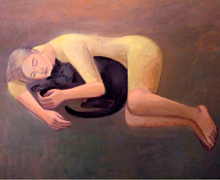 It was a clear, carefree time. The frames of childhood are lit up with the sun as if it had always been summer. Growing up in an artistic family, with painter parents, holidays in Szczebrzeszyn (the one from the tongue twister), her father’s hometown, the Kraków flat and atelier with a continuous procession of original visitors.

She draws non-stop and mainly using her imagination. She draws instead of playing. She won’t hang out with other kids, she won’t play hide and seek with them. She draws for herself – children dressed up as circus acrobats, scenes from the circus, tightrope walkers, harlequins. This has been her idea of fun. The circus artists will come back when she’s grown up. She is very fond of Picasso.

I dreamt about a bull. Rather harmless, since it falls for the matador’s dance. Its eyes fixed on the garish jacket, the golden embroidery – it’s having fun. A man and a bull in the dance of death.

Dreams charge the painting the same way the bull charges the matador and the matador charges the bull. Those men are so handsome, toned, well dressed – a very charming theme to paint. Cruel artists in love with their art. Their lack of self-reflection is shocking – the applause and the sense of victory come with the death of the terrified animal. The costume, the arena, the plaudit.

I dreamt about a sheet of water. Bottomless. A huge empty swimming pool – white tiles. The rhythm of the heart of a swimmer, a gesture of a hand moving across the wet face.

Apnoea, breathing out, breathing, the rhythm of arms and legs, a flight over the pool’s bottom. Regular rebounding off the walls of the swimming pool. The smell of chlorine on the skin, the scent of a lake, the salty taste of the sea. The time exclusively for oneself, the moments of concentration on one’s own breath, on the strength and weakness of one’s muscles, on one’s heartbeat that can be felt in the throat. Exhaustion changes into a metaphysical experience, loneliness is both attractive and painful, just like in Kieślowski’s films. Water brings solace. Could one possibly swim through life then?

I dreamt about a wild animal. Again, you know. A brown bear, a seemingly clumsy one. A tender guardian that conceals a beast within itself. Destiny is illusory. Sometimes it smells of fear, illness, death. It licks our hand like a loyal dog, but only to trick us. It’s got a long shadow, a huge one. The shadow that is a shelter or a trap.

The sketchbook has filled up with portraits of an emaciated man. She sits next to her ill father and draws him. He gets irritated at times, since he realises that he does not look too well, but his daughter is so eager to learn the technique of quick sketching that he eventually gives in. Once back from school, she spends afternoons with him, drawing him alone or with a cat. She isn’t yet aware that this is watching over someone who is actually dying. Obviously, she is waiting for him to recover. That’s what she is like. She won’t learn about certain things until she’s painted them. Only in her drawings can she see to what great extent her once strong and loving father has changed, how fragile he has suddenly become. Death came peacefully, frighteningly peacefully.

The girl sleeping under the starlit sky, nestling to the brown bear, is losing her trust in fate – she’s growing up.

I dreamt about… I always do…

In the painting only a part of the story can be told. It’s all about the feeling. 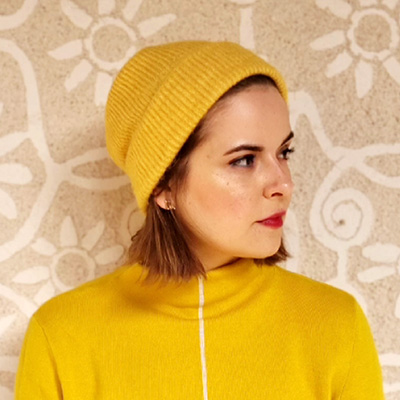 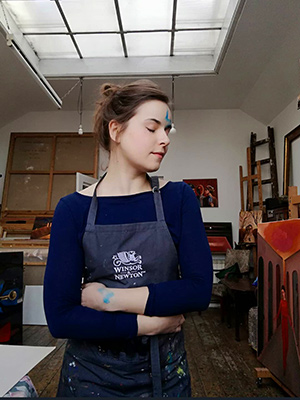