I remember that when I was a medicine student, my classmates and I dissected a human limb: I carefully separated skin from tissue with a scalpel to reveal a nerve, a vein or an artery. I took out a human heart from a container and carried it in my hands like a dead nestling. Then we would stoop over a wretched corpse to understand the source of an illness and learn to fight it. Knights errant, we were lost children clad in oversized lab coats, with funny caps and masks that we could not even tie properly. 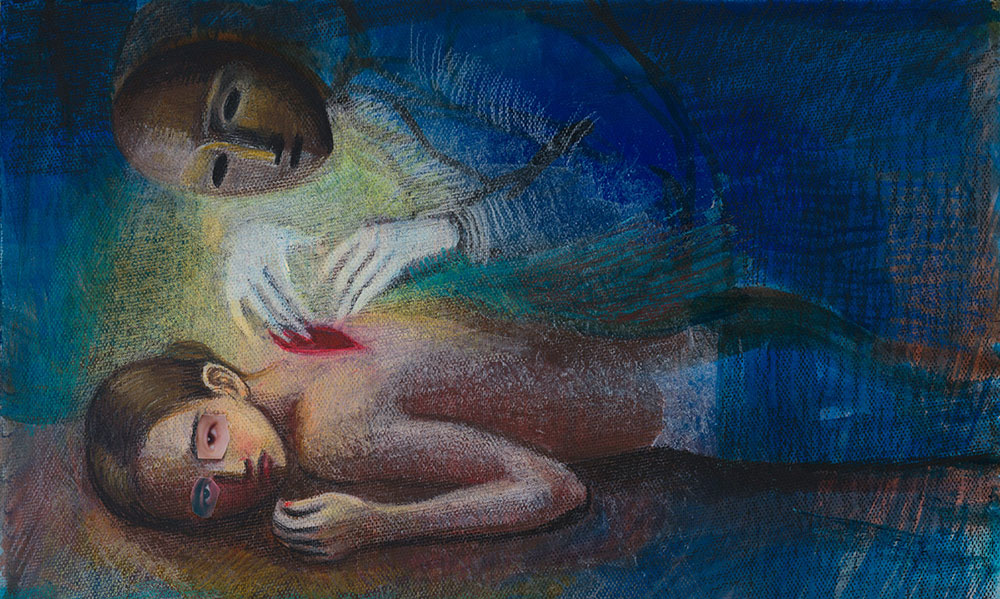 In the past causes of illnesses were read from dreams, animal entrails and bird flights, and amulets and talismans were believed to be cures. Once my brother gave me a small package wrapped in an old Bolivian newspaper and tied with a piece of thick colourful string. On removing the string and paper I saw four thin legs, a small thorax and a too large, birdlike head. The amulet, a dried llama foetus from a witch-doctor market in La Paz, was supposed to protect me against illness. Prof. Andrzej Szczeklik claimed, ‘Medicine and art come from one source; both originated from magic.’ Dr Wanda Błeńska, who treated lepers, wrote thus: ‘Nearly each of our patients, before coming to us, visited a shaman first (…). The locals believed leprosy to be caused by a curse or an evil spell, or to be a punishment for breaking a taboo; hence only a shaman could help (…). To lift the curse, two or three witch-doctors sat on a bench over a scapegoat cooking in a clay pot. If the clay pot broke, it meant that the curse could not be lifted; this, however, happened rarely since no one wanted to lose the sacrificed goat.’ 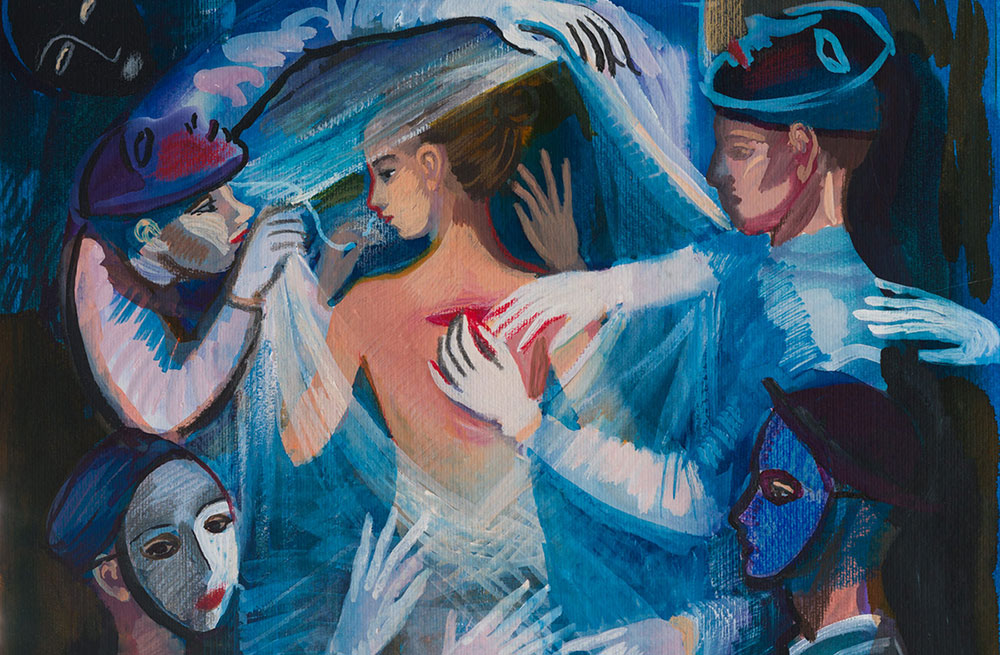 Physicians are not magicians. Physicians are people who listen and hold someone’s hand. At times they use poison as a medicine, at times they use a scalpel, chisel, needle and thread to repair and stitch together layers of the soul. They can often see death hatching, its eyes glowing at a patient’s bedside. They stand helpless like a scarecrow facing fearless, audacious birds. Dressed in a scarecrow’s rags and a bizarre hat, they stay put, refuse to walk away and hold the patient’s hand. 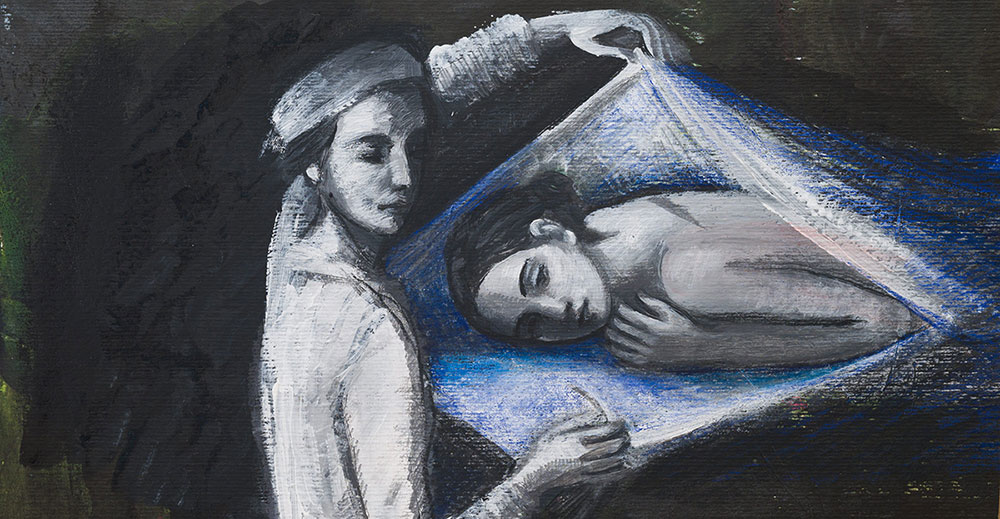 In the latest works by Katarzyna Karpowicz a physician appears to be a sensitive constructor and a delicate instrument tuner, though he sometimes changes into a masked agent (though never a killer). However, physicians are not the most important people here. Unwittingly, we empathise with an injured woman, we are interested in her experience and we feel her anxiety, sadness and fear. It is with her that we stay vigilant and dream of a safe space, take deep breaths and count the elapsing seconds. The artist’s powerful talent makes it truly impossible to remain indifferent to her small-sized images; they infect the memory and stay like afterimages on the retina after we close our eyes. The figure of a girl is covered with a sheer tent or sleeping bag, and someone is administering oxygen through a long tube – this is a myth-like scene and yet a very life-like one. Is this a facility for farming human bodies or sustaining life in the afterworld? How about this girl in an almost transparent white shirt, sitting with one knee bent, supporting her head with her right palm: is she having a bout of migraine or has she lost anyone? Near her is a man, a soothing ghost. The artist allows us viewers to create our own stories, guess at meanings, conjecture however we want. At times in the background one can discern colourful blots resembling traces of attempts at developing an image, conjuring figures out of nothingness and providing real frames to dreams. Allow me to add that these attempts are exceptionally successful. 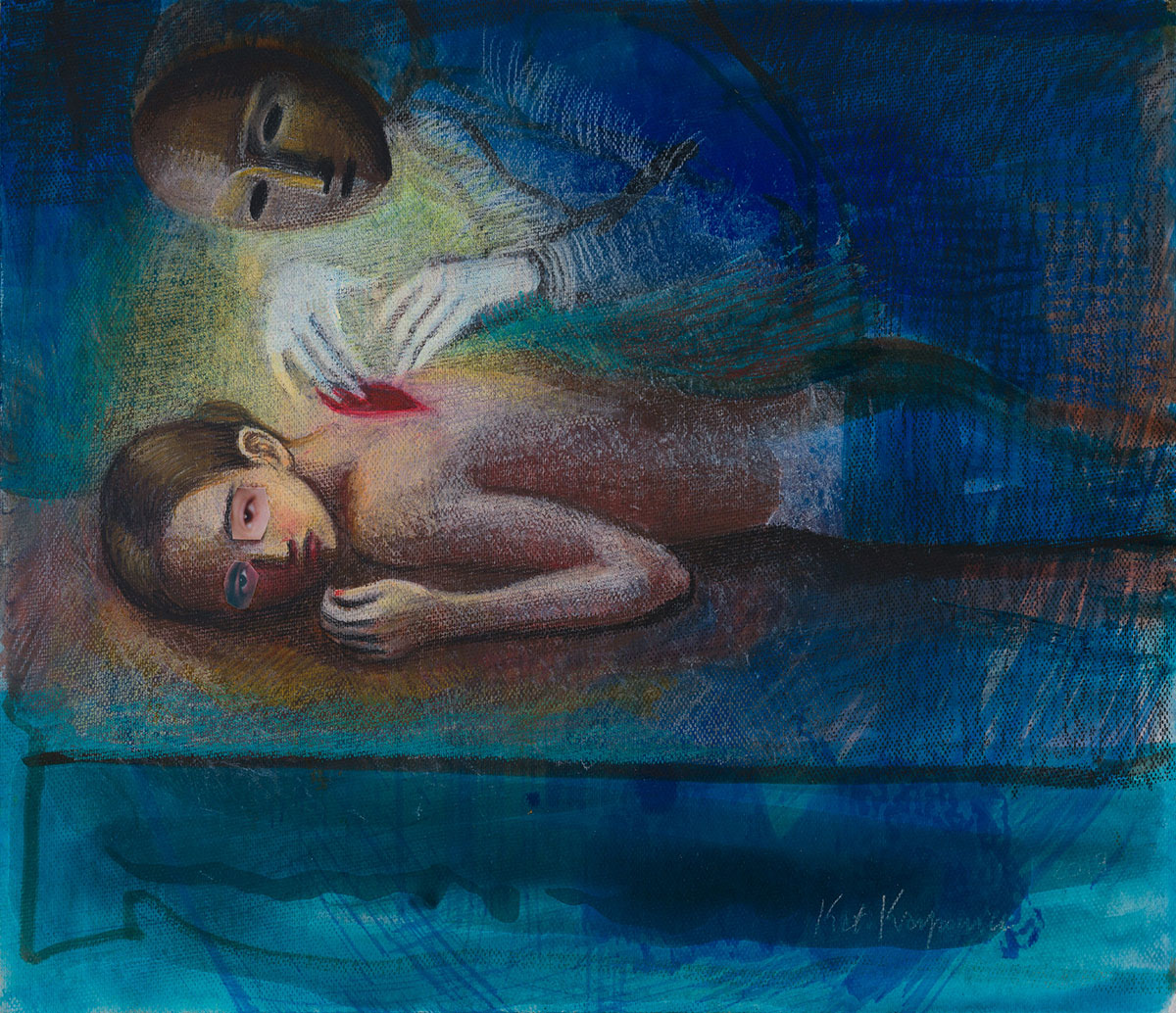 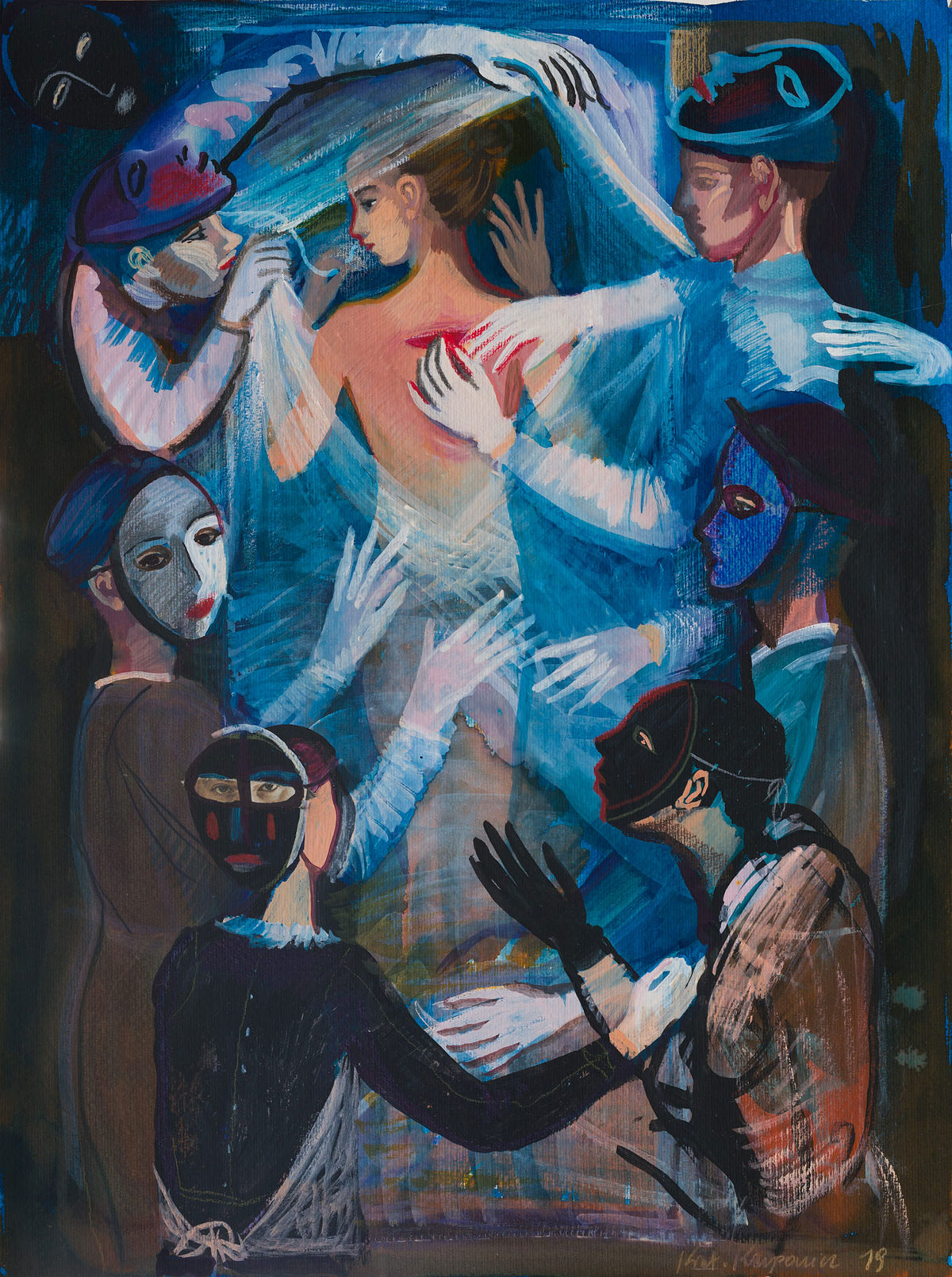 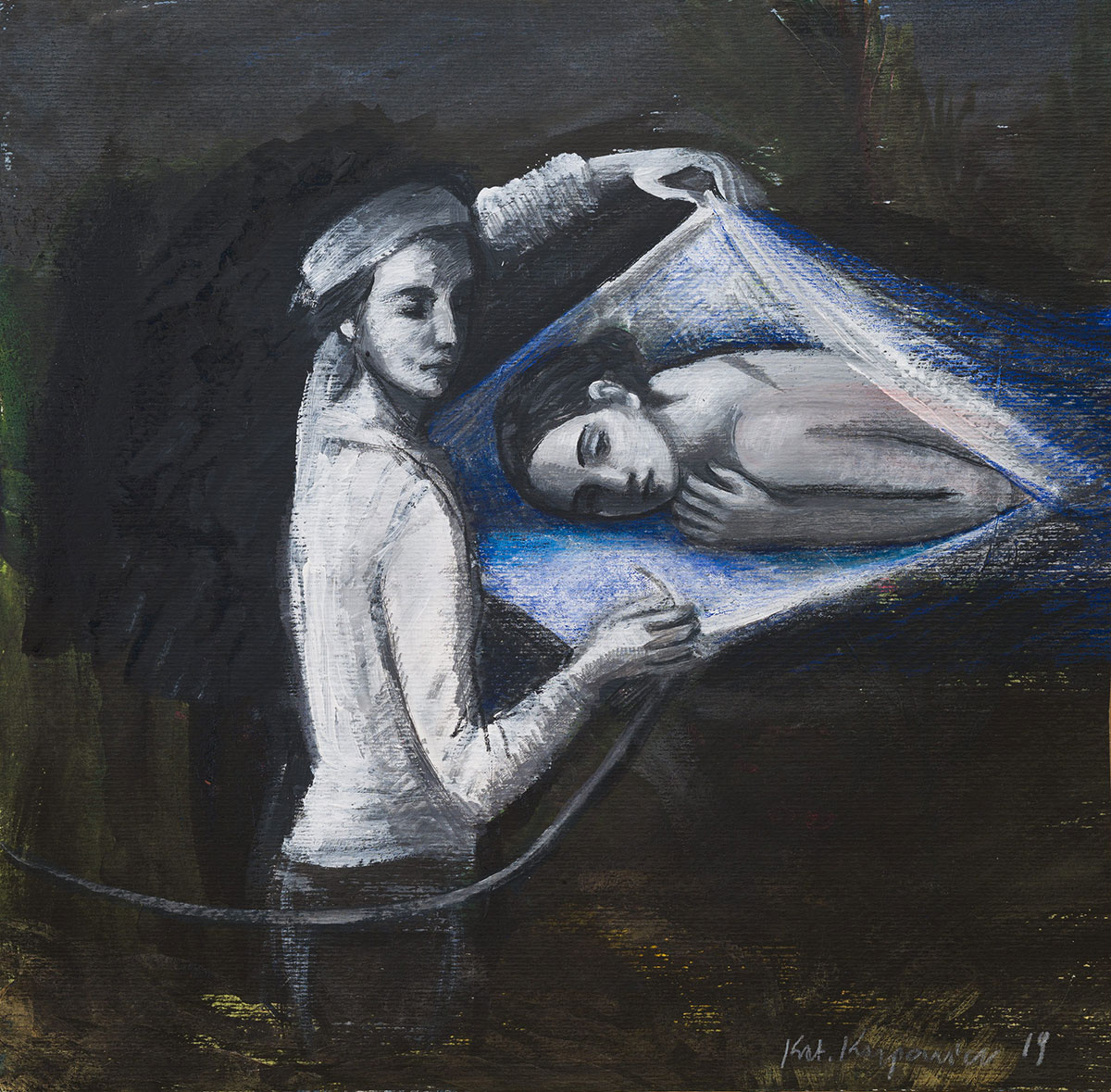