There's no such thing as progress in art

What does the past mean to you?

Long ago I came to the conclusion that progress in art is impossible in the sense in which it exists in exact sciences, because the aims of artists in the past and today are the same. The aims of art and the aims of human life do not change. Innovation or being different are not my priorities. The impression that I would like to leave the viewer with does not require avant-garde means.

Does that mean all the achievements of modernity are meaningless to you?

Of course not, but I do have a problem with things whose only virtue is their novelty. I have problems with objects adopted brought into the realm of art from other spheres of life, especially with those which mix the spheres life and art.

What you do turns to look towards the past, yet you do use the methods and achievements of contemporary painting.

We’re in the 21st century, there’s no escaping that; but I would like to avoid cheap flashiness. Effects should be a means in constructing the painting, not the only purpose of its existence. And even if I don't know what that purpose, that ultimate point of arrival, might be, means which go beyond traditional tools are there to enrich the painting, to build a more striking, deeper space. The textural effects I use are aimed at producing a clash of different spaces, at achieving on a flat surface what you once called “fingering”, an illusion of tangibility of the space created in a painting. I used to interpret it for myself something like this: that I use those means in order to capture the transitoriness of things, to show that all matter is heading for extinction, that it’s doomed to destruction.

So, if I understand you correctly, you’re trying to incorporate time in your paintings?

I suppose so, although I’m not sure that was my intention from the beginning. It used to be easier for me to explain it that way, and people found it very impressive. I’d like to add that I don’t make artificial cracks in my paintings; they are there because I’m usually not satisfied with a picture for a long time and I go beyond what’s technically correct, harassing the paint, putting on new layers, scraping off earlier ones, until this effect of a tired, worn painting occurs naturally. To me, the aesthetic result is more important than all the philosophy behind my work. The aesthetic impression is prior to what is later subject to interpretation. Those efforts and that dissatisfaction stem from certain specific aesthetic expectations.

You’re still a very young man, but tell me how it was at the beginning, when you were starting your very seriously intended work: whence that rigorous lack of colour, which only recently is being relaxed a little?

Indeed, I used to be very dogmatic and to stick rigidly to the principles I set myself. Now I allow myself more freedom, as I also know and can do more. It was a conscious decision which stemmed from the conviction that the intensity of colour is misleading, that subdued colours are more real, that they create an impression of tangibility. Intense, pure colour arouses my suspicions; it pushes towards the abstract and away from reality, reduces tactility and realness. Pure colours don’t really occur in nature.

Well, yes, exotic birds can be surprising. But the world of European flora and fauna is much less colourful. When you’re driving along a motorway you can notice how human creations stand out form the landscape, whether they are architectural clusters or billboards. You have the achromatic or semi-chromatic mass of the colours of nature, and suddenly there is a flat patch of pure colour, obviously an artificial thing. Now, also because I’m more conscious, I reflect more on the nature-culture dichotomy. I’ve started coming up with grey-brown planes, modelled through chiaroscuro, juxtaposed with colour ones that are as pure as possible. I still have problems with that, but I try to apply clear and luminous colours in flat splashes, so as not to model them after that.

When your paintings are being discussed, two names are often mentioned: Chardin and Morandi. Are they still the most important painters to you?

Now more than before. In the fifth year of secondary art school, while working on my diploma, I was consciously inspired by Morandi, and learned about the existence of Chardin. What I’ve always found appealing about both of them are their attempts at a phenomenological reduction of the world. Seeing ordinary, common, everyday things as abstract, strange, uncanny. Noticing what Miłosz once described in this way: “This is, although it might not be”; that it exists and that anything can be the source of a philosophical or metaphysical adventure.

Your paintings are usually horizontal. Is that orientation best suited to describing the world?

Absolutely – our eyes are set on a horizontal line. So even physiologically horizontal vision is more natural, and if you want to build compositions that are static, calm, quiet rather than dynamic and dramatic, it’s better to choose a horizontal format.

What you say would seem to suggest that you’re more interested in expressing the peace and permanence of things than transitoriness...

What delights me most about things is that they are there. Josif Brodsky wrote that "you can cast a thing away and it won't curse you." Things are patient, they are the perfect stoics, or embodiments of Buddhist philosophy, they are indifferent to everything that goes on around. A human represents the "vita activa", an object – "vita contemplativa". In those of my compositions which contain human figures it is often the human who is in violent motion. while architecture and objects remain strangely motionless. But active life is devoid of metaphysical reflection.

Writing about your most recent compositions I have dubbed them "predellas of the world" What is a predella to you?

A predella appeals to me because of its form. Especially in the early period, when I painted only still lives, I wanted everything to be very concentrated in time, condensed. One flash, one second represented in a painting; and predellas are different, they are a bit like cartoons, the historical and literary context is very important; I like their anachronic quality, with the same character appearing several times on the same board.

When I asked about predellas, I was thinking more about a certain hierarchy within a painting. The predella was below the post important representation in the main panel and added something to the saint's history. I have the impression that your works are like predellas to a main painting that still doesn't exist.

When we look today at those fourteenth or fifteenth-century compositions we see things in them that are bizarre, surrealist. They are like situations in the theatre or opera, on the border of life and the oneiric; we see things that are possible, but unusual. I'm now trying to construct my paintings like something on a stage, like a set. I maintain spatial logic, but I narrow things down, put in a little wall or something that will restrict the space of the painting like a theatrical set within which I'm trying to show the strangeness of reality.

What about the awkward bits in your paintings?

Probably most are just mistakes. I make corrections, but they don't always work. But also I can't stand pictures that are predictable, that's just not art to me. Things that can be tested, mathematically calculated, are just some tiresome string of causes and effects, and I look for and take delight in things that are unpredictable. I harass a painting, I alter it a lot, and I consider it finished not when everything is in its place but when I feel that "something".

Aren't you tempted to perfect a painting?

I am, but that tends to produce rather bad results. Sometimes I leave a painting alone even though I see a flaw in it, and sometimes it turns out that it needs to be flawed to retain internal consistency. Polishing the details often means that you have to start painting from scratch.

Your art changes as a result of your travels. What does travelling mean to you?

When I was younger and very serious about everything, I thought it wasn't necessary to travel. That you don't need to change your space-time parameters to make fantastic journeys. There are books for that. And then I had the opportunity to spend two months in Italy and it had an incredible impact on me, and certainly changed me and what I do for the better. What is outside us and around us can have a very strong influence on our internal experiences. You experience the art of the Italian trecento and quattrocento differently in an Italian scenery and in an art book. The intensity of those experiences cannot be compared.

I felt it even stronger in my work when after an unproductive period of repeating old motives and obvious tiredness and discouragement, I was inspired and gained new energy from travels and encountering art directly, in the places where it was created. Now I think I'll have to make more trips to renew and intensify my spiritual life.

We're talking on the day when you're travelling to New York. Should we expect dynamic, vertical paintings of skyscrapers after this one?

I've already done five vertical paintings recently, so who knows, maybe this tendency will be strengthened by the visit to New York. Maybe the clash between what I have liked best so far and the plastic, abstract, gaudy quality I associate with America will be a realization of the "vita activa / vita contemplativa" dichotomy. It might be a new stage in my art, which I'm looking forward to.

But there won't be that cultural context there, the landscape, the colours, the "naturalezza" that inspired you so much; you're going to a city of solely artificial creations.

Maybe that's the point, maybe something new will come out of it. I don't want to shut myself away in retrospection. I'm much more open to the new than I was even a few years ago. Actually, I can't wait for that encounter.

Doesn't your openness to America just come from the fear of being accused of inflexibility, of ossified attitudes that offer no prospect of development?

I'm always dissatisfied with myself. But striving for absolute, inhuman perfection is exhausting and I don't intend to struggle for it or to be as dogmatic as I used to be. I used to believe that this is what it should be like, that boredom and silence are beautiful and must be explored. Now I feel a natural need for change. Maybe in the future I will turn towards a white square on a white background, but right now I need ever more variety in my painting.

What journey are you looking forward to most?

I'll certainly always be happy to return to Italy. But some day I'd like to go to Japan, to encounter the purity and abstractness of that art in the place of its birth. 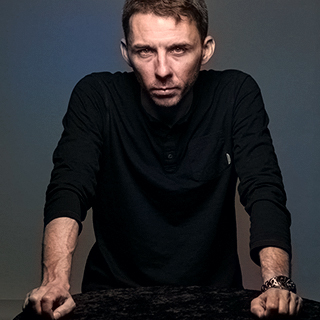 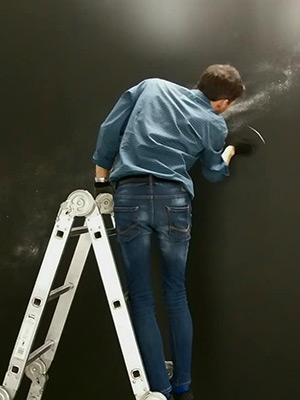