A private history of the war

The wartime photographs of a certain Jan Kotik, the Austrian-Hungarian subject we don’t know much about, the First World War goes on beyond the frame – noiselessly and bloodlessly. It is as if the ‘war as a giant slaughterhouse’ – as characterised by Maria Janion in her essay Wojna i forma [The war and the Form], and as later preserved by Henri Barbusse – has not started yet. None of those pictures would show us that ‘infinite monotony of misery, interspersed by horrific tragedies, at times’. Kotik follows the army, like the Szpieg z Krainy Deszczowców [‘The spy from the Land of Rainpeople’] cartoon character, somewhat at the back, beside the main front line. The course of his own war is leisurely, lazy, and quiet. At a straggler’s pace. He moves along the war’s margins, stopping at some non-heroic outskirts of little import from the standpoint of History: at a Hospital kitchen, Military canteen, Radiotelegraph operators’ school, or, The Staff Chancellery. 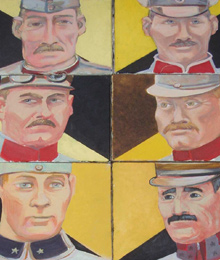 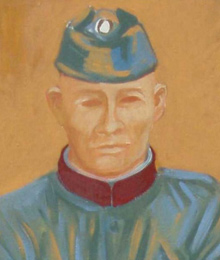 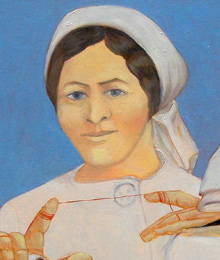 Kotik’s temper is one of an ethnographer and archivist. He is keen on taking pictures of humans. Indifferent to the ‘new architecture of the countryside bursting into flame’, he sets up his tripod firmly and with determination. He would stop in front of a Greek-Catholic orthodox church during the Easter; a peasant hut in a rural area in Albania; or, a Belgrade orphanage. That the time is rather unquiet, is only revealed by the supernumerary uniforms, omnipresent in those photos. Kotik’s photographic album, which through an Austrian collector and modern technology has landed in Bogna Gniazdowska’s atelier, is a grand portrait of ‘soldiers unknown’, sliced into pieces of episodes and subgroups. Unknown anonymous women are also present there: the Red Cross or Red Crescent sisters; secretaries or common peasant women wearing their galas, Sunday’s bests. As long as they do not play auxiliary parts in the war, as traditionally ascribed to them, they appear amongst those soldiers in a prevailingly ornamental function: emissaries of intimacy, of the more familiar gestures, affectations from outside of the battle drill register. Their appearance measures the time stolen from the war. This is why the sepia uniforms in Bogna Gniazdowska’s paintings appear colourful. The peasant women’s headscarves redden.

‘When I select an old photograph’, the painter says, ‘it makes me feel like I’m saving something; giving a chance to some, whilst taking it away from the others.’ Bogna does her selecting carefully. She first magnifies the anonymous heroes’ faces on her computer screen; then, she selects one or two figures out of a group portrait, and builds up a separate world for them, their own ‘micro-history’. She picks a Poet or a Stretcher Bearer out of the group of unknown faces. She offers new identities to the three women standing on a railway-station platform. The War Mothers is the name she attached to this portrait. What stands still within a Kotik’s frame – some scene, incidental meeting – has its continuation in Bogna’s painting. It gets plaited and goes on across the ‘grand narrative’, stops here and there and gapes, forgetting about the war. Caught by the convention, it gets arranged into a romance story, for that matter. There’s a he and a she. A military man and his secretary, so preserved by the war photographer. In Bogna’s picture, they act in a silent-film scene of sorts. The three nameless sisters, from a field hospital that is gone for more than a hundred years ago, eye us penetratingly: Clotho, Lachesis, and Athropos. In the painting called Courage, a peeped-at scene from a field kitchen assumes an elegiac pathos of a Caritas. Bogna’s ‘private theatre’ of the war is quite extensive, indeed.

Bogna is a passionate and acquisitive nostalgiac. She is a Past addict. She tracks the Past down, never letting it breathe afterwards. She makes scanned images of faded faces in abandoned pictures. She smoothens out the wrinkles. In her Warsaw atelier, full of stranger faces, she busily reconstructs relinquished genealogies.