Splashes of paint, explosions of colour. No motif, no plot, no architecture, neither sky nor earth, neither top nor bottom. Only pure abstraction and the sheer joy of painting. Edward Dwurnik as an abstractionist? The painter of towns and cities and their typical Polish ‘face’ – yes, we have all seen that before. For 50 years he has been functioning as such in our collective consciousness. For over a decade, however, apart from other thematic works, he has been creating a little-known series of abstract paintings. 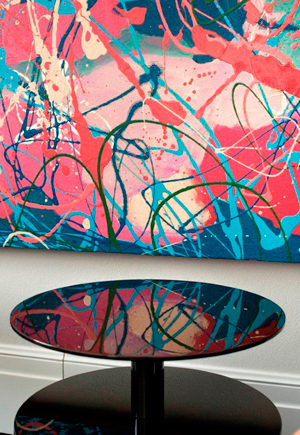 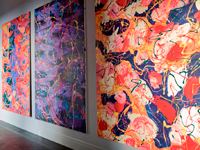 Series No 25 is the most mysterious project by Edward Dwurnik. Today he claims that abstraction is of the upmost importance and he calls it the liberation of painting. How come a mature painter feels a sudden urge to change direction? Where does this unexpected and unrestrained artistic gesture come from? ‘I painted sea waves, looking for consolation,’ says Dwurnik. ‘With time the stroke and line of the foamy waves simplified. But I preferred to follow Pollock than Tarasewicz and, thus, I started dripping and pouring paint in all possible directions.’ An elusive explanation, so typical of him. Bordering on manipulation perhaps. Only a truly self-assured artist, convinced of the purposefulness of his actions, admits that he has been inspired by another painter.

Dwurnik is a maximalist, so when he finally started dripping paint, he would really do it in all possible directions. He organized the world of the painting with real gusto, building a new matter, stretching canvas on enormous frames, dripping litres of colourful paint, whose blotches, tickles and streams created organic forms, a fabulous ornamental design. Not a single one of these paintings, however, is an amateurish imitation of Pollock. There is no instance of copying and only as much as necessary is left to chance, so the painter never loses control over his creation. Without his drawing or motif, Dwurnik is like a vibrating elan vital.

The majority of the exhibited paintings would not fit in your homes. The smallest canvases are of 2 metres in height and, thus, we could merely pack thirty eight of these in the 800 square metres of the exhibition hall. Series No 25 alone consists of over 300 paintings, most of which were painted within 6 years. That means almost 50 large-format canvases a year! And at the same time Edward Dwurnik was developing his other series of paintings.

Even though the paintings belonging to Series No 25 have been exhibited in such galleries as Kraków’s Bunkier Sztuki and Lublin’s Galeria Biała, they still remain virtually unknown to a wider audience, and our exhibition, which presents literally a fraction of the whole series, won’t change much in that matter. We stretched these canvases over the walls of an interior-design showroom and, by surrounding them with the best of international world-class design, we tamed and culturalised Dwurnik’s vigorous element.