Windows on the world. Why do you care so much?

On September 11th, 2001 when I was on my way to the post office with a bag full of invitations for Dwurnik’s exhibition opening I took a photo of myself as a memento. A couple of hours later it was obvious that I would remember this Tuesday forever anyway. 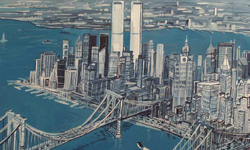 ‘My’ exhibition of Dwurnik’s early, student-era works was to be a small supplement to a huge retrospective exhibition of this Painter of the History, which had just opened in Zachęta. I had been trying to do it for a long time. I had wrested those unique pieces from the dark nooks and crannies of Dwurnik’s studio, fought for every watercolour, every drawing. And then, suddenly, when everything was ready and my art gallery-man’s dream was so close to come true the History knocked it out in few hours. What else, except for the images from the media, do I remember from that time? There was a question I was asked by Dwurnik: “Why do you care so much?” It sounded as if he sensed something, as if he was warning himself and me. Dwurnik is a painter equipped with an additional sense by means of which he can ‘see’ what is to happen. He appears to be a realist but in fact he is a historical painter and a prophetic one sometimes too. 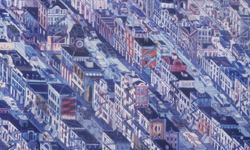 It is said that he can foresee events; just like in the famous martial law series he had painted half a year before the martial law was announced. He also can, before the others, formulate diagnoses and evaluations. When I was reading Windows on the World I was able to instantly realize that Dwurnik had already painted what Frederic Beigbeder described. Dwurnik reached the heart of the matter in a series of paintings about the WTC tragedy executed in a black oil paint on a white primer. Those are probably the most brutal of Dwurnik’s works and the evaluations they carry are so terrifying that not only the critics failed to mention them but also the artist himself hesitated at some point and withdrew them from the public viewings.

We slowly get used to the images we have seen on television, become indifferent, and fool ourselves that the History will stop. He has painted the heart of darkness and returned to painting towns. When I have recently gone to Łowicz and strolled through the town, instead of a map, I held in my hand Dwurnik’s drawings of it made almost forty years before. In that place nothing has changed. Do we live in a forgotten backwater? Or has the History been kind to us?