This time, there are no cities and towns, panoramas and views, people and figures; only the purest abstraction, frantic and splashed with the colours of the rainbow. That’s the essence of the latest Edward Dwurnik’s large-format paintings’ exhibition. 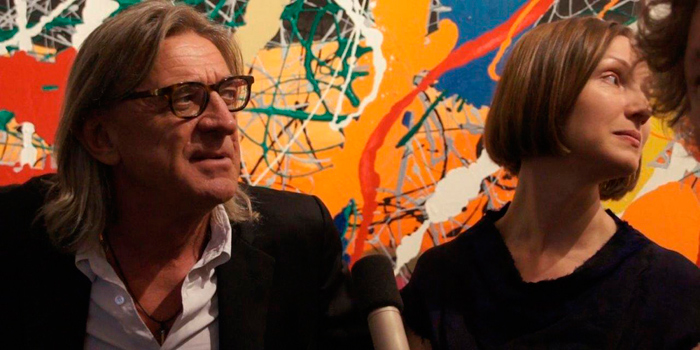 No content, narration, commentary or reflection of reality. No satire or even ironic wink. No martyrdom, politics or social rough-and-tumble. No Sigismund’s Column, St. Mary’s Basilica, Cracow Cloth Hall, communist politicians or left-wing journalists. No rhinos, giraffes, well-stacked women or men with coarse features and work-worn hands. In a nutshell: no topic, no motive. Only vibration of colours, only brushwork made of consecutive layers of paint – broad and narrow splatters, splashes, trickles, thin threads of a spider’s web, appropriating the painting’s space. Such Dwurnik’s works many still find baffling. But in fact, he has painted abstraction for over a decade, and, what is more, he believes that his works, from the very beginning, including the first urban landscapes, have been marked by underlying abstraction. 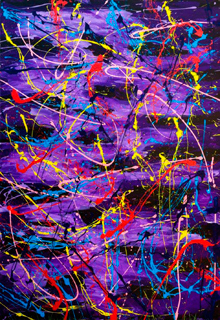 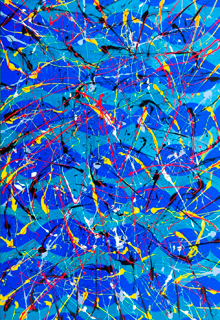 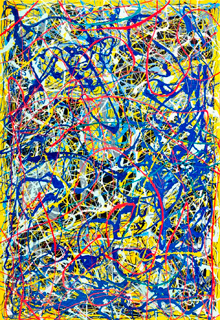 He began his career in the middle of the 60s with famous “Hitch-hiking Travels”, the series of paintings continued until today, that has already gone down in the Polish painting history.

Usually, Dwurnik closes his series; most often, he sums up a series of topical paintings with a big composition but painting landscapes of cities and towns is his “never-ending story”. He still enjoys working on them, this is why he never gives up on urban vedute. Another series continued by the artist is “Warsaw” series. The landscapes are painted in a manner that brings to mind Nikifor’s style. By the way, the discovery of works of the artist from Krynica dazzled Dwurnik by his way of seeing and capturing the world and showed him the direction and the possibilities of formal solutions still during his studies. “It’s true that I tried to paint like Nikifor at that time but it was merely a misleading impetus for finding [my] own path,” he says. 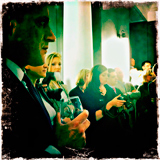 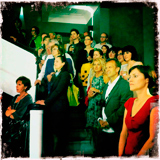 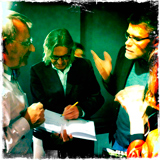 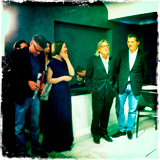 Over time, Dwurnik started to populate the pure architecture, he introduced people and animals into his paintings, started to show scenes from everyday life in Poland of that time and represent the reality, like in “Sportsmen”, “Workers”, “The Way to the East” or “From December to June” series. Dwurnik doesn’t transfer the content, the literature into the painting, instead, he captures the reality and portrays circumstances. In his episodic work, he can smoothly change the topics, and covers both, the abstraction and the historic and critical art. Everything depends on what he focuses on at a given moment. A painting is his glance, his reception of the world and mental shortcut.

Coming back to the question of abstraction and its beginnings in Edward Dwurnik’s painting, it is possible to refer, as the artist suggests, to the first works from “Hitch-hiking Travel” series. “(…) actually, I always wanted to paint abstract paintings,” he said in the interview given to Anna Maria Potocka, on the occasion of “Thanks to Jackson” exhibition displayed in Bunkier Sztuki in Cracow in 2005. “Anyway, my first paintings from “Hitch-hiking Travel” series are almost abstract, precisely conceived, evenly saturated. Now, when I saturate abstract paintings, when I spray them and paint them, when I spill paint on them, I come back to those first paintings, although today, it’s much easier, because I don’t feel that tension, that obligation to tell a story, to be engaged in a just cause”. The artist also believes that reducing many urban landscapes, bristling with buildings and figures to a microscale would result in abstract compositions, a maze of lines and dots.

Abstract thinking was already revealed in the sky-blue paintings from the 90s. They were almost a hundred canvases depicting the sea. They balanced between realism and non-figurative art, with the predominance of the first one: sheets of water, surfs, register composition and colour scheme developed around blue hues, with white, green and yellow touches. The motive was recognisable and transparent, but one step was enough to reduce it all to an abstract sign. The same applies to many landscapes of the artist – a stain of blue water and yellow beach, of bloodred poppies, tulips, trees. Sometimes it’s more organic, sometimes – more geometric. But only the paintings of “Series XXV” are deeply studied and total abstractions.

Dwurnik takes his time searching for some motives and concepts. He claims he first had to learn and experience a lot in order to take up painting female nudes. It was similar in the case of abstraction – only with time he started to understand its value. “The abstraction is extremely important. I am feeling it more and more vividly. It is culmination, liberation of painting. Yet abstraction demands an impulse of life, a real environment,” he says.

The paintings from “Series XXV” were partly inspired by Jackson Pollock’s works. Partly, because Dwurnik borrowed from him the methods of work consisting of pouring paint on a canvas. However, as in the case of following Nikifor’s style, it was “merely a misleading impetus for finding [his] own path”. Pollock’s painting is characterised by the magnitude of tragedy and metaphysics; the scale and every element of his canvases have an organic function. What matters in Dwurnik’s paintings is decorativeness, pleasure and delight taken in the act painting. He often works on finished paintings, modifies his own or other people’s canvases, treating them like underpaintings. From under the streams of paint, cities and figures can be seen. These abstractions are like an explosion of hues or colourful cacophony, but there are also compositions of soft or monochromatic colours. Before, the artist often ignored the meaning of colours and the possibility of playing with them, now, he aligns them together and enjoys them. Some of his paintings has a well-studied, calm rhythm, while others are full of expression and vehemence of a gesture. However, the artist does not lose control over the creative process. Despite the references to Pollock, critics find in his work the echo of European Tachisme rather than American action painting. One thing is certain: when liberated from any motive, Edward Dwurnik becomes a fulfilled artist.

He says, he always wants “a painting to hide a mystery, charm, magic, to have an impact and allow contact. It is perfectly visible in abstractions, as these paintings take place only in a sphere of sensations and emotions, they don’t tell stories; there is no narration, absorbing and distracting a piece of art. In abstract painting there is only a picture, das Bild”. Dwurnik’s large-format abstract compositions need space, only then they can be fully seen, apprehended and experienced. 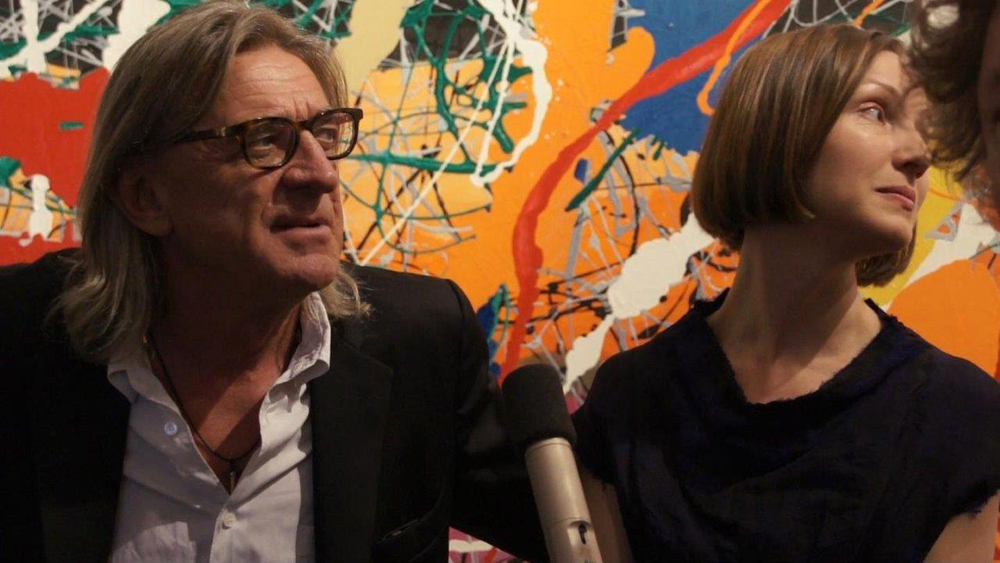 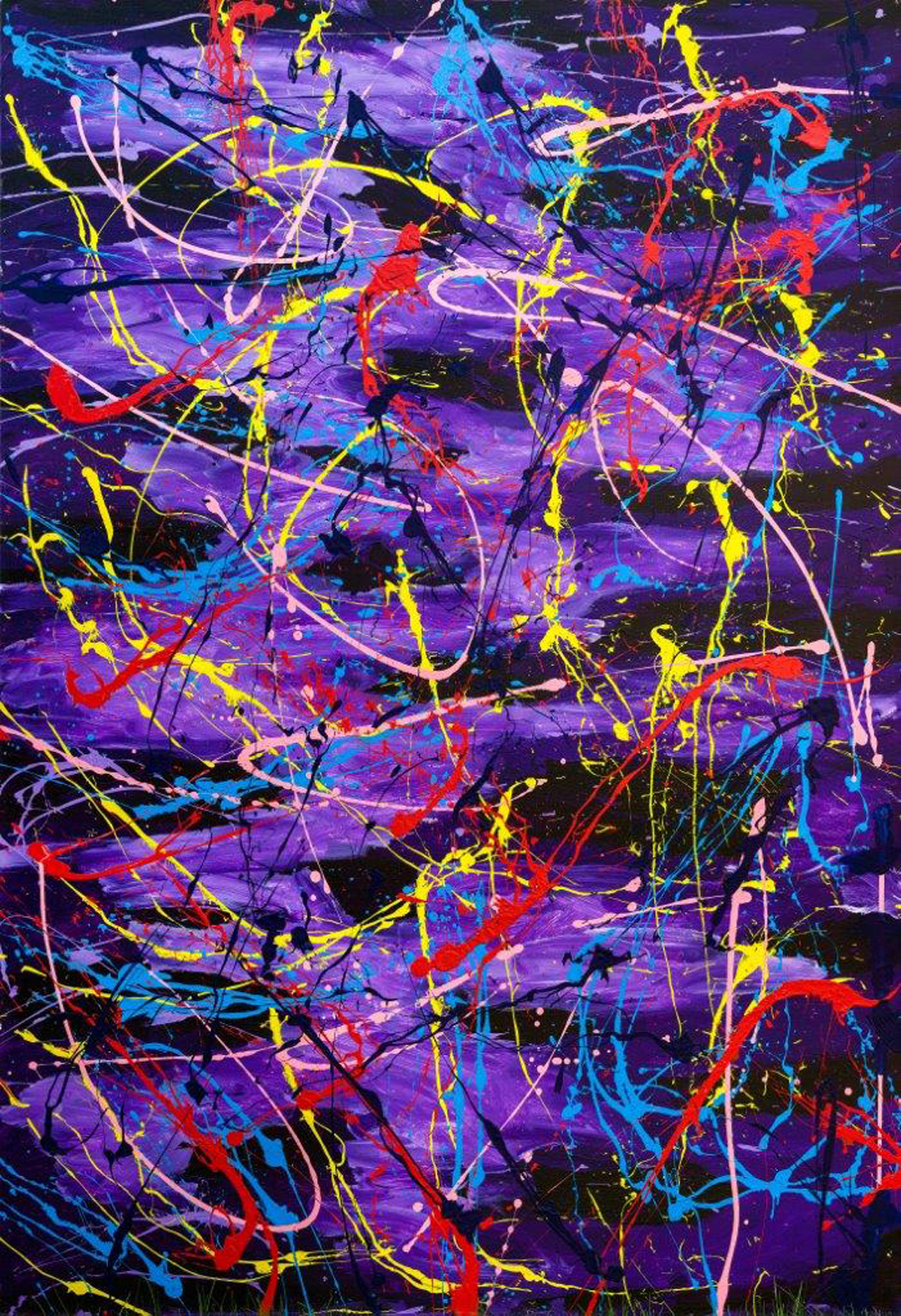 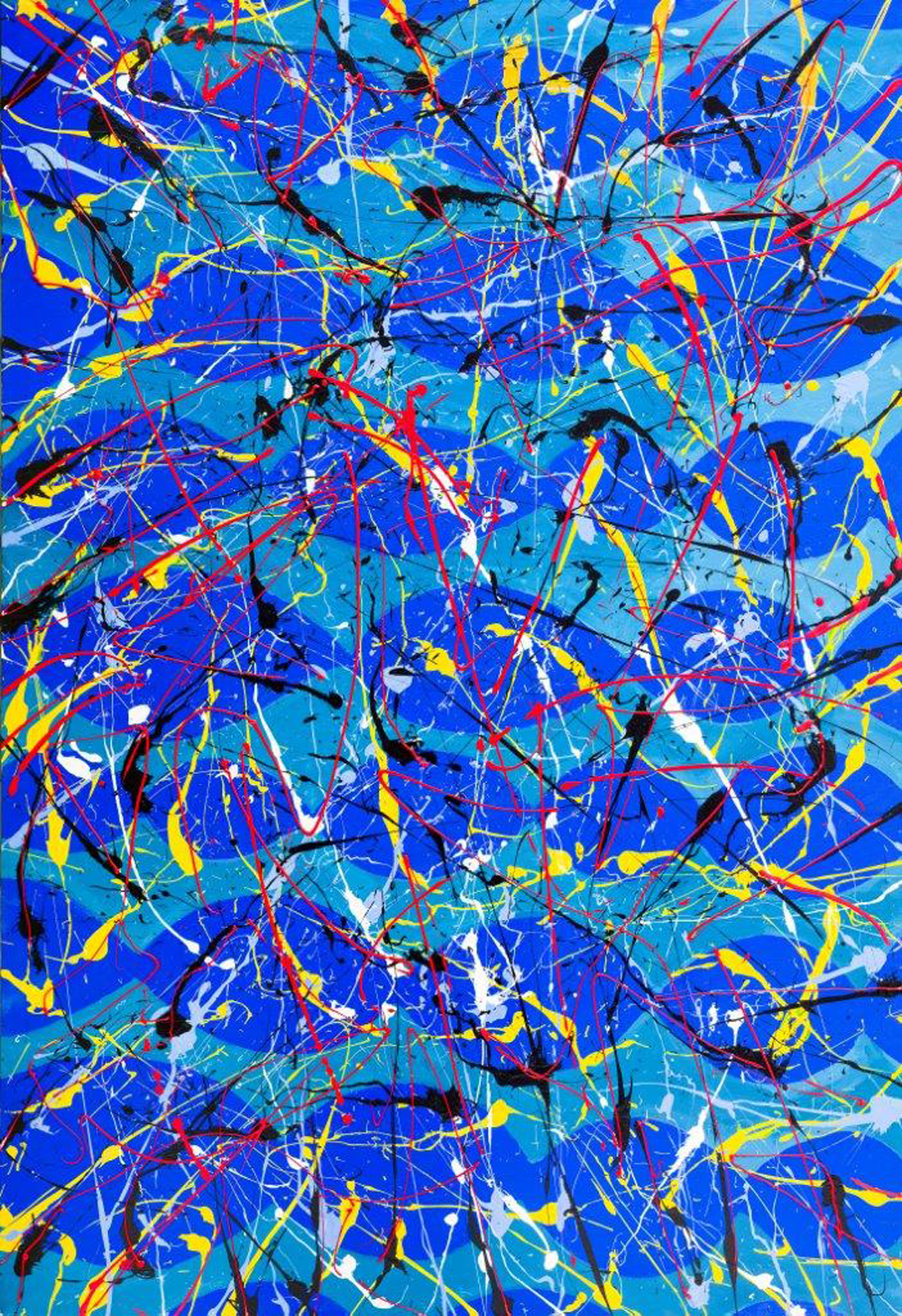 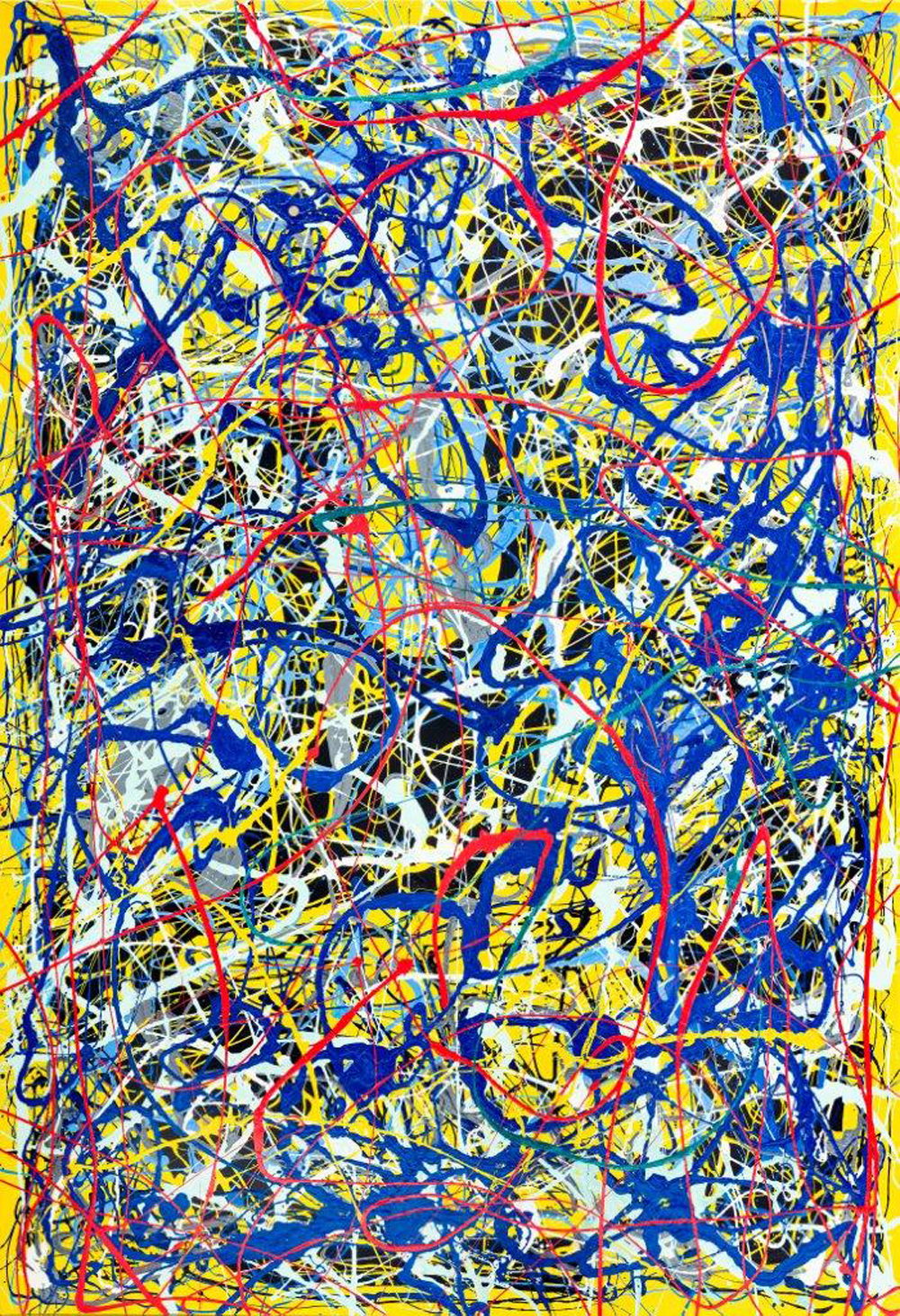 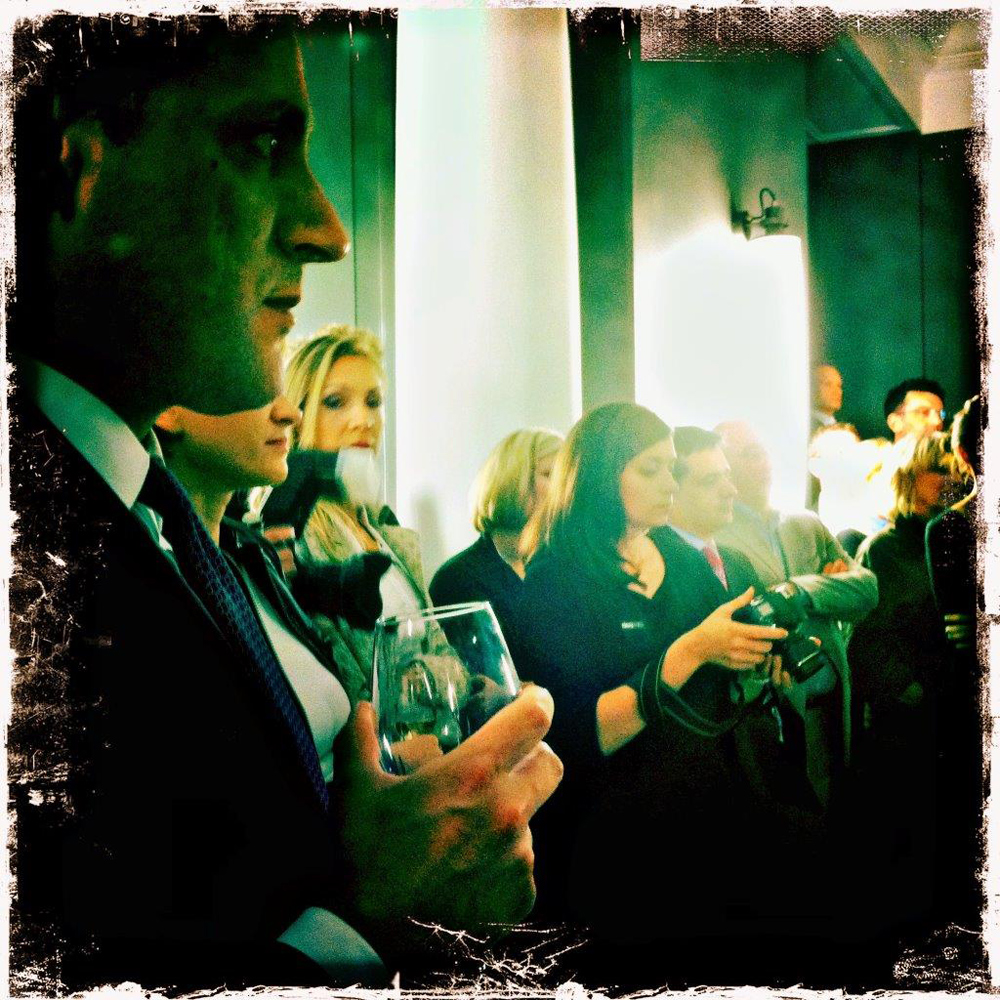 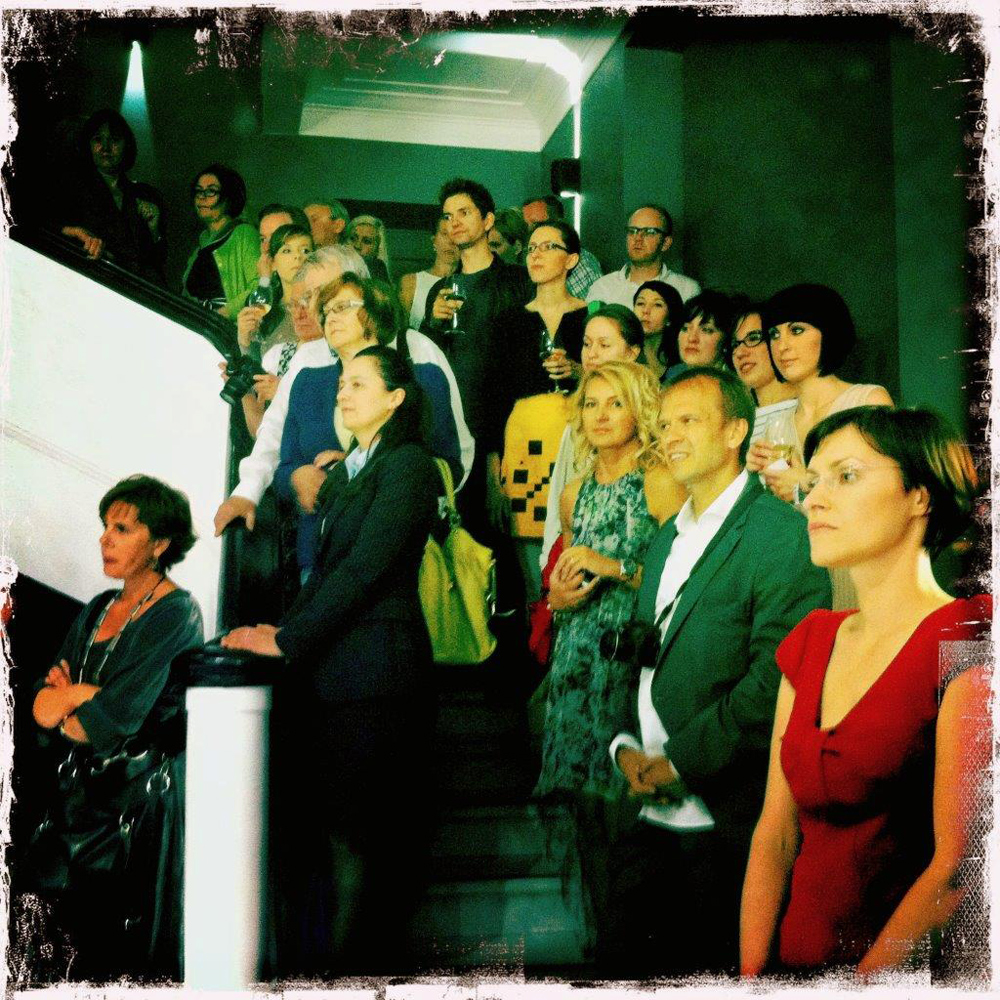 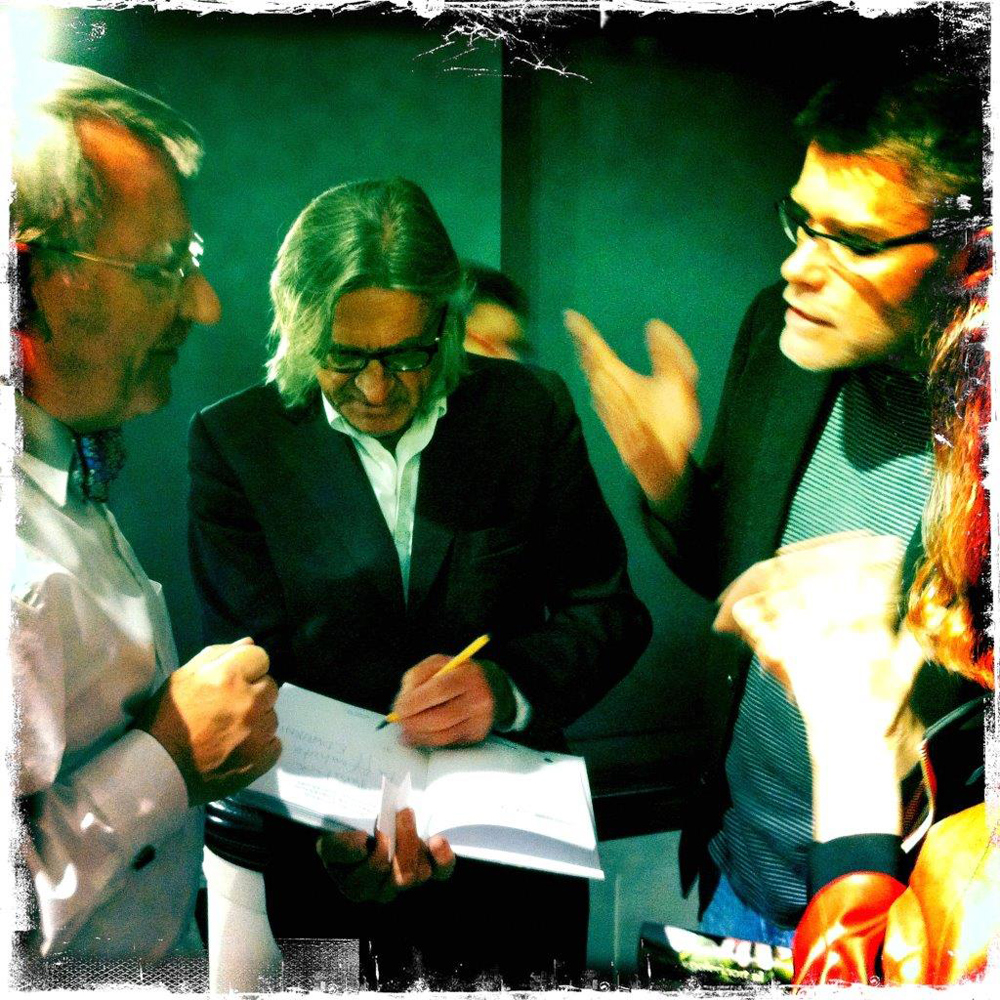 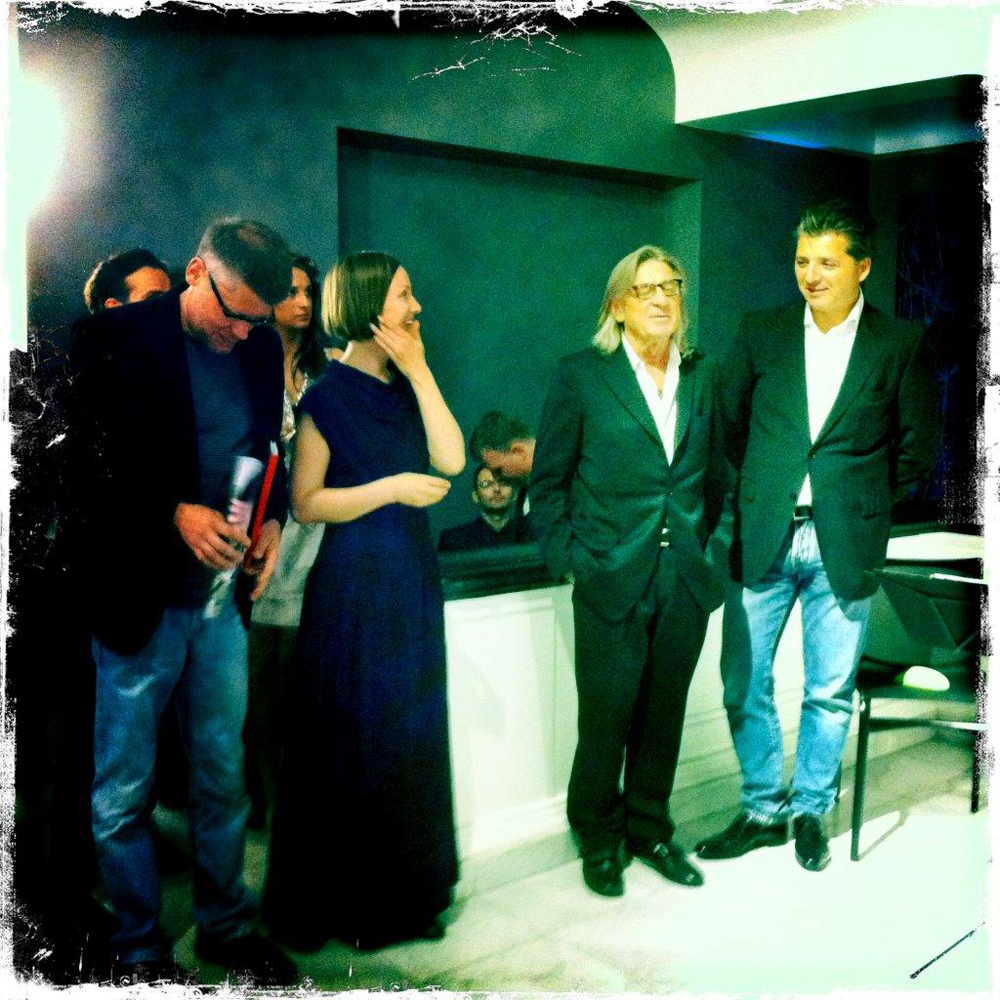 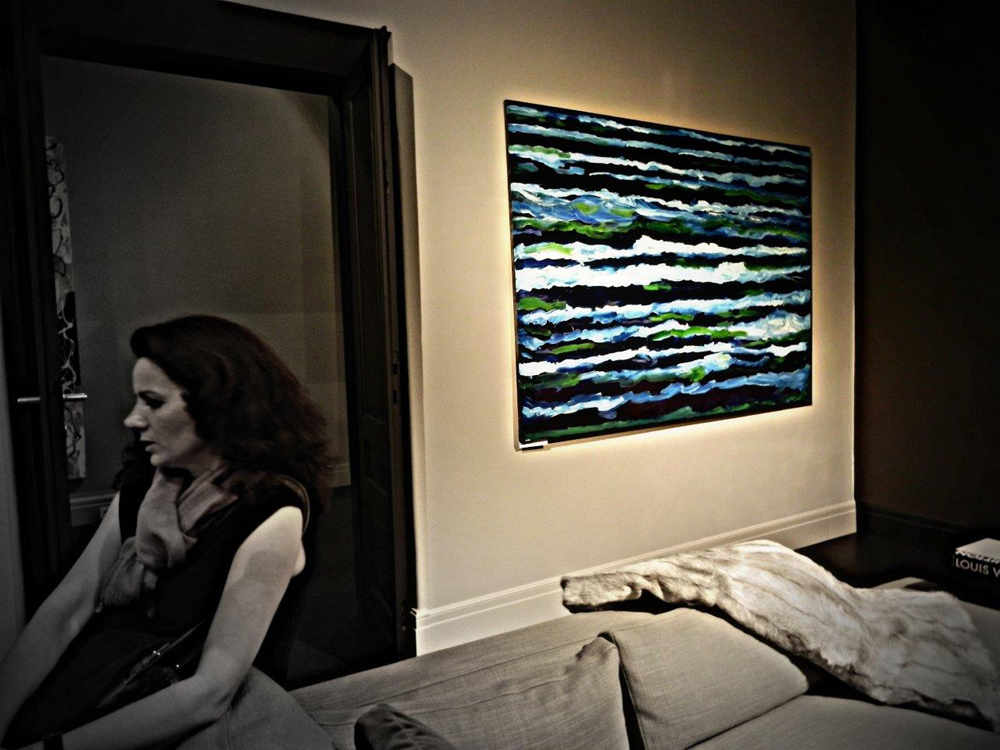 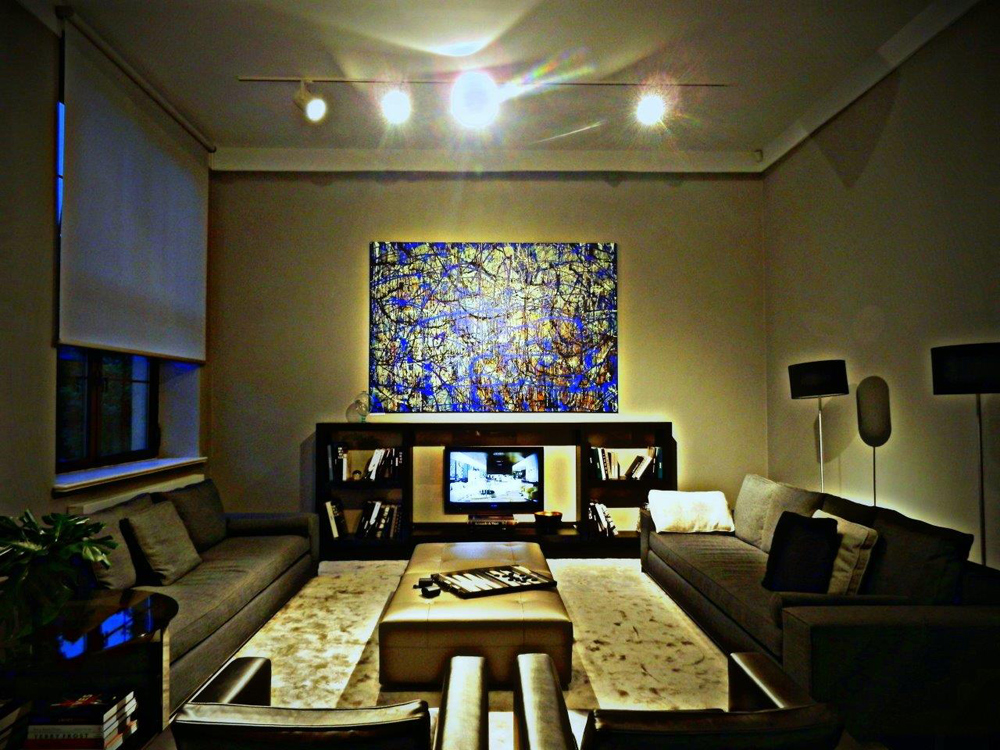 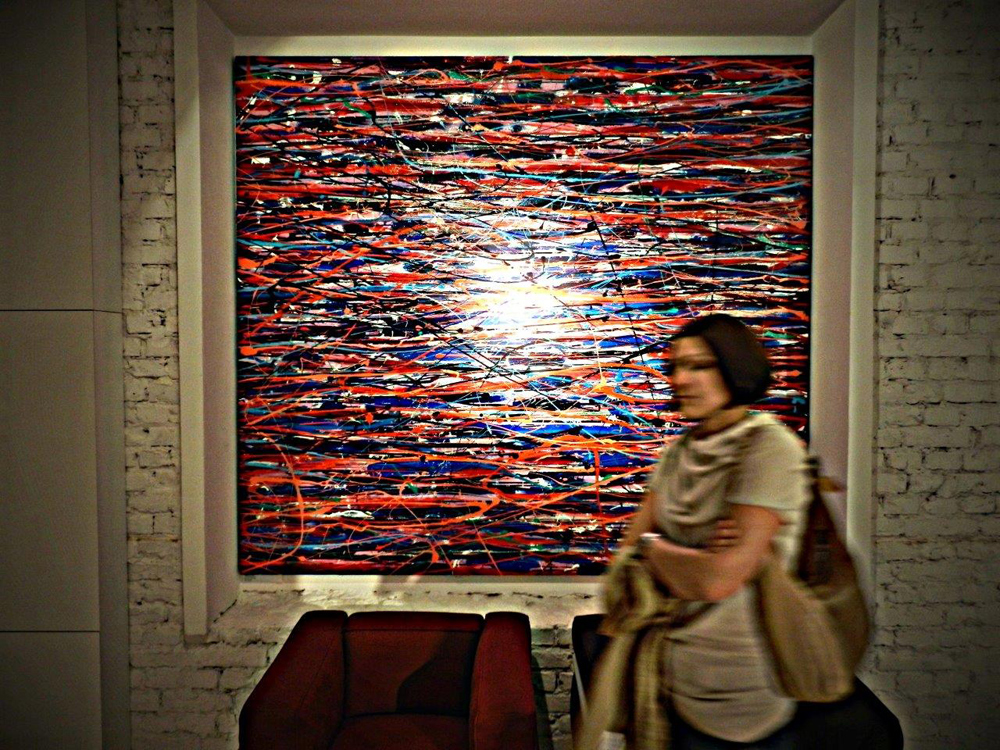 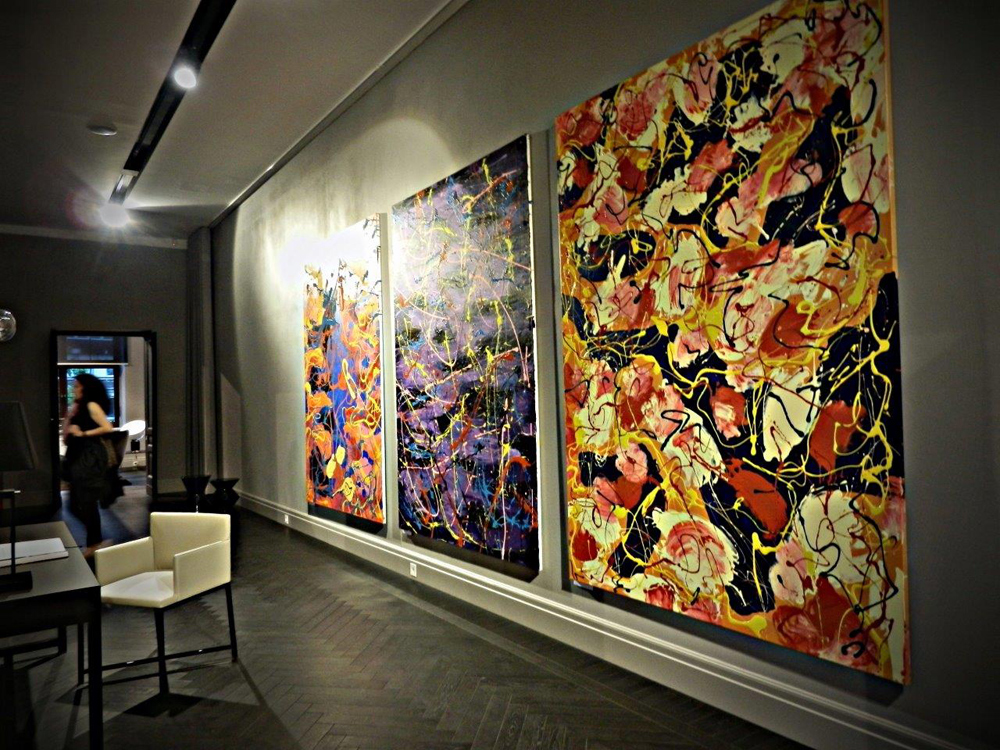 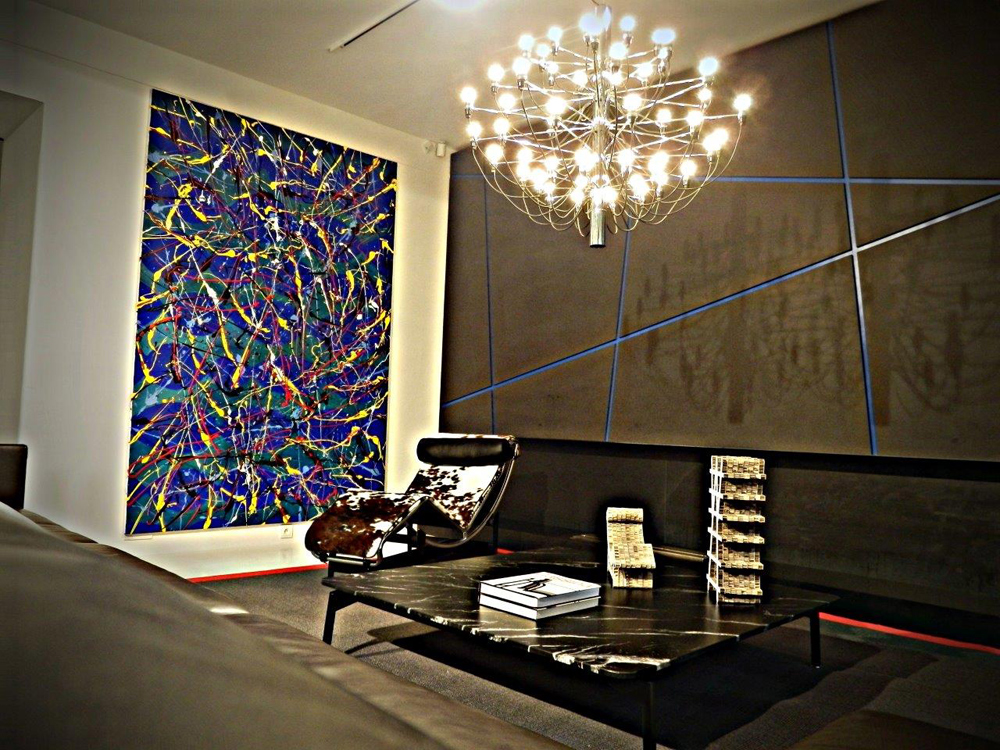