Stories without time or place

The preparation of a plate for mezzotint requires painstaking work. It can last as much as two days. First the plate must be covered by an even mesh of burred dots, cut at different angles. This is done with a special tool, called a rocker. A burred surface with dots and flakes is obtained. Only now does the main part of the job begin. The burrs have to be scraped off with a lancet, with great precision. Few artists practice this arduous technique, in which Maciej Deja has attained to perfection. He has received many awards for his prints, including the special award at the Tokyo International Mini-Print Triennial and the prize of the Rector of the Academy of Fine Arts in the Warsaw Graphic Arts competition.

A human body emerging from blackness.

'The whole structure, the anatomy, muscle and bone, is the basis for me to start from,' Deja says. 'without any additional literature, no houses, landscapes, unnecessary furnishings.'

The muscular human figures from Deja's prints come into daylight in his paintings. The muscles gain colours - reds and browns.

- I am fascinated by people assuming 'non-civilized' postures: children in a sand-box, an Indian crouching on sand - there's something natural, animal, ape-like about them. It's difficult to imagine, for example, a guy in a pin-stripe suit sitting in that way. In geographic and natural history films we see whole tribes where that's natural. In my works I leave aside the whole ethnology, what is left is pure gesture.

Print - man with a spear

- I used to have an obsession about 'warriors', men represented in the simplest gestures: holding, carrying, walking.

- My prints are stories without time or place. The figures have no clothes, which would have to be associated with the 70s, the 80s etc.; they are bald. The gesture in which they have been captured becomes more legible then.

- Some gestures, when performed by particular people, have a ritual, even mystical sense, for example the gesture of an Orthodox priest CARRYING an icon. I paint the gesture without the cultural setting, trying not to deprive it of its sacred message.

Painting - rectangle with a figure

- Skin and flesh should be red, then they're real, not like it was in social realism, for example, when the work leaders' faces where absurdly blue and yellow. 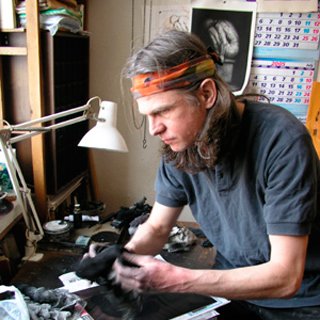 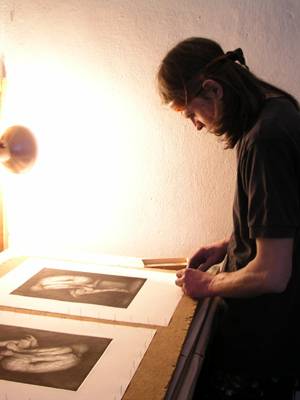