The Journal Written with Images or Enigma

His first diary he wrote with words. A lot of words, emotions, current affairs.

‘Someone actually read that diary of mine,’ says Jacek.

He won’t say who. And it doesn’t really matter now. The secret, the privacy, the intimacy was shattered like a Christmas bauble. Not only were they as thin as the bauble glass, but also they left behind some tiny prickly needle-like bits. An icy splinter, just like the one in Kai’s heart.

He then had to find a way to cipher his notes, so he began painting them.

For a stranger, or even a close relative, the painted diary is ‘readable’ to a very limited extent, only partially. Naturally you can make guesses, but you can never be sure. It’s possible to interpret things, but always without the punch line. It may seem to be something important or only a series of automatically made notes, a kind of reflexive scribble.

A confession or just playing with a pencil.

Everyday life consists of a list of errands: a car battery, a dentist appointment, mowing the lawn. The kids’ English class, coffee, tea. Lemons, rolls, challah. Medical tests, a visit to the post office or bank, a newspaper. Breakfast, lunch, dinner, roof tiles, an old film. And round and round it goes.

What’s left in the notepad after the morning at the table is a red tea-pot, the sun as round as an orange.

After hospital – a single bed.

The usual home objects, fruit, accidental words or commands are always only the background to the female figure. The focus of the diary, the crux of life. The diary from 10 years ago is still lying on the table in the atelier. There is no need to hide it, there is no need to be worried about the secret.

The second life of the diary is staged in the paintings. Jacek Cyganek takes single motifs from the notepad – a female profile, breasts, a slender figure, a pear, an apple and chimney smoke, as if he was taking pieces of his own life, the days gone by, scraps of memories. He arranges them in his paintings as if they were pieces of a puzzle or, actually, he does not arrange them but disarranges them, since his compositions are sort of disarrangements, scrambles. If he realizes there is too much of something or it does not match the rest, he just paints over it, but in such a manner that the silhouettes of people and outlines of objects are still visible through translucent paint. And this intensifies the secrecy of matters, the mysteriousness of the story. When looking at his paintings, the audience feels the urge to satisfy their curiosity and to break the code.

When it comes to his style, there are traces of French Cubism, Fernand Léger, and the Polish School of Posters, the charming children’s cartoon films from the 1960’s, beautiful and funny book illustrations.

And in the background, or at the base, it gets even more serious and more transcendental – icons, Jerzy Nowosielski and the Russian Suprematism with its whole cosmology by Kazimierz Malewicz, the fascination with solids and space. The artist’s private experiences are also told, but not fully, since privacy is lost somewhere and transformed into more universal stories. 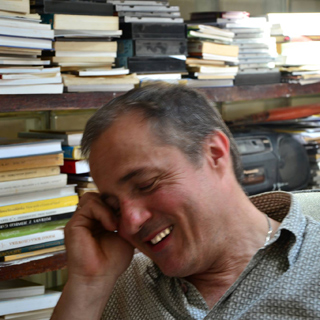 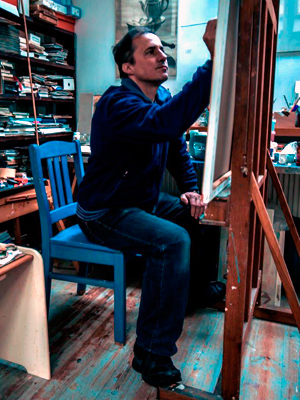