Katarzyna Castellini’s paintings is not a report from a trip to Italy. It used to be one, though, some time ago. But the report was rather strange. The artist is an intelligent observer; she has recorded in her paintings many scenes and characters of Italian provenance. But with time, she ceased being keen on multiplying picturesque details. Instead, she started aiming at a synthesis; painting by painting, a concept was emerging to depict an image of mankind in general, though taking the Italian observations as a starting point. 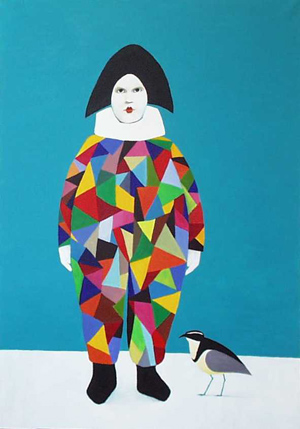 Yet, is anyone still capable of saying anything serious, by painting pictures on canvas? Can one paint images being so serious as those by Andrzej Wróblewski? Since any opera seria is no more possible, an opera buffa is what remains – the genre saying less on the human condition, but in a different tone. 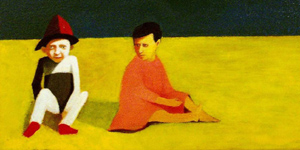 Some of the Castellini paintings are mysterious allegories. They contain some hermetic contents; their symbolic interpretations may be multiplied. Why should the woman with an infant be dressed in black? Why should (the) animals be so important? Is it so, perhaps, that their occurrence opens to people access to some higher ways of cognition? Are we really seeing the beach at Falconara? Or, maybe, this is a kingdom of the dead, already there? Or maybe, a circus arena? What is the meaning behind those masquerades? On which side of the omnipresent arcades there live the characters of the paintings?

The presence of jesters, harlequins, tightrope walkers means signifying those who are able to humbly accept the truth about themselves. If we learn how to watch things carefully, all our clothes will appear to be a clown’s dress, with baubles sown onto it. But, the clown, being funny and tragic at the same time, has a gift of reconciling the opposites. He can be here and there, be a man and/or a woman, an old man and/or a child. An artist is someone who can transgress borders, and who, with an insolent courage, perpetrates blasphemies; and, is capable of merging a noble Renaissance and a loud and garish pop-art.