Ciro Beltrán has something about himself which is called obsession by some, or mission by others. While talking to people, he would often mention ”hiding” and ”discovering”. He strives for discovering the truth, the one spelled with a block ”T”. 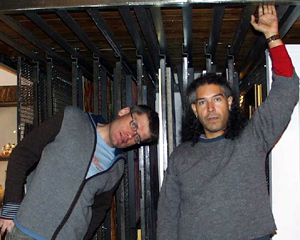 Sometimes he conceives ”scientific” titles for his paintings, such as Catalogue of Landscape, Annals of Anthropology, and sometimes, some quite down-to-earth ones (Shaving Lotion, Snail Pranks).

But this is no mockery: Beltrán combines the ”general” with the ”particular”, not willing to lose sight of either. He speculates and systematises, but also, he poetises. He renders the poles of a micro-world and a macro-world close to each other. And, between contradictions, he spreads the cobweb of cognition, an esoteric cognition indeed.

He pursues what our European ”common sense” tells us not to do. Had he lived in 16th century, he would have been an alchemist. But he happens to live in our contemporary time; so, he is a painter.