Ciro Beltrán as a painter

Ciro Beltrán represents the young generation of contemporary Chilean painters. In the latter half of 1980’s, he studied painting in Higher School of Arts, University of Santiago; in 1995-1998, he attended painting classes at the Kunstakademie of Düsseldorf, Germany. This is probably the reason for why his painting appears equally strongly inspired by South-American and European sources.

The particularly attractive factor in Beltrán’s painting is an intense and warm colouring, in the first place. Abstract, flat-painted surfaces of saturated colours constitute backgrounds to geometrical structures, as if a plaited wire of sorts, suspended. Some of these forms may make one think of dish shapes (or those of hourglasses? chemical test-tube systems? measuring cylinders?) of unknown purpose; with others, kindship with human body is astonishing. Deep down these mysterious systems, Roberto Matta’s paintings are echoed. Both artists shape the space in a similar manner. The structures they create appear as if suspended, and forcefully extended in an undetermined colourful space. However, as opposed to dramatic/fantastic visions of Matta, does Beltrán saturate his paintings with a poetic climate and mysteriousness.

Another, and more decipherable, reference point in Ciro Beltrán’s output is no doubt ”painting of the matter”. The fleshy, living texture of colour triggers associations with some organic coatings, whereas as combined with sallow colours of some of the pictures would it suggest that relations with the informel art current of 1950’s and 1960’s. That this particular direction is close to Beltrán, is indicated by yet another track, namely his ingenuity in making use of some new materials. The ground for a series of his paintings of the nineteen-nineties are ordinary carpets. By using this commonplace material, the paintings have gained a specific texture and, most of them, quite an irregular shape.

Untypical ground is not the only novelty about these projects. The ”carpet paintings“ are namely two-sided. All this allows Beltrán not only to create a new formal quality but also to propose an ingenuous concept of painting. He resumes once again a conceptual discourse on the essence of painted picture. The latter is no more but a ”flat surface covered by paints in a defined sequence” – it becomes a spatial object whose reverse is its immanent part. The artist confirms conceptual sources of his painting art whilst also stressing that it is a thinking process in the first place. In formal terms, the ”carpet pictures” are more subdued in colouring, quiet, quite simple, and purist: simplified forms are accompanied by a narrow colouring array. In certain cases does this restraint causes that these seem merely gloomy.

The present exhibition, however, renders the viewer better acquainted with Ciro Beltrán’s ”brighter” paintings: these are predominantly warm, somewhat exotic in a South-American manner, which is due in the first place to the colours used. In those pain-tings, the warmth of orange and sandy yellow is combined with the optimism of green. Speaking of colour on this occasion is worthwhile. Beltrán himself refers to German Romanticist artists, primarily to Goethe’s colour concept which concerns psycholo-gical and symbolic influence of colours. Like a me-diaeval artist, Beltrán records meanings in colours: yellow equals light, light-blue contains the air, spiri-tuality, and mystery. Red unites and makes reciprocal contrasts of everything, with its intensity.

With his painting, Beltran attempts at restoring the art’s secret quality and its ability of triggering mystical states. No surprise, then, that he has selected the German bard as his spiritual father and referred to the tradition of German Romanticist art. In parallel, he is a poet. And, simultaneously, he wants to remain a modern artist by enlivening the relationships with the avant-garde art of the decades of 1950’s, 1960’s, and 1970’s. Slightly eclectically so, ”postmodernistically”, and, in the first place, aesthetically so. 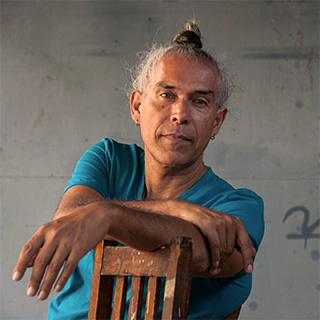 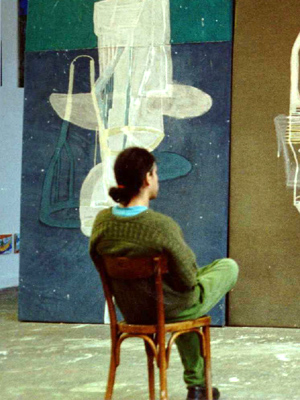